Starbucks earnings preview: Bears have woken up after the rally

Coffee chain Starbucks (NASDAQ: SBUX) has been witnessing a splendid ride in the stock market since the start of this year. The stock has gained 18.7%, outperforming the S&P 500 index, which has increased 16.8% during the same period.

The company is now set to report second-quarter financial results after the closing bell on Thursday, April 25. Analysts expect Starbucks to report a 4.6% increase in net sales to $6.31 billion, with global same-store sales projection pegged at 3%.

EPS target has been set at 56 cents per share, three cents higher than what it reported in the second quarter of last year.

As the company approaches its second-quarter earnings results, there are concerns that the stock is overbought. Last week, Andrew Charles of Cowen raised the price target on the coffee chain from $63 to $69. However, the new price is still at a 9% discount from the current trading price.

Charles’ logic behind the price target increase was that an accounting change at Starbucks would help the company realize higher interest income from gift cards, in turn improving its margins.  The extra revenues, the analyst believes, would be used to step up its promotional programs.

Another concern facing Starbucks is the increasing competition it faces in China, its second-biggest market. We had earlier reported how Chinese coffee joint Luckin Coffee is offering stiff resistance to Starbucks’ growth, by offering affordable coffee on the go.

Earlier this week, Luckin filed for a US IPO, to reportedly raise up to $800 million. All this has contributed to a recent spike in short interest in SBUX stock. 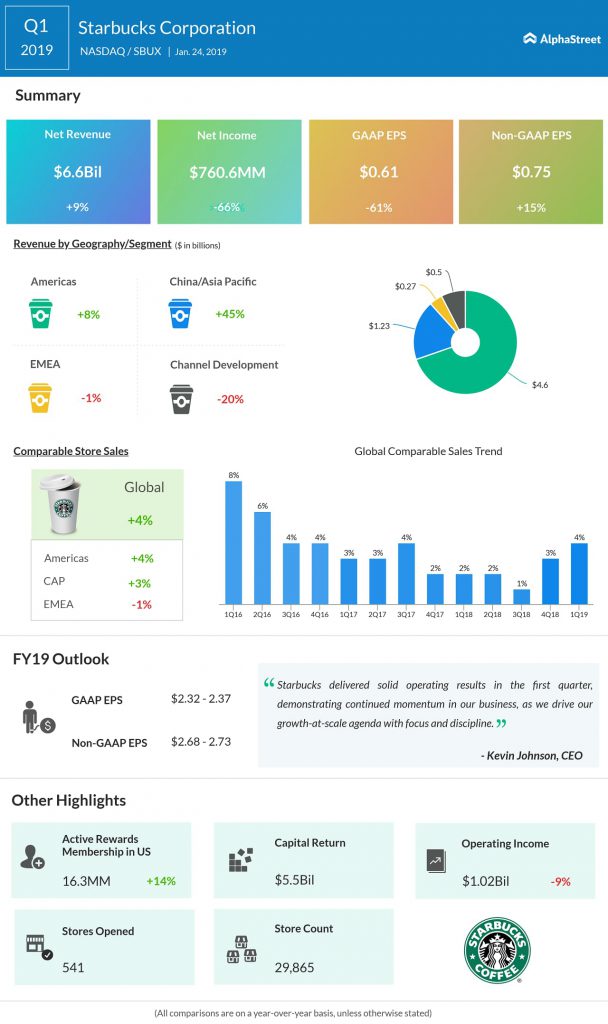 On the flip side, Starbucks is betting on its loyalty program to boost its second-quarter results. In Q1, over 1 million new customers joined its Rewards loyalty program, representing a 14% growth from the same period last year.

Separately, the company recently created a venture capital fund – Valor Siren Ventures 1 – in partnership with Valor Equity Partners to identify and invest in food/retail related start-ups. This is also likely to benefit Starbucks in the long term.

The stock has a 12-month average price target of $74.75, which is at a 2% upside from the last close. But this should not stop a rally if the results are good enough.