In the first quarter of 2023, earnings dropped 21% despite an increase in revenues, and missed the estimates

Transportation stocks suffered this week after FedEx Corporation (NYSE: FDX) reported unimpressive preliminary results for the first quarter of 2023. The cargo giant’s shares were down 24% soon after the announcement. The pessimism spurred by the weaker-than-expected results and cautious outlook is reflected in the performance of the company’s arch-rival United Parcel Service, Inc. (NYSE: UPS) also.

Another loser is Amazon.com, Inc. (NASDAQ: AMZN), which is looking to become self-reliant in parcel delivery by expanding its transportation capabilities — raising speculation that excess logistics capacity at the eCommerce firm would become a threat to the legacy freight companies. Shares of both UPS and Amazon dropped following FedEx’s earnings release.

The market opened sharply lower on Friday and continued to lose in the early hours amid growing recession fears, after FedEx executives said macroeconomic uncertainties might deepen in the coming months. The company also withdrew the full-year earnings guidance it provided earlier, adding to the fears of an impending global recession.

The poor earnings performance in the first quarter can be attributed to a general slump in freight volumes globally, and the slowdown is likely to extend beyond the second quarter. The failure of a global leader like FedEx to deliver, amid a widespread decline in freight volumes across all categories, is probably reflective of the poor health of the world economy. 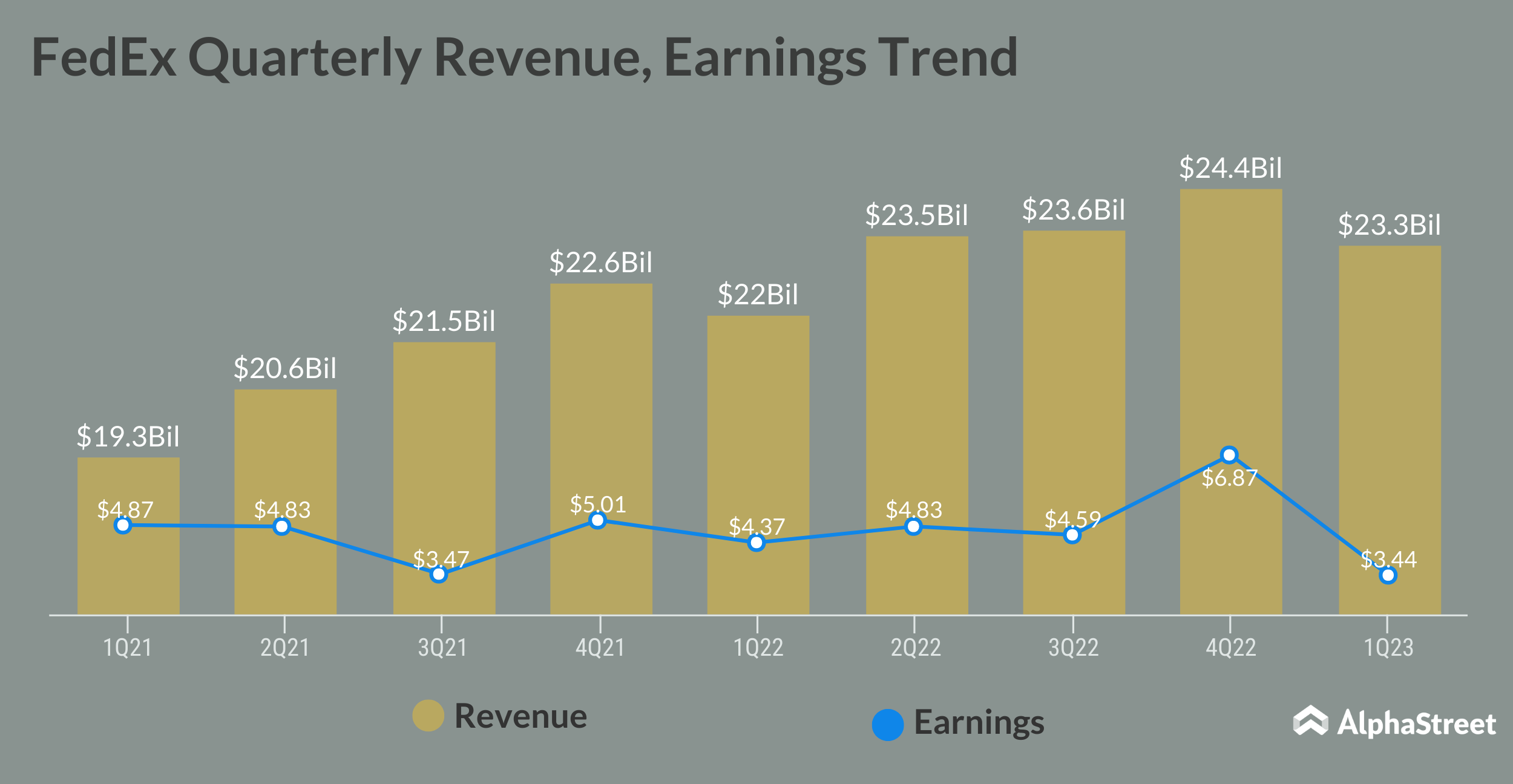 The company in its interim earnings report said first-quarter profit, adjusted for special items, declined by a fifth to $3.44 per share from $4.37 per share last year, despite a 5% increase in revenues to $23.2 billion. Unadjusted profit fell to $1.19 billion or $3.33 per share from $1.40 billion or $4.09 per share. The weak numbers, which also fell short of expectations, weighed on market sentiment and triggered a stock selloff.

Though the company had adopted various measures to optimize its cost base, those actions were insufficient to offset the impact of volume declines. And, margins were dragged down by elevated operating expenses. Meanwhile, efforts are on to enhance the cost reduction efforts and take additional steps to increase productivity. The initiatives complement the growth strategy laid down by the management earlier this year and are expected to help the company meet its 2025 financial targets.

Taking a cue from the lingering uncertainty and the bleak economic outlook that prompted the FedEx management to pull its guidance, the market will be closely following the earnings announcement of United Parcel Service, which is expected next month.

“Global volumes declined as macroeconomic trends significantly worsened later in the quarter, both internationally and in the U.S. We are swiftly addressing these headwinds, but given the speed at which conditions shifted, first quarter results are below our expectations. While this performance is disappointing, we are aggressively accelerating cost reduction efforts and evaluating additional measures to enhance productivity, reduce variable costs, and implement structural cost-reduction initiatives,” said FedEx’s CEO Raj Subramaniam.

After staying mostly resilient to the market selloff in recent months, FDX has experienced one of the biggest single-day losses and traded at a two-year low on Friday.