T-Mobile (TMUS) looks to beat short-term setbacks with 5G power. Is the stock a buy?

It is estimated that the company's mid-band and low-band 5G networks are serving 190 million and 308 million customers, respectively

Over the years, T-Mobile US, Inc. (NASDAQ: TMUS) has steadily expanded its subscriber base and the momentum was not lost during the pandemic, rather the telecom major stayed on the growth path, riding its high-speed wireless capabilities and synergies from the Sprint merger.

T-Mobile’s stock has been in a free-fall after peaking mid-year and it slipped to a one-year low recently. However, the stock bounced back this week following the company’s positive third-quarter report, paring a part of the losses. Market watchers recommend buying TMUS almost unanimously, citing its impressive long-term growth prospects – as much as 35% in the next twelve months. After the recent dip, T-Mobile has become an investment option most investors would want to consider.

The Bellevue-based telco has been banking on its aggressive 5G expansion to dominate the wireless communication space, with the multi-spectrum strategy giving it an edge over rivals. Currently, the carrier’s mid-band and low-band 5G networks serve around 190 million and 308 million customers, respectively. It continues to expand into new markets and underserved areas, with new services like Home Internet. Recently, the company launched a promotional offer to provide the Paramount Plus streaming service free of cost for one year. 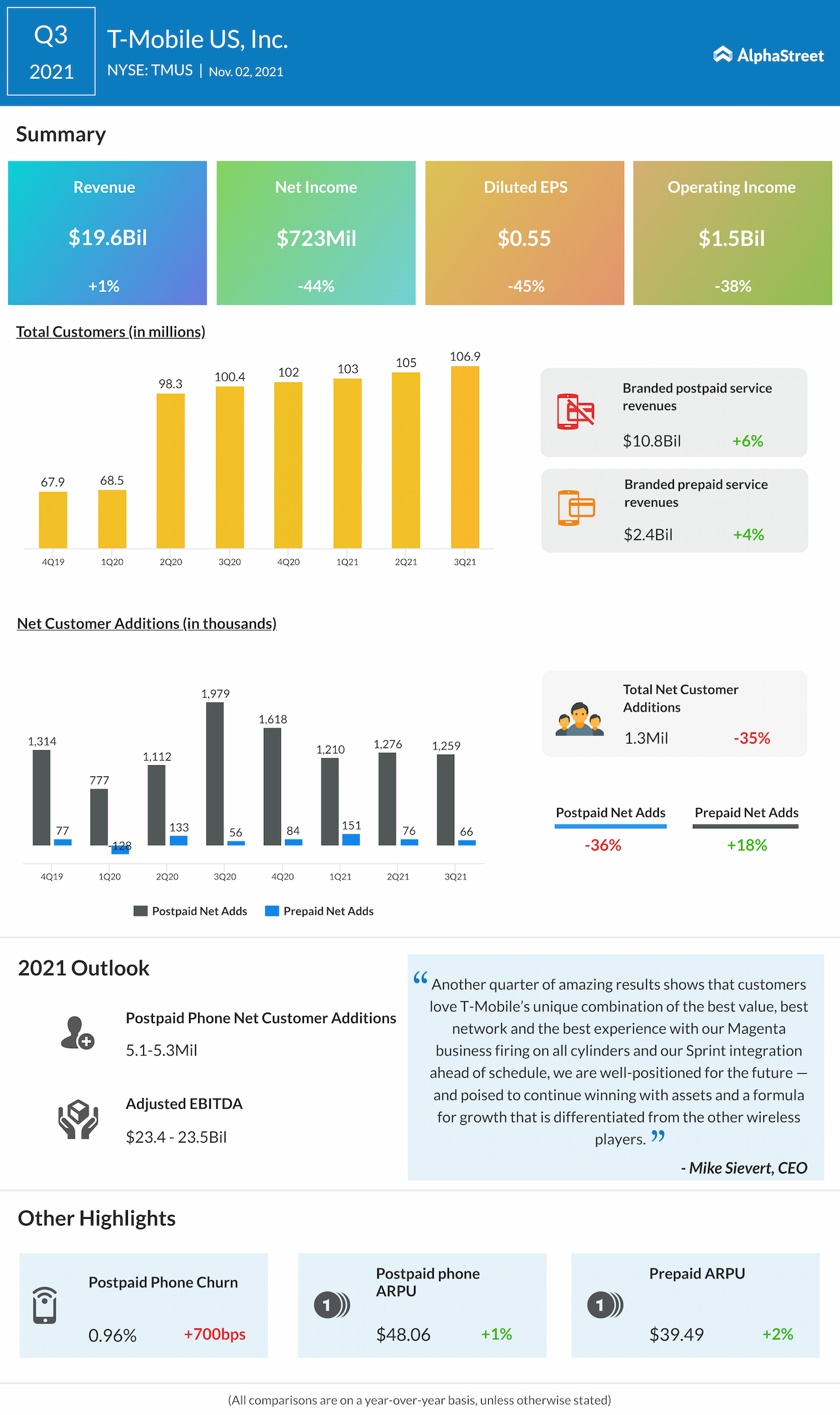 In the third quarter, T-Mobile added around 673,000 new post-paid customers, which is almost in line with the estimates, and reached a total of 107 million customers. Though earnings decreased 45% to $0.55 per share, they topped expectations. Meanwhile, revenues edged up 1% to $19.6 billion, with service revenue reaching a record high of $14.7 billion.

It seems the recent cyberattack on the company’s systems and customers did not materially affect subscriber growth, though the incident triggered a stock selloff back in August. The ongoing integration of the customers of Sprint, which became a part of T-Mobile through a merger last year, should give the company an advantage over peers in the long run. The management aims to reach 500,000 subscribers by year-end.

Lawsuits related to the data breach and apprehension among customers over data security might weigh on future performance, especially new customer wins. However, the company should be able to overcome the setback with the help of its successful business strategy.

“Protecting our customers’ data is a top priority for the company, which is why we’ve taken a number of steps to respond to this incident. And I’ve created the Cyber Transformation Office, reporting directly to me, elevating our cybersecurity team and this work accordingly. We’re further building a security forward mindset into our work and our culture, and we’re partnering with the best and the brightest like Mandiant and KPMG to help us do it right.”

Earlier, AT&T, Inc. (NYSE: T) and Verizon Communications Inc. (NYSE: VZ)  reported strong subscription growth for their most recent quarters. Their adjusted earnings grew in double digits to $0.87 per share and $1.41 per share respectively in the third quarter, despite moderate top-line performance.

Shares of T-Mobile have lost about 10% so far this year. The stock, which has been languishing at a twelve-month low for some time, got a major boost after the earnings announcement this week. It traded higher in the early hours of Thursday, after closing the previous session at $155.8.