Tesla, Inc. (NASDAQ: TSLA) once again delivered blockbuster quarterly results this week, after navigating effectively through the multiple challenges of COVID-induced supply chain meltdown and the deepening chip shortage. The electric car giant’s stock has increased multifold since early last year, all along outperforming the industry. On Thursday, it rallied and reached a record high.

Since most of the positive elements are already factored into the price, the current valuation is on the higher side and it looks like a pullback is imminent. The consensus target price indicates a decline in the coming months, which calls for caution as far as buying/selling is concerned. It would be a good idea to keep an eye on the stock until a clearer picture emerges.

Proving naysayers wrong once again, the company delivered a record number of vehicles in the third quarter by adopting prudent measures to ensure adequate capacity at its production facilities across markets. The management is planning to increase output further, considering the heavy backlog. The focus will be on expanding Model-Y production in Austin and Berlin, besides overall capacity expansion in Shanghai and Fremont. The strategy is in line with its long-term goal of achieving an average growth rate of 50% per year.

Meanwhile, to the surprise of the investment community and market watchers, Tesla’s CEO Elon Musk stayed away from the third-quarter earnings conference call. He had hinted earlier that he would attend earnings calls only if it is necessary. 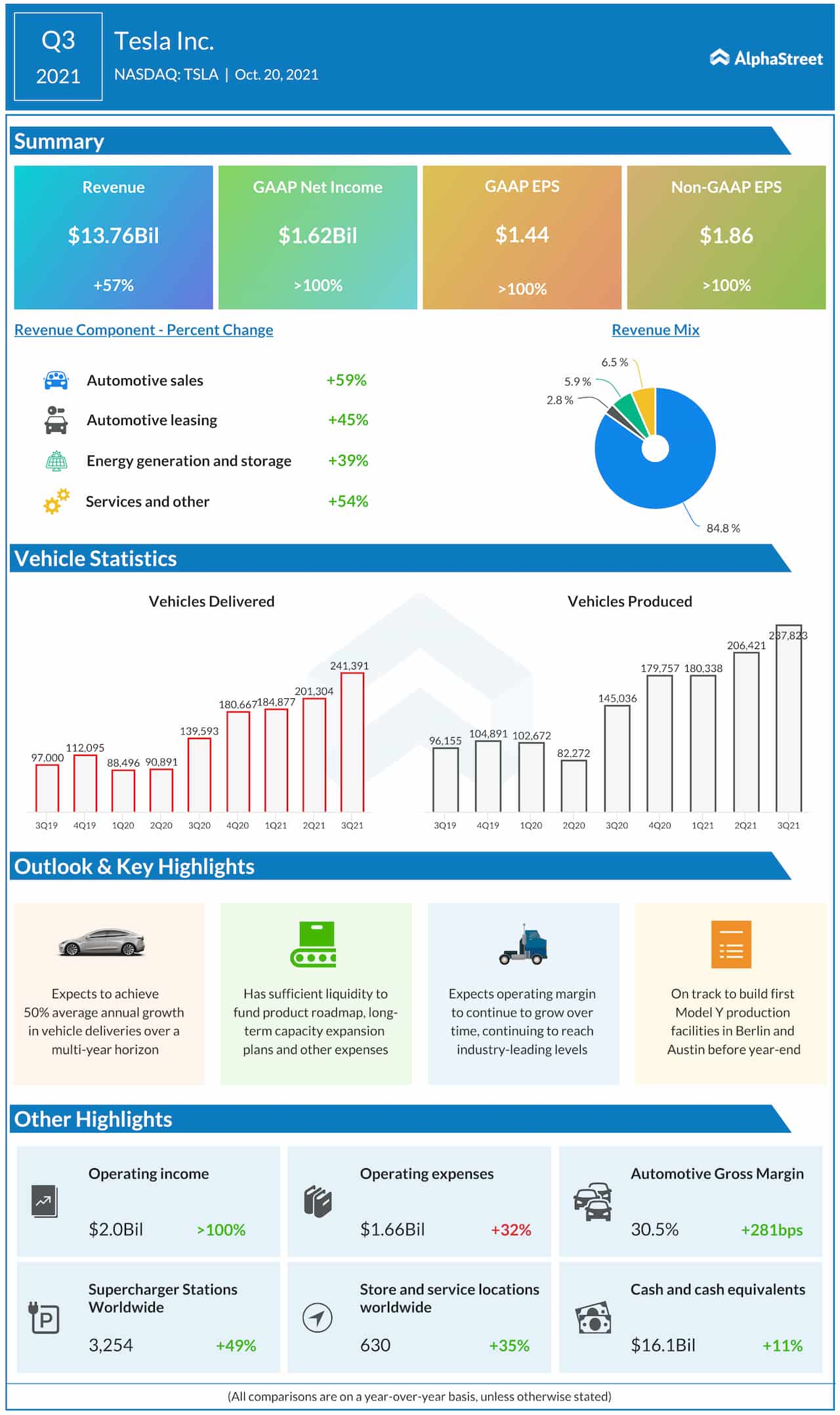 “We’re working on a strategy to increase our production rates as quickly as possible. And we’re doing this while trying to add the least amount of incremental complexity to the business. We don’t want to add any new vehicles to our lineup when we’re generally in a cell-constrained world.”

Quarterly earnings grew consistently ever since the company turned profitable two years ago, and mostly topped expectations. While it registered growth in all the key financial metrics, operating expenses remained elevated, signaling pressure on margins. For Tesla, it is important to ensure a flawless support system that is capable of providing prompt service to its rapidly growing customer base – an area where the company is currently lacking. Another concern is its heavy investments in advanced technologies like self-driving, which face uncertainties due to the tightening regulatory environment.

“Supply chain challenges, including expedites, continue to provide cost headwinds as was also the case with FX this quarter. While we are seeing an impact from the rise in commodity and labor costs, we have also been adjusting pricing, which should help to compensate,” said Tesla’s chief financial officer Zachary Kirkhorn.

In the third quarter, adjusted profit climbed to an all-time high of $1.86 per share, far exceeding the market’s prediction. It was driven by record deliveries that resulted in a 57% jump in revenues to $13.76 billion, thanks to the growing demand for Tesla cars. The company produced a total of 237,823 vehicles during the three-month period and delivered 241,391 units.

The shares of Tesla were almost flat after the earnings release but made strong gains in the early hours of Thursday. They closed the last trading session at $864.27, which is sharply above the 52-week average.