Teva Pharmaceutical (NYSE: TEVA) has long endued uncertainties in business even as the generic drug maker continued its efforts to tackle high debt and falling sales. When the company reports first-quarter results Thursday early morning, the market will be looking for updates on the performance of the products launched recently.

Analysts predict that earnings will fall 38% to $0.58 per share on revenues of $4.38 billion, which represents a 14% year-over-year decline. In all of the preceding four quarters, earnings surpassed Wall Street’s prediction, and the trend is expected to continue this time. 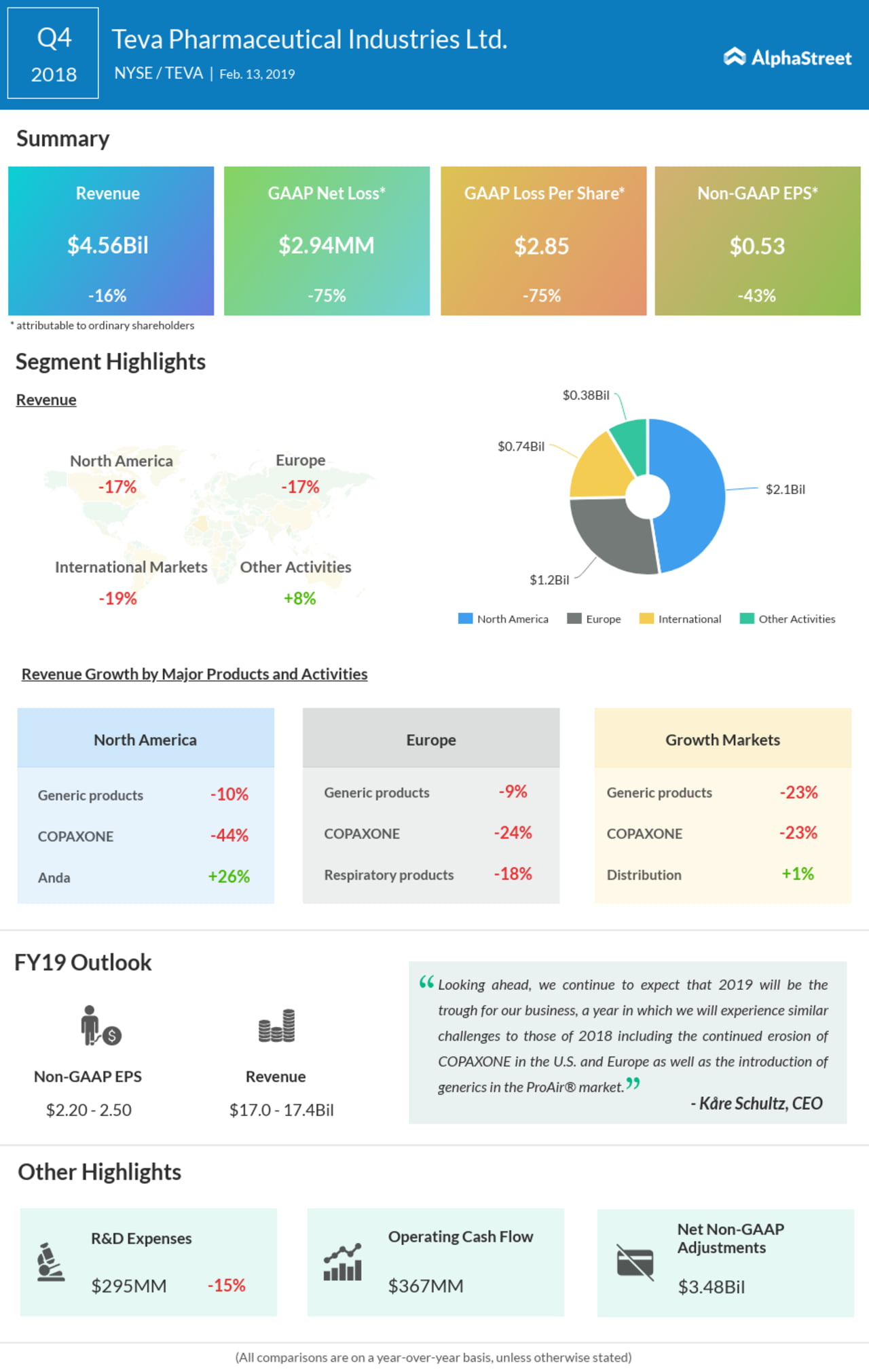 When it comes to sales, it has been a mixed bag for the company in recent quarters.  For instance, newly launched migraine drug Ajovy and Austedo – indicated for the treatment of Huntington’s disease – were well received by the market. Meanwhile, the erosion of the market share of Teva’s flagship product Copaxone, following the entry of generic alternatives, remained a cause for worry.

This year, sales might come under pressure from losses incurred from the discontinuation of operations in international markets, especially in Europe.

Analysts predict that the company will report a 38% decline in earnings to $0.58 per share on revenues of $4.38 billion

Of late, the North American operations have been impacted by the unfavorable pricing environment and softness in the sales of certain key products, mainly sclerosis drugs. Some branded products also face a threat from their generic counterparts. However, there are indications that generic drug pricing is improving in the US as new products continue to enter the market.

Margins are estimated to have improved in the first three months of the year, aided by the cost reduction initiatives under the company’s ongoing restructuring program. It is believed that Teva is probably headed to a much-needed turnaround, regaining the lost momentum by next year.

In the fourth quarter, there was a double-digit contraction in revenues and profit as all the key geographical regions witnessed a slump in sales. Revenues slipped 16% to $4.6 billion and earnings fell 43% $0.53 per share.

The relatively low price of Teva’s stock, which is severely undervalued, combined with the bullish view among a section of market watchers on the company’s long-term prospects, makes it an investment option worth considering ahead of the earnings report. Meanwhile, the high debt level and weakening sales, which continues to weigh down on investor sentiment, call for caution.

For long, Teva’s performance at the stock market has been quite dismal as it remained in a perpetual downward spiral, all along underperforming the industry. The stock declined by 15% since last year and hit an 18-month low this month.