Drugmaker Teva Pharmaceutical (NYSE: TEVA) reported a decline in first-quarter adjusted earnings, owing to a 15% fall in revenues as the company continues to face stiff competition in the generic market. Though earnings surpassed analysts’ forecast, the stock dropped early Thursday. 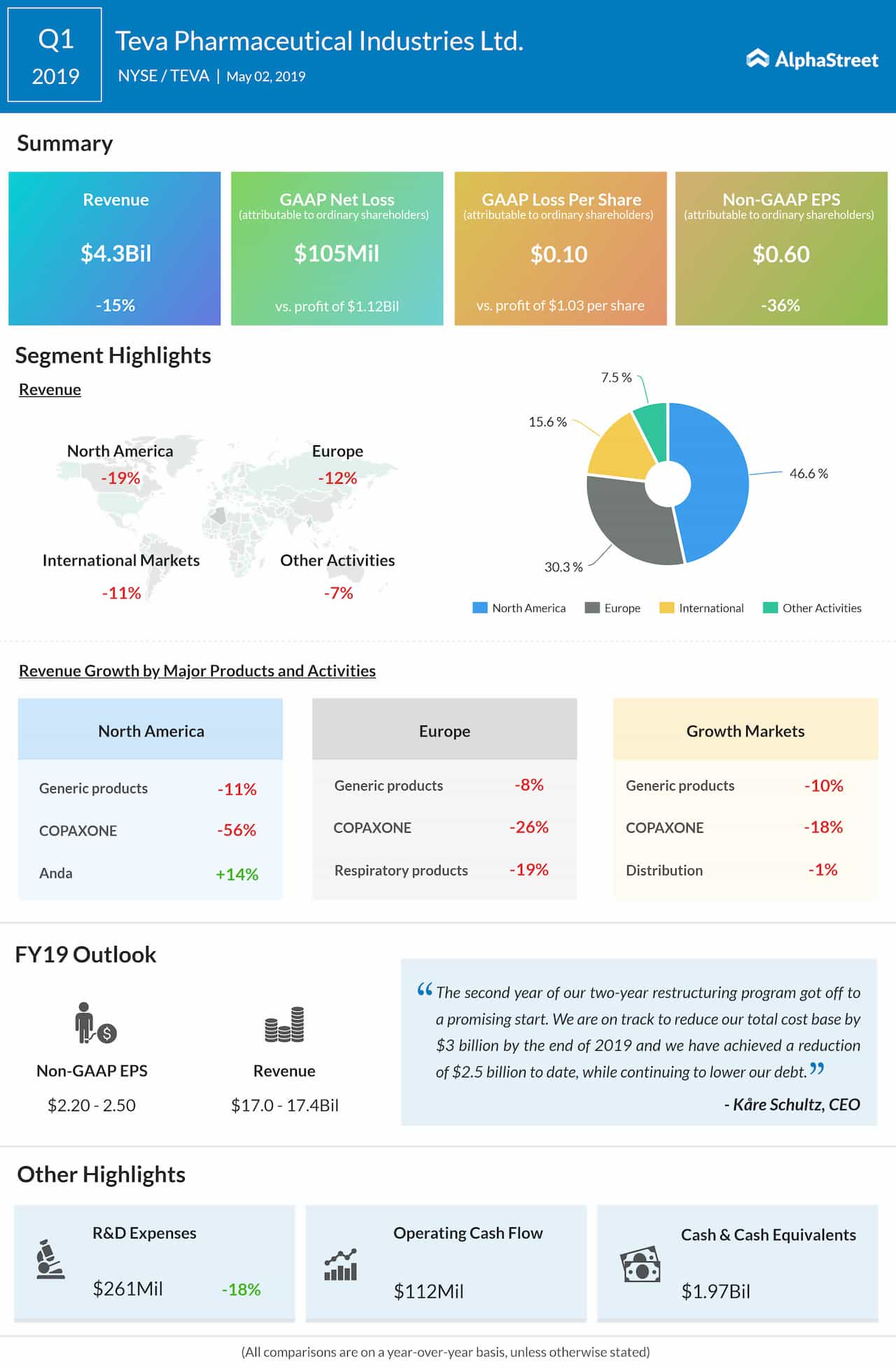 Earnings, excluding one-off items, dropped to $0.60 per share from $0.94 per share in the first quarter of last year but came in above the forecast. On a reported basis, the company posted a net loss of $105 million or $0.10 per share for the March quarter, compared to a profit of $1.1 billion or $1.03 per share a year earlier.

The bottom line was dragged by unfavorable currency exchange rates and a 15% decrease in revenues to $4.29 billion, hurt mainly by stiff competition to the company’s flagship product Copaxone. The top-line slump can also be attributed to lower sales of respiratory products and general weakness in the US generics business. Revenues fell short of the market’s prediction.

The bottom line was impacted by unfavorable currency exchange rates and a 15% decrease in revenues to $4.29 billion

In North America, there was a 19% fall in revenues mainly due to muted demand for Copaxone, which was partially offset by a strong performance by Anda, Asutedo and the recently launched Ajovy. Copaxone’s slowdown impacted the European operations also, with revenues falling about 12%. Revenues from the international market were down 11% year-on-year, with Japan being the primary contributor to the contraction.

The squeeze on margins was partially offset by a decline in operating expenses. Selling and marketing expenses dropped by 12%, while general and administrative expenses decreased 11%. There was an 18% fall in R&D expenses.

Kare Schultz, Teva’s CEO, said, “We faced the expected loss of exclusivities of key products COPAXONE and ProAir to generic competition. Our focus is on stabilizing our global generics business and ensuring the success of our long-term organic growth drivers, especially AJOVY and AUSTEDO.”

Meanwhile, the management reaffirmed its previously issued full-year revenue and earnings guidance. Teva said it achieved spend-base reduction of about $2.5 billion since launching the restructuring program last year and expects to raise the amount to $3 billion by year-end.

For long, Teva’s performance at the stock market has been dismal as it remained in a perpetual downward spiral, all along underperforming the industry. The stock declined by 15% since last year and hit an 18-month low recently. It lost about 2% following the earnings report Thursday.