Earnings Preview: Coca-Cola to take on Pepsi with impressive product mix in Q4

Soda giant The Coca-Cola Company (KO) is expected to announce its fourth-quarter 2018 earnings on Feb. 14, before the opening bell.

For the past six quarters, Coca-Cola has beaten Street estimates. Moreover, in the last five quarters, it also beat the sales consensus.

For the reporting period, analysts estimate Coca-Cola to make about $7.05 billion in sales and generate 43 cents per share.

Despite various setbacks, Coca-Cola seems to be on track to save about $3.8 billion by 2019, helped by productivity programs. Along with that, the soda giant’s strategy of using its brands more effectively on a global scenario. This seems to have bolstered investor sentiment, for the stock has gained more than 14% in the last year, while the entire industry has slipped over 5%.

However, in the fourth quarter, rising freight and input costs came to haunt Coca-Cola, and this led to a price increase. How the entire set of factors are going to affect the top-line and bottom-line is yet to be seen, but the company expects unfavorable exchange rates to hurt its results. Currency headwinds are expected to impact the comparable operating income by 10-11% in the quarter.

In the previously reported third quarter, Coca-Cola saw revenue fall 9% on the negative impact of re-franchising the bottling operations.

But the solid price per mix and higher unit case volume lifted the EMEA division results then. 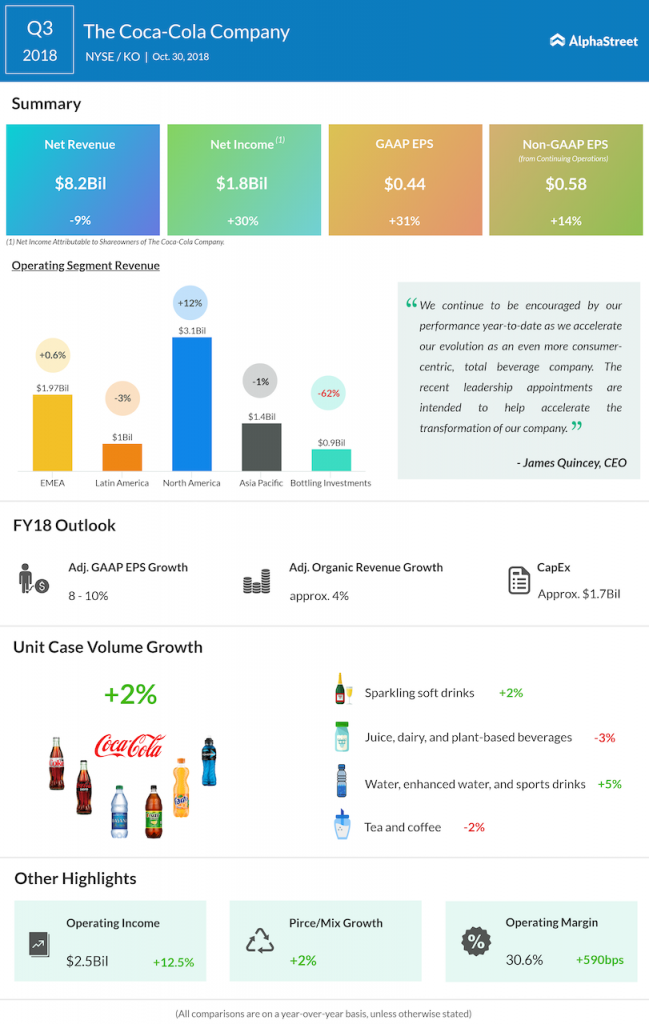 The Latin America division’s revenue shot up 11% then on Mexico performance and pricing in Argentina. These are expected to favorably affect this time around as well.

Coca-Cola is looking at a positive result when it posts its earnings later this week, mostly due to its solid diversification of products and brands across the globe and how its re-franchising have panned out. As rival PepsiCo (PEP) also posts its results later in the week, we’ll know who really won the Cola Wars this time around.