US weapon makers top in the world; Defense stocks jump

Weapon sales at the top 100 arms producers in the world rose 2.5% in 2017 to $398.2 billion, according to data revealed by Stockholm International Peace Research Institute (Sipri). The report added that this was the third consecutive sales growth for the top 100.

Lockheed Martin (LMT) continues to be on top of the world, registering almost $45 billion in weapon sales in 2017. Lockheed Martin is followed by two other US companies – Boeing (BA) and Raytheon (RTN) – at the second and third spots respectively. 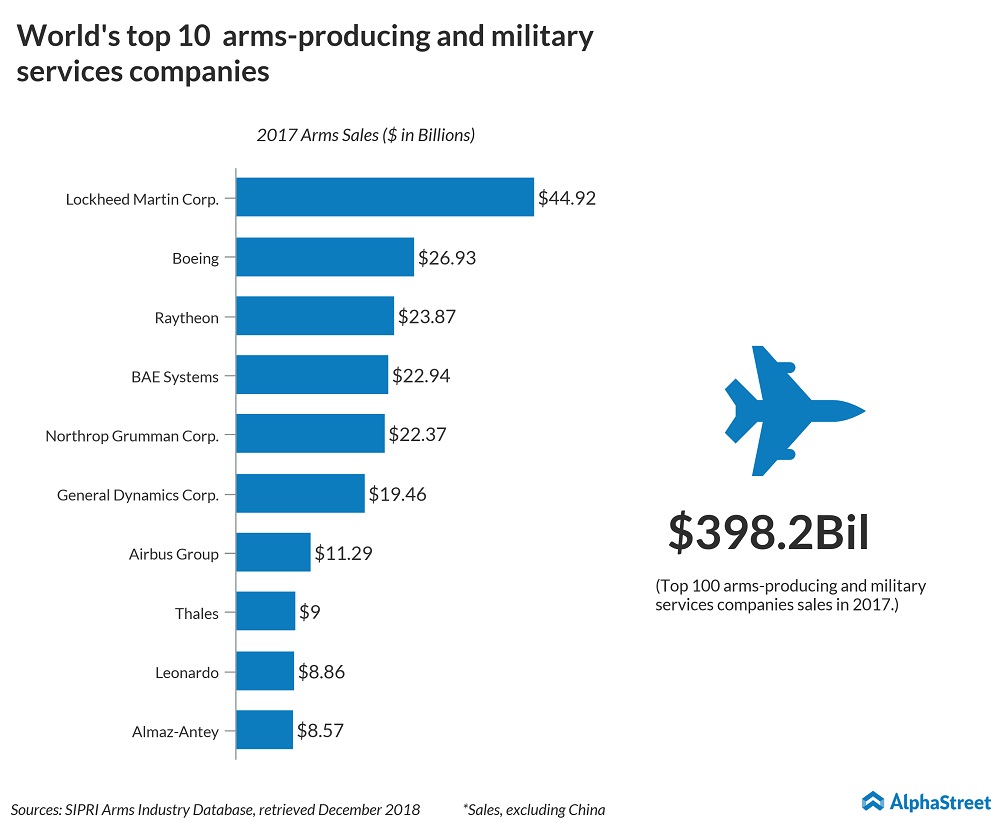 Boeing is a far second with sales at $26.93 billion, while Raytheon has recorded $23.87 billion in sales during this period. Other US companies to made it into the top 10 list include Northrop Grumman (NOC) and General Dynamics (GD) at the fifth and sixth spots.

Most of these stocks gained during intra-day trading on Monday. LMT gained 3.6%; RTN jumped 3.4%; NOC rose 4.6%; GD improved 1.9% at 2PM ET. BA shares continued to fluctuate between red and green.

The US is a dominant force in the global arms manufacturing industry, with 42 out of the top 100 belonging to this country.  Weapon sales by these US companies alone contributed $226.6 billion of the total sales, 2% higher than 2016. Aude Fleurant, Director of SIPRI’s Arms and Military Expenditure Programme, said US companies directly benefit from the US Department of Defense’s ongoing demand for weapons.

Meanwhile, Russia surpassed the UK to become the second largest supplier in 2017. The year also marked the first time that a Russian company made it to the top 10. The country’s largest arms manufacturer, Almaz-Antey, came tenth with total sales of $8.6 billion, up 17% from last year.

Siemon Wezeman, Senior Researcher with SIPRI’s Arms and Military Expenditure Programme said, “Russian companies have experienced significant growth in their arms sales since 2011. This is in line with Russia’s increased spending on arms procurement to modernize its armed forces.”