What to expect from Visa’s Q4 earnings report card?

Digital payment platform Visa Inc (NYSE: V) will be reporting its fiscal Q4 and full-year 2019 earnings results tomorrow after the market closes. The recent acquisitions, partnership deals and Visa’s strategic moves to expand the company’s services beyond cards like Visa Direct and B2B Connect are likely to benefit it in the recently ended quarter and in the future. 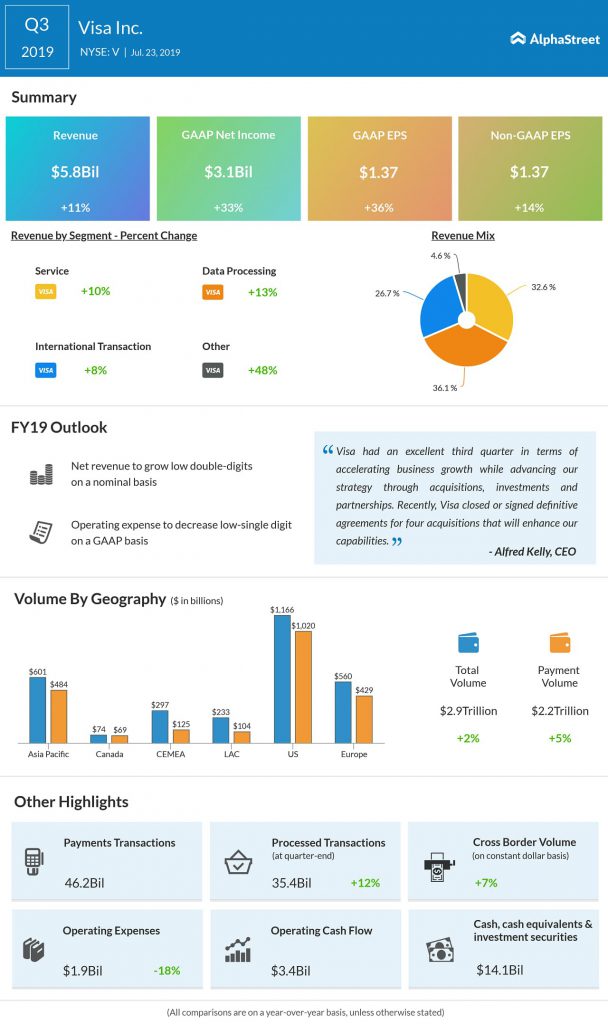 During the third quarter, Visa acquired Verifi and Rambus Payments Payments Portfolio. As expected, both of these acquisitions were completed in the fourth quarter. In July, Visa acquired Payworks and also obtained the full legal ownership of Earthport. Today, Visa announced Visa Infinite Business, the expansion of its business card product suite in the United States, which is designed for tge fast-growing small businesses with higher spending need.

During September end, Visa and the European fintech firm Revolut announced a new agreement that will help Revolut expand its business globally. Under the terms of the agreement, Revolut will primarily issue Visa-branded cards in the global expansion. In September, the company also reported that its B2B Connect network has doubled its reach, from 30 global trade corridors at launch in June 2019, to 62, with the goal to expand to over 100 countries in 2020.

For the fiscal year 2019, Visa maintained the revenue growth at low-double digits on a nominal basis. The company projected class A common stock earnings per share growth to be in low twenties on a GAAP nominal-dollar basis and mid-to-high teens on an adjusted nominal-dollar basis.

When reporting the third quarter results, Visa projected fourth quarter revenue growth to be moderately better than the third quarter. Fourth quarter expense growth is expected to be in the mid to high single-digit range. Despite Q3 results topped estimates the cut in the profit guidance led the stock to trade in the negative territory.

During the third quarter earnings conference call, Visa stated that it had signed a non-binding letter of intent to join Facebook’s Libra. The management added that out of the 27 companies that expressed interest in assoicating with Facebook, no one had officially joined at that time. The company might discuss about Facebook Libra association during the fourth quarter earnings call.

Visa stock, which was trading flat during midday, had advanced 29% so far this year and 23% from this time last year.