Increases capital expenditure to $14 billion this year, with focus on investments in areas like e-commerce and supply chain

Walmart, Inc. (NYSE: WMT) was among the top beneficiaries of the virus-driven shopping boom the retail sector witnessed last year. While the factors that contributed to its impressive financial performance remain broadly unchanged, the department store chain has embarked on an initiative to convert the recent gains into long-term growth and profitability.

Walmart’s stock suffered one of the biggest intra-day losses last week after its relatively unimpressive fourth-quarter report and weak outlook spurred a sell-off. Interestingly, the retreat from the record highs has made it more attractive, from an investment perspective. Having weathered the virus crisis successfully so far, the retail giant looks poised to expand its market value further this year. According to analysts following the stock, the pull-back is temporary, while the company sees a slowdown in 2021. Walmart, an all-time favorite of investors, is a strong buy currently.

Riding on the tailwinds that supported last year’s performance, the management has shifted focus to investing in the future of the business. Under its new growth strategy, the company plans to spend about $14 billion this year in different areas of the business, ranging from exploring more revenue streams to offering new financial services.

Naturally, a major portion of the investments will go into the company’s fast-growing e-commerce platform. The aggressive online push that started much before the crisis — focused on curbside pickup and quick delivery — came as a boon when the shelter-in-place orders came into effect. While continuing with the efforts to build an ecosystem of synergistic assets, efforts are on to reduce exposure to international markets where performance is not up to the mark and expand in the more rewarding regions like Mexico and India. 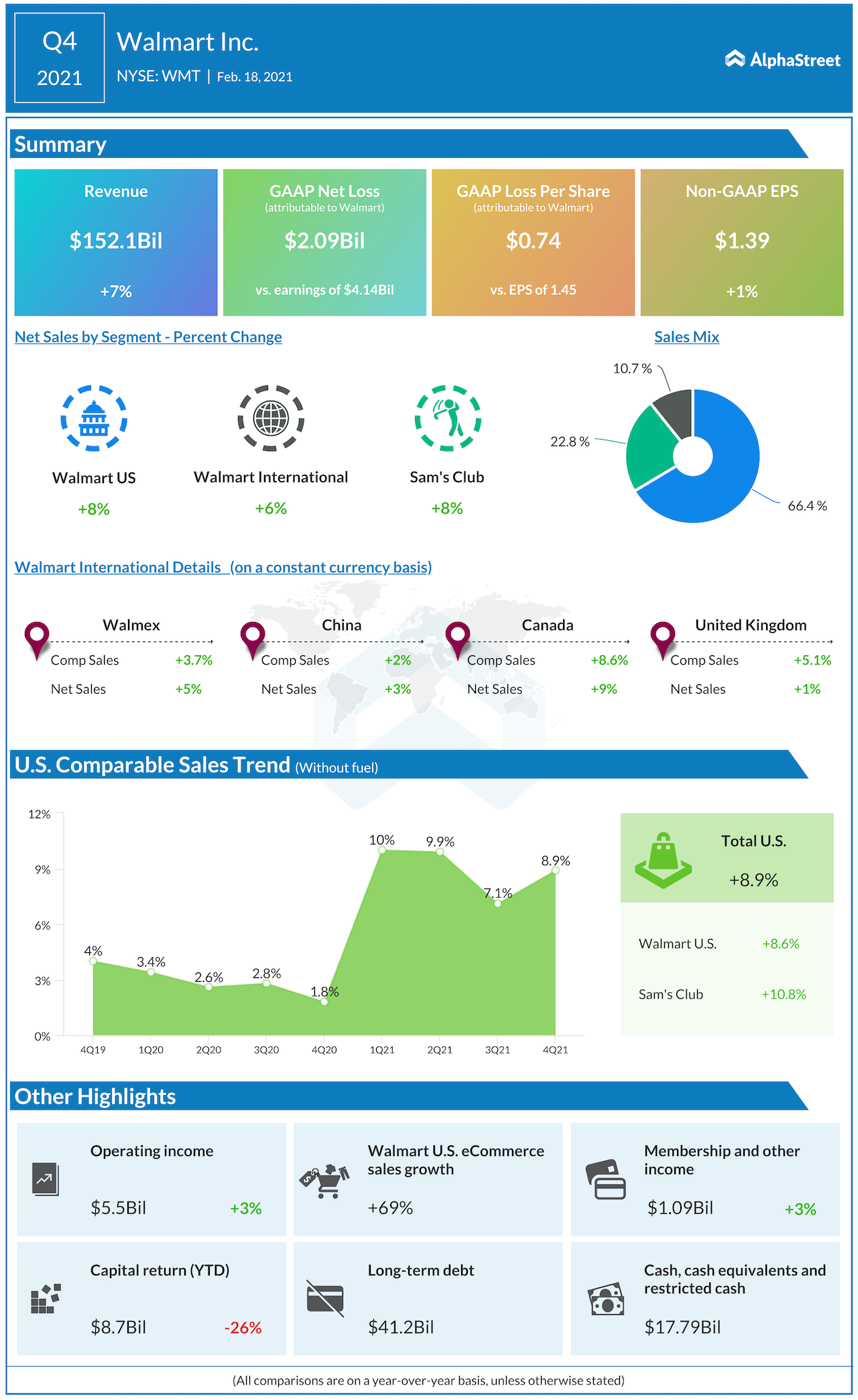 “We’re starting to drive the top and bottom line in more expensive ways. Our bottom line is becoming more diversified, which will enable us more operating income growth over time. We’re repositioning to be in different businesses and exiting some geographies so resources are shifted to our priorities. We’re building a better model, and it’s uniquely Walmart,” said Doug McMillon, chief executive officer of Walmart.

It is estimated that sales would moderate this year, dragging down the bottom-line that is expected to remain flat. Spiraling costs, including those related to the pandemic, will be the main drag on Walmart’s financial performance, partly offsetting gains from the strong sales. The overall weakness in key international markets resulted in the company incurring a loss of $0.74 per share in the fourth quarter, on a reported basis.

We expect continued strong growth in the U.S. businesses and expect even higher international growth rates as we focus on key markets and making money in new ways. We’ll continue improving margin mix through an enhanced general merchandise offering, new brands and marketplace growth with a greater push towards expanding fulfillment and other services for sellers. We’ll drive existing and new customer growth through initiatives like Walmart+.

In the final months of 2020, adjusted earnings edged up 1% annually to $1.39 per share but fell short of expectations, after beating estimates in the previous three quarters. In the US, the largest market for the big-box retailer, e-commerce sales surged 69% to a record high, partly supported by the government’s stimulus package. Comparable store sales were up 8.6% in the local market.

Walmart’s stock dropped about 6% since last week’s earnings release, continuing its pull-back from the record highs seen a few months ago. After experiencing several ups and downs since starting the year flat, the shares traded lower early Monday.