Wells Fargo & Company (NYSE: WFC) reported higher earnings for the first quarter of 2019 supported by a strong performance by the consumer banking division. The results topped the market expectations and shares of the financial services firm rose about 2% in the premarket session Friday, soon after the announcement. 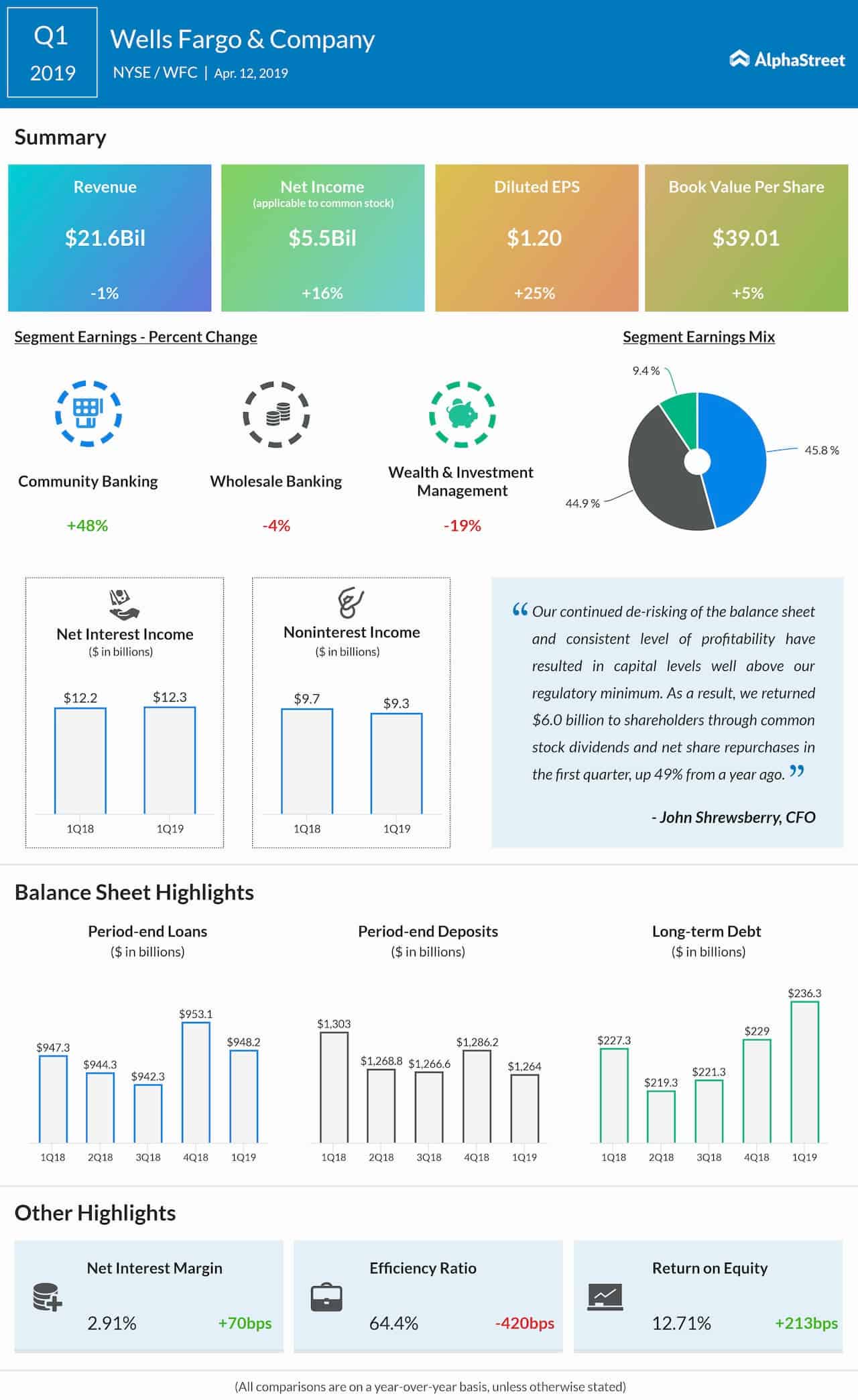 The bank posted net income of $5.9 billion or $1.20 per share for the March quarter, higher than $5.1 billion or $0.96 per share in the same period of 2018. A 48% growth in income from the Community Banking segment more than offset a 4% decrease in Wholesale Banking and a 19% fall in Wealth & Investment Management income.

Revenues, meanwhile, dropped 1.4% year-over-year to $21.6 billion during the three-month period. The results, however, beat the estimates. Net interest income edged up 1% annually to $12.3 billion, while there was a 5% growth in book value per share to $39.01.

Allen Parker, interim chief executive officer of Wells Fargo, said, “Since assuming this role, I have been focused on leading our Company forward by emphasizing my top priorities: serving our customers and supporting our Wells Fargo team members; meeting and exceeding the expectations of our regulators; and continuing the important transformation of the Company.”

Revenues dropped 1.4% year-over-year during the quarter but beat the estimates, while net interest income edged up 1%  to $12.3 billion

The San Francisco, California-based investment bank returned 50% more capital to shareholders, compared to the year-ago period. It repurchased shares worth $3.9 billion – representing an 86% increase – and raised the dividend by two cents from the preceding quarter to $0.45 per share.

In the fourth quarter of 2018, revenues dropped 5% to $21 billion, hurt mainly by the dismal performance by the Community Banking segment and there was a corresponding drop in net profit.

Of late, Wells Fargo has been mired in multiple scandals, including allegations of unfair business practices that led to the abrupt exit of CEO Tim Sloan last month, after a two-year stint. Sloan had also faced criticism for his failure to implement the transformation initiatives effectively. At the post-earnings conference call today, the market will be looking for updates from the management on the revival program.

Earlier this week, the bank announced the sale of its retirement division to Principal Financial Group (PFG) for $1.2 billion. The business has $827 billion in assets under management, and the deal is expected to close in the third quarter.

JP Morgan Chase (NYSE: JPM) Friday posted a 12% increase in first-quarter earnings to $2.65 per share as a double-digit growth in community banking pushed up revenues by 4%.

Wells Fargo’s stock moved up nearly 1% in the pre-market trading Friday, after closing Thursday’s session lower. Over the past twelve months, the shares dropped 6% and are trading close to the levels seen at the beginning of the year.