Why Costco’s (COST) growth prospects might depend on beating costs, digital lag

The company is planning to open 13 new locations in the U.S and international markets by the end of 2021

Though the retail boom triggered by the pandemic was estimated to be short-lived initially, the shopping spree continued as customers stocked up on essential items, concerned about the persistent market uncertainty. Costco Wholesale Corporation (NASDAQ: COST) navigated through the crisis effortlessly, supported by its successful business model and strong infrastructure. But the mass shift to digital shopping calls for urgent steps to ramp up the company’s omnichannel capabilities.

Total transactions at the Issaquah, Washington-based warehouse giant grew sharply in the latter part of the first half, with the main growth driver being fresh foods. Like most American store operators, Costco witnessed a spike in e-commerce sales since the onset of the virus outbreak – up 76% in the most recent quarter.

“The particular strength in fresh foods for the last several quarters on a year-over-year basis has been – the strong fresh has led to higher labor productivity, which is part of the cost component of that, if you will, manufacturing businesses as well as lower spoilage or what we call damage and destroyed. In many cases, given the strength, you’re not throwing away as much stuff at the end of the day or week and you’re again being much more productive from a labor efficiency standpoint. At some point that will subside is my guess.”

Costco’s margins remain under pressure from costs related to COVID-19, in the form of incremental employee compensation in manufacturing, production, and fulfillment. While wages are seen growing about 6% internationally, the ongoing cost-cutting measures would bring in a marked improvement compared to last year. In the past twelve months, the company incurred about $1.60 billion in pre-tax expenses related to the pandemic. 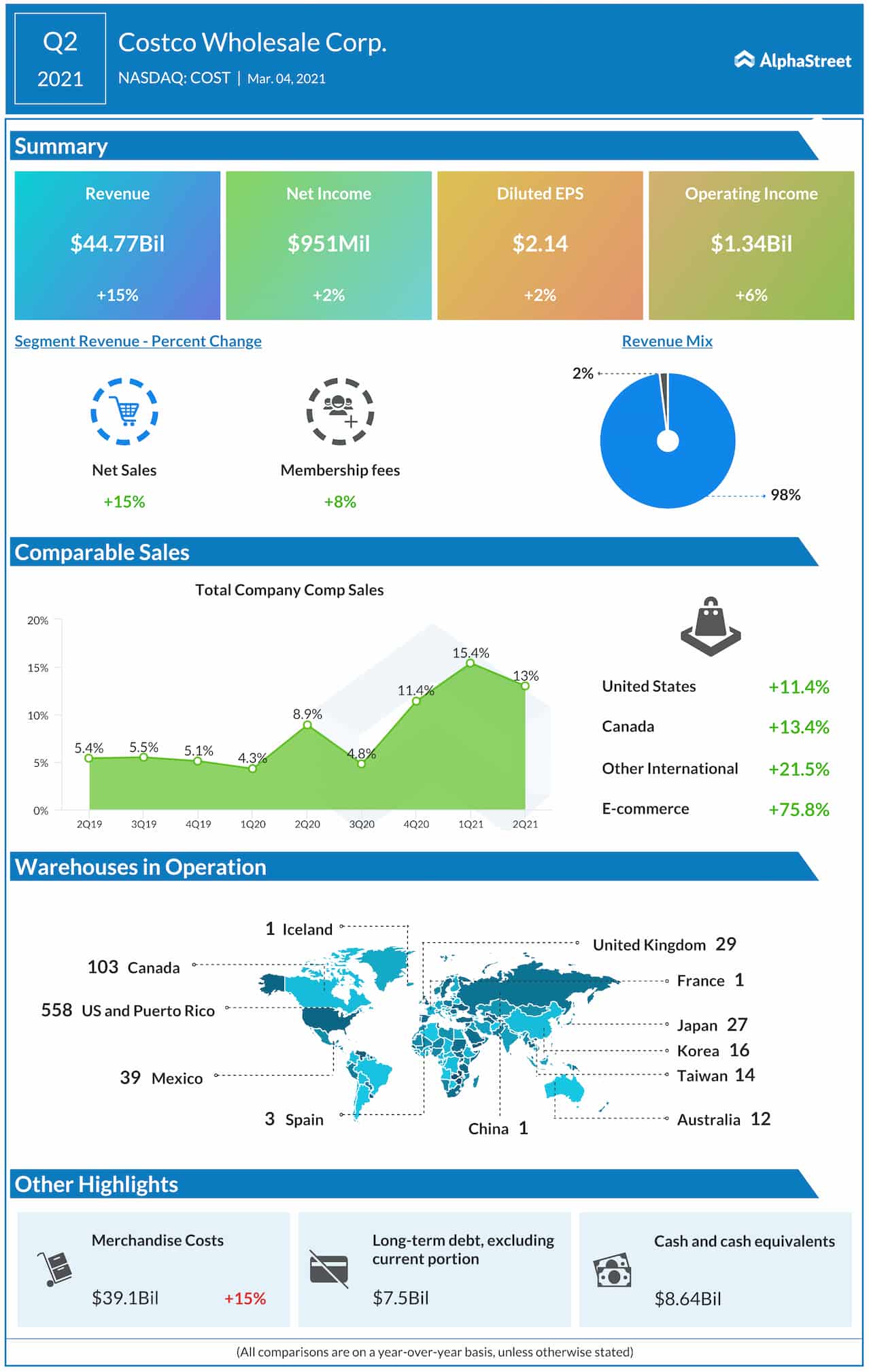 The logistics unit, which the company acquired a year ago, is playing a key role in easing supply-chain issues and enhancing last-mile capabilities. That helped maintain balanced inventory when faced with outsized demand for certain items, though certain non-food categories like electronics, home improvement, and bikes witnessed supply issues.

The company is on track to open 13 new locations before year-end, in the U.S and overseas, in a sign that operations are gradually returning to the pre-COVID levels. It is estimated that the related investments would lift full-year capital expenditure to above $3 billion.

Unlike most of its peers, Costco has been slow in implementing omnichannel capabilities like curbside pickup and fulfillment facilities. Considering people’s changed shopping behavior, the company might need to adapt to the new normal and invest heavily in its digital capabilities.

The market was disappointed this week after the company posted second-quarter profit that grew at a slower-than-expected rate. Earnings moved up 2% annually to $2.14 per share, reflecting a 15% growth in sales to $43.9 billion. The top-line was slightly above analysts’ consensus estimates. Sales grew in double digits across all geographical regions. At 13%, comparable-store sales advanced at a slower pace than in the previous quarter.

After hitting an all-time high in the final weeks of last year — thanks to the upbeat sentiment — Costco’s stock entered a downward spiral and lost about 19% since then. While experts are a bit cautious in their outlook, the recent dip in valuation can be seen as an opportunity to invest in the stock, which is an all-time favorite of investors. At 315.6, the shares traded down 2% on Friday afternoon.