Why is Nvidia a better investment than Intel in a virus-hit market?

Nvidia was relatively more successful last year in terms of profitability and creating shareholder value, despite being a smaller player

Chipmakers are currently struggling to meet the unprecedented demand growth, due to the mass adoption of digital services after the virus outbreak. In the changed scenario, market leaders Nvidia Corp. (NASDAQ: NVDA) and Intel Corp. (NASDAQ: INTC) are busy revisiting their business strategies, often with the aim of outsmarting each other.

Of late, Nvidia has been making inroads into the data-center space where Intel enjoys a strong foothold, with last year’s Mellanox giving the server portfolio a fresh boost, while the latter is expanding its GPU prowess to challenge Nvidia in its home turf. Under the revised model, Intel rolled out its first server GPU last year. Considering the companies’ growing interest in the self-driving market, there will be stiff competition to grab that market going forward.

Thriving on the power of its GPU portfolio, Nvidia ended fiscal 2021 with another round of record revenues and earnings. At $5 billion, fourth-quarter revenues were up 61%, which pushed up the bottom-line by 64% to $3.10 per share. Obviously, the results surpassed the market’s projection, as they did in every quarter for more than a decade. The management exuded confidence that the current momentum would be maintained in the current quarter. 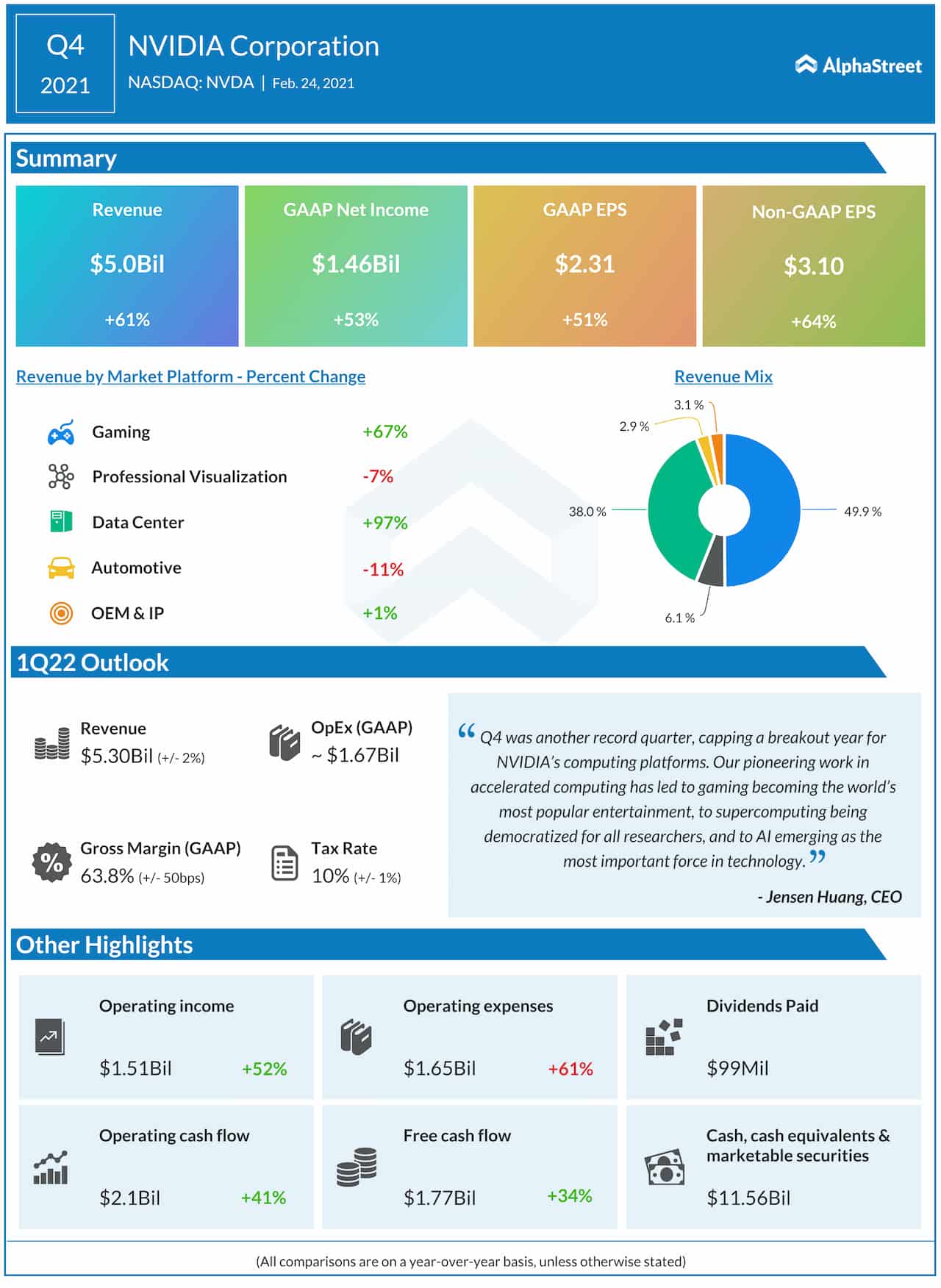 “Over the past year, it has become clear that we’ve entered a new era in which gaming is an integral part of global culture. The number of concurrent users on Steam has more than doubled since 2018 and continues to hit new records. In 2020 alone, more than 100 billion hours of gaming content was seen on YouTube and 0.5 billion people watched eSports. Increasingly, we aren’t just gaming, we’re also watching sports, kept attending concerts, creating content, and connecting with our friends in virtual environments.”

After growing many-fold in the last few years, Nvidia’s shares are relatively more expensive. Though the stock retreated from last month’s peak, it has the potential to bounce back and reach fresh highs. Experts’ advice is to invest in Nvidia right now and take advantage of the low stock price. The consensus rating on the stock is strong buy. This year alone, the value more than doubled.

It has been around five years since Intel’s quarterly earnings last missed analysts’ forecast. Though the key metrics beat in the fourth quarter, they were almost flat year-over-year. A deeper look into the report shows the core client computing business did well but the other segments registered negative growth. As a result, revenues edged down 1% to $20 billion and earnings stayed unchanged at $1.52 per share. Worse, Intel executives see continued weakness in the early months of the current fiscal year.

The muted outlook aligns with analysts’ view on INTC, which is expected to pare a part of the recent gains this year. That makes it a risky investment right now. So, it is important to wait until a clearer picture emerges, before buying or selling the stock. One should not be surprised if the stock pulls back and slips below the $65-mark in the coming weeks. Probably, the stock’s only attraction is affordability. 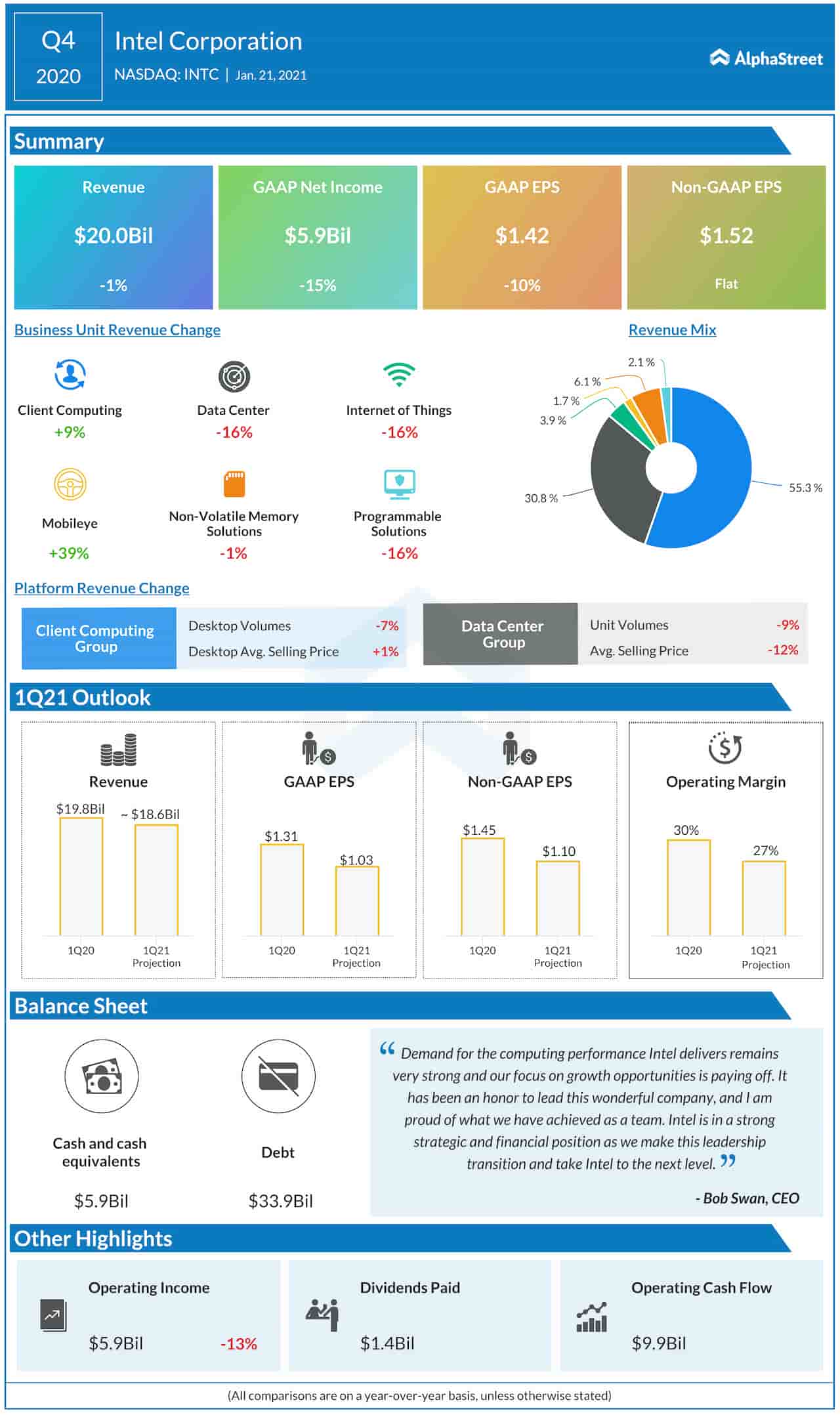 Despite being a smaller player than Intel, Nvidia was more successful last year both in terms of profitability and creating shareholder value. Meanwhile, the company’s efforts to expand into the smartphone CPU market through a $40-billion acquisition of UK-based Arm Holdings was put under a review by the regulators to investigate whether the buyout would breach competition rules.

That said, Intel’s strong fundamentals and scale of operation, supported by continued innovation, give it an edge from the long-term perspective. Moreover, the company continues to dominate the data-center and personal computer markets.