In the second quarter, comparable store sales increased 5.2% but revenue growth slowed down due to divestitures

Latest data from the retail space indicates Americans are slowly returning to their pre-pandemic behavior, encouraged by the widespread vaccination drive and relaxation of restrictions. For Walmart Inc. (NYSE: WMT), which reported impressive second-quarter results this week, the major revenue drivers were back-to-school spending and grocery sales. The current trend shows that in-store shopping has not lost its charm, despite the mass shift to online marketplaces.

It has been a roller-coaster ride for Walmart’s stock so far this week. It lost traction after every rebound since the pre-earnings rally that pushed up the price close to last year’s record high. The current volatility is probably short-lived since it is estimated that the shares are set to cross the $170-mark. After the recent dip, they look fairly priced. That makes WMT an attractive pick, as always.

The steady expansion of the grocery segment and a strong start to the back-to-school season, thanks to market reopening, contributed to top-line growth in the July quarter – comparable store sales increased 5.2% — while revenue growth was restricted to slightly above 2% due to divestitures. The resultant fall in international sales was more than offset by positive US sales, and revenues moved up to $141 billion. At $1.78, adjusted earnings per share were up 14% year-over-year and above the market’s projection.

Walmart expects a further uptick in online sales in the coming months — though there was a slowdown in the second quarter — and to emerge as a leading omnichannel player. Buoyed by the positive momentum, the management revised up its full-year earnings and revenue guidance. As far as future growth is concerned, another promising area is the company’s rapidly growing advertising business.  The retail behemoth continues to dominate the industry supported by its ever-growing portfolio and expansive store network. 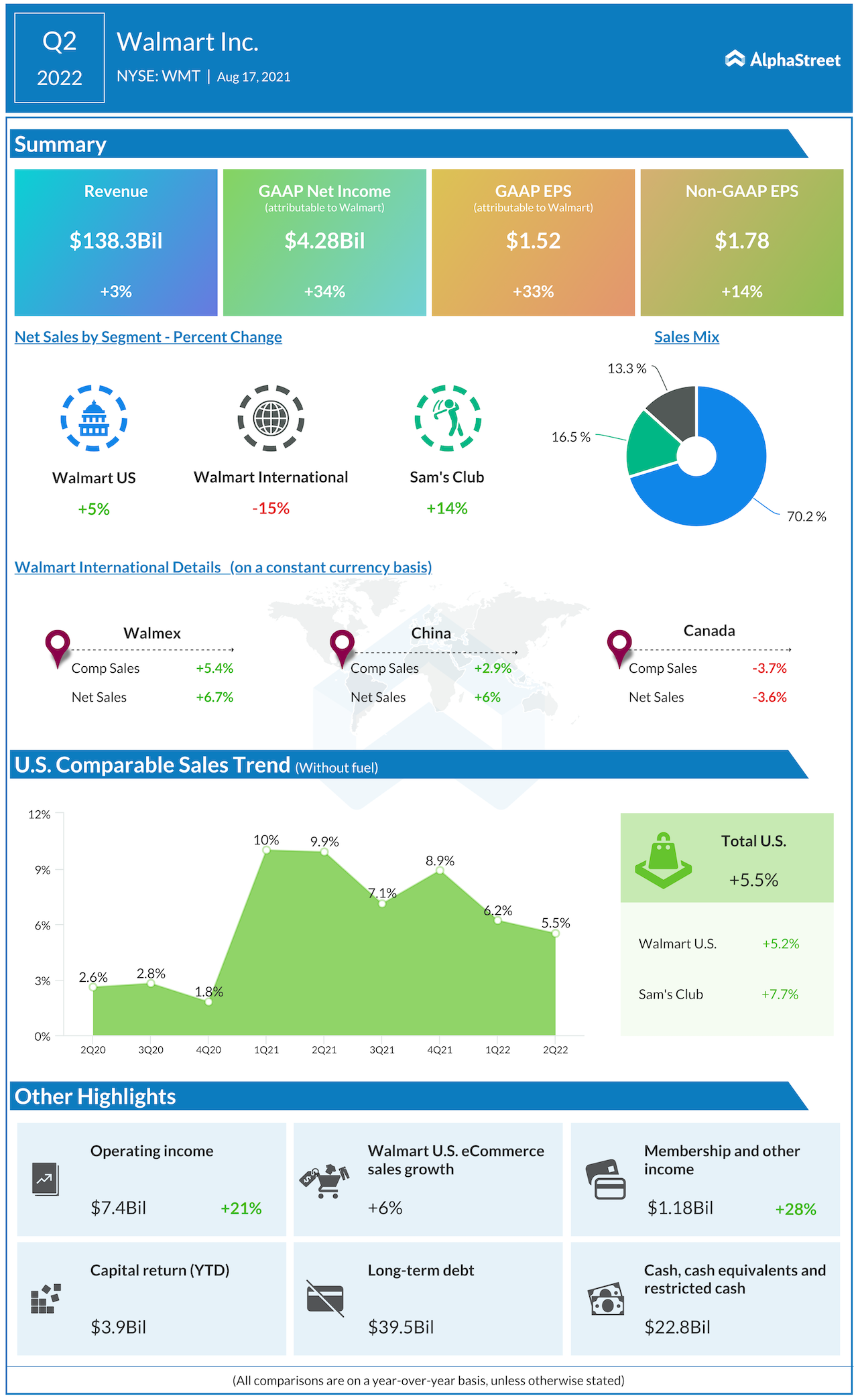 Recent quarters have demonstrated more than ever that our omnichannel strategy is the right one as we serve customers regardless of how they want to shop. There are occasions when people want to visit a store, times when they want to pick up and times when they want to have it delivered. We’re going to keep innovating and executing to get better at all three as our diversified omni model positions us well to gain share in high-growth markets around the world.

Walmart’s mammoth resources and financial strength helped it overcome inflation pressures and supply chain disruption in recent months, thanks to its seamless inventory and logistics management. The question is whether the retail giant would be able to continue the success story, in a market that is becoming increasingly competitive. Heavy capital spending and high costs associated with same-day offerings like curbside pickup might put pressure on profitability. Also, the current sales boom can ease as market conditions are influenced by the pandemic, especially in the wake of the emergence of the Delta variant.

On Wednesday, Walmart’s stock traded slightly above $150 but maintained the post-earnings downturn. Currently trading well above their long-term average, the shares are up 14% since last year.