Encouraged by the positive third-quarter outcome, the management raised its guidance for the full fiscal year

Walmart Inc. (NYSE: WMT) has been busy expanding its grocery business and improving customers’ retail experience lately, through initiatives like remodeling the stores and upgrading the merchandise mix. As it prepares for the holiday season, the main challenge facing the retail giant is the high inflation that remains a drag on consumer sentiment. Since there is a tendency among customers to cut back on discretionary spending, the management might consider offering discounts to boost sales.

The Bentonville-headquartered store chain’s performance in the early weeks of the second half was stronger than what was widely expected, mainly reflecting the high demand for its low-priced groceries at a time when customers are tightening their purse strings in response to the squeeze on spending power.

Walmart’s stock is yet to fully recover from the selloff triggered by its weak earnings report around six months ago — a few weeks after it climbed to an all-time high. However, it got a major boost early Tuesday after the company reported impressive third-quarter results. The valuation is still favorable from an investment perspective. That is just one of the many reasons to own the stock, which has long been a favorite among investors.

One of the highlights of the third quarter report is a notable improvement in inventory position, marked by a deceleration in inventory build-up. Comparable sales in the domestic market, excluding fuel, rose 8.2% and came in well above the market’s prediction. At Sam’s Club, which also registered stronger-than-expected comparable sales, the member count rose to an all-time high in Q3. 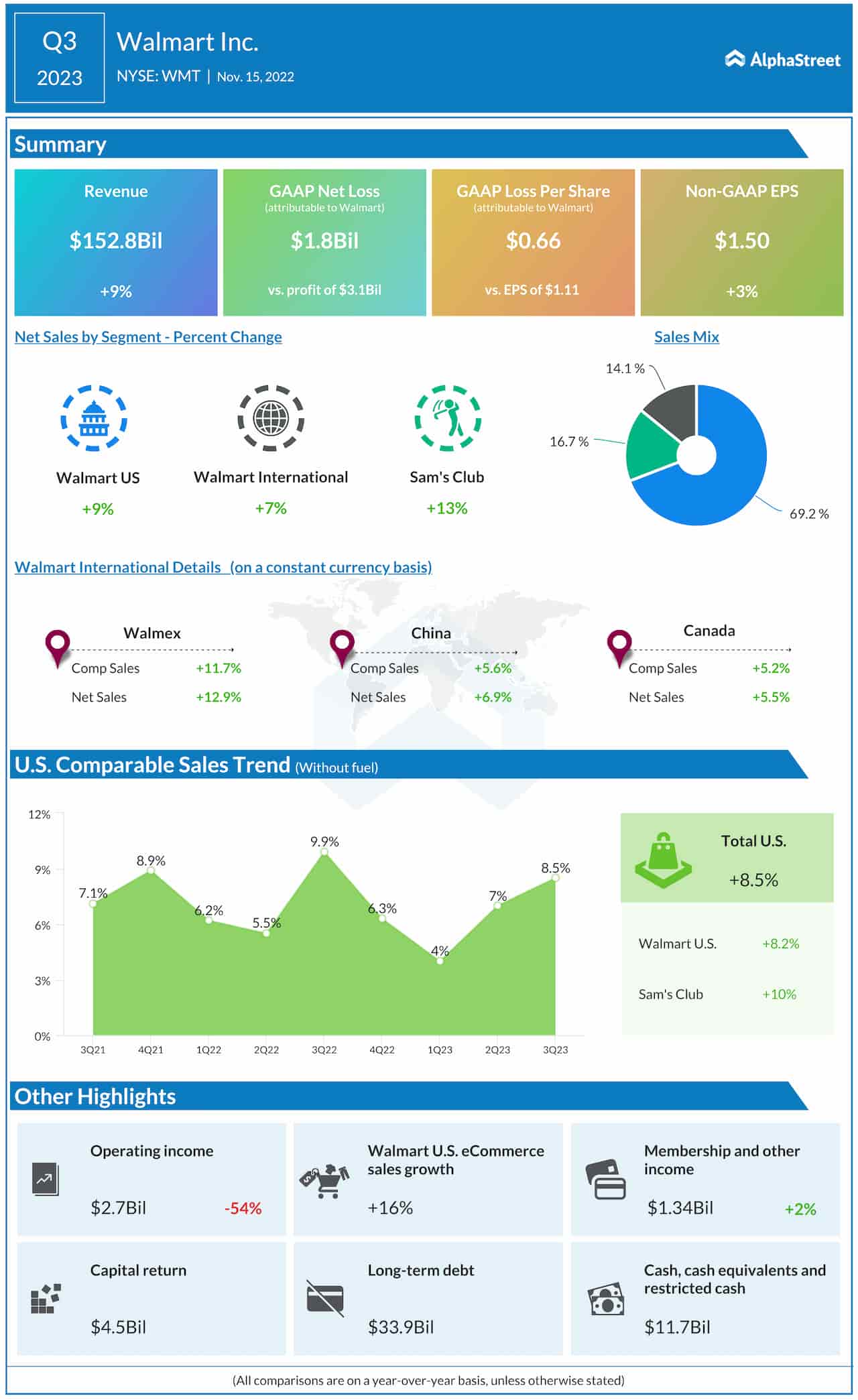 Walmart’s international business performed exceptionally well this time, with a 7% growth in sales despite the negative impact of unfavorable foreign exchange rates. Total revenues moved up 9% annually to $153 billion and topped expectations. US eCommerce sales were up 16%. Consequently, adjusted earnings rose 3% to $1.50 per share, exceeding the Street view. In the past decade, Walmart’s quarterly earnings mostly beat forecasts.

AMZN Earnings: All you need to know about Amazon’s Q3 2022 earnings results

“We significantly improved our inventory position in Q3, and we’ll continue to make progress as we end the year. From The Big Billion Days in India, through our Deals for Days events in the U.S. and a Thanksgiving meal that will cost the same as last year, we’re here to help make this an affordable and special time for families around the world. We have an amazing group of associates that make all this happen, and I want to say thank you,” said Doug McMillon, president and chief executive officer of Walmart.

Buoyed by the positive outcome, the management raised its full-year guidance. But the company is cautious in the outlook for the holiday season as it expects that inflationary pressures and continuing supply chain issues would weigh on sales in the final weeks of the year.

WMT traded up 7% on Tuesday afternoon. The stock is hovering slightly below the $150-mark, which broadly matches the value at which it entered the year.