Airline stocks set to soar into 2019

Airline stocks have remained mostly grounded this year, with the exception of United Airlines (UAL), which grew 46% year-to-date, defying the pricing pressures, higher labor costs, and fuel price inflation that have plagued its rivals.  United, the world’s third-largest airline by revenue, was primarily helped by market-beating results in all three quarters this year.

However, the story wasn’t so rosy for the others. So far this year, American Airlines (AAL) has plunged 32%, while JetBlue (JBLU) fell 19%. On the other hand, Delta Air Lines (DAL) has been mostly flattish. October marked the worst performance period for the industry this year due to mixed earnings results and broad-based geographic sell-off.

The industry fell as much as 14% during October, led by a 21% fall in Southwest Airlines (LUV), though there was not enough logical backing to LUV’s wide post-earnings dip. The company had reported reasonably fair results, but investors were apparently spooked by the management’s prediction that it expects modest inflation in costs other than fuel and profit-sharing expenses. 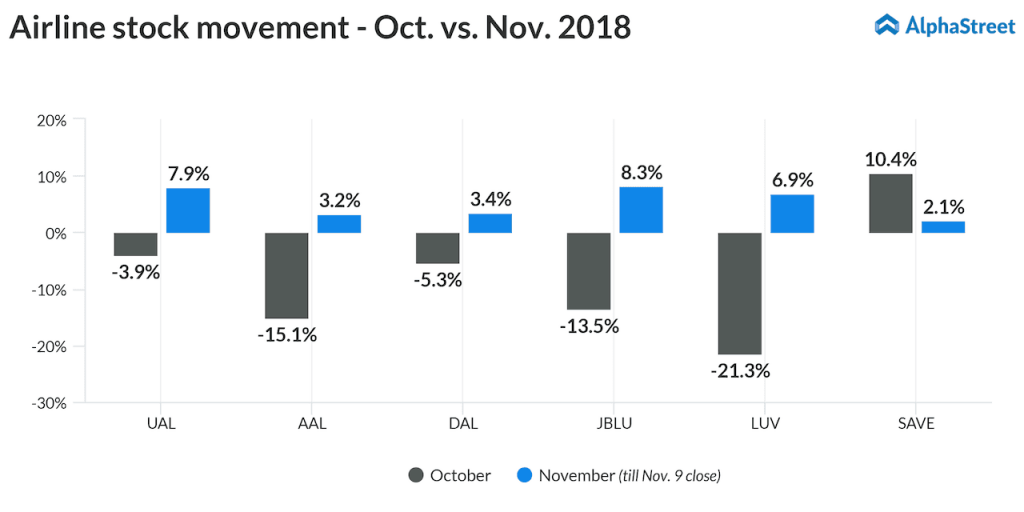 However, at least two analysts think the worst is over for the airline industry, which will soon soar into 2019. JPMorgan analyst Jamie Baker’s findings are backed by the optimism seen so far this month. All airline stocks have been on a recovery path this month, with Jetblue reporting the highest growth rate of 8.3%.

In a recent investor note, Baker said, the “case for industry margin expansion remains the best we’ve seen in four years.” Along with the investor note, the rating firm downgraded United Airlines, Spirit Airlines (SAVE) and Southwest Airline, but upgraded Jetblue.

Macquarie analyst Susan Donofrio is also bullish on the industry and predicts that margin expansion, higher travel demand, and capacity discipline would lift airline stocks going into next year.