Amarin Corp tops the market in Q1 on Vascepa strength

Amarin Corporation (NASDAQ: AMRN) on Wednesday said its revenues soared 67% to $73.3 million, riding on the strong demand for its Vascepa capsules as well as higher commercialization fees from its licensed partners. The top line surpassed Wall Street projection of $72.2 million.

According to Symphony Health, new prescriptions of Vascepa rose by about 80% in the first quarter of 2019, compared to the same period of the prior year. However, its net selling price declined modestly as an increased portion of prescriptions were derived from patients with lower net paying Medicare insurance coverage.

Licensing revenues, from the commercialization of Vascepa outside the US, were $0.5 million in Q1, compared to $0.1 million in the year-over period. 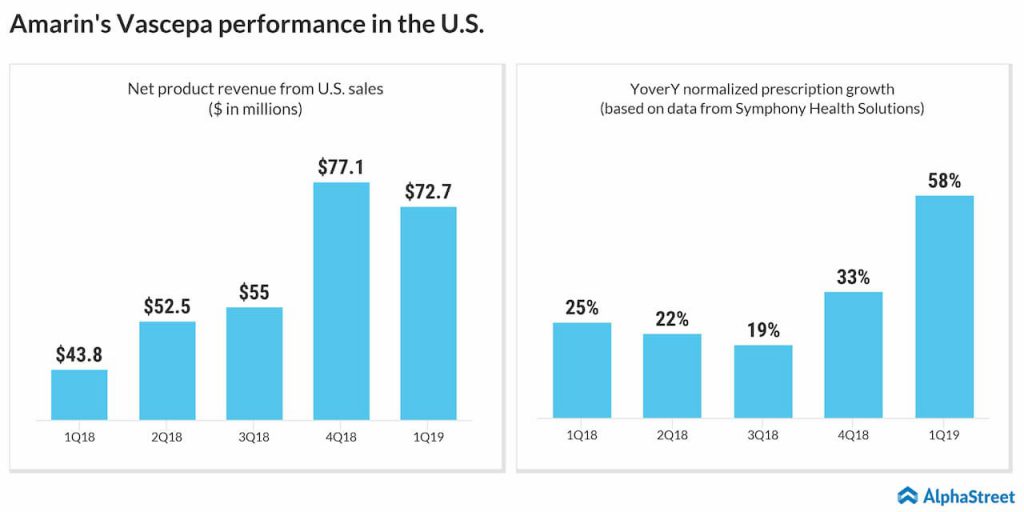 Amarin CEO John Thero said, “We remain very early in the process of introducing Vascepa to healthcare professionals and we remain limited in what we can say about Vascepa, particularly to consumers, until the label for Vascepa is expanded.”

Amarin shares have gained 46% since the beginning of this year, outperforming the industry, which has grown just over 2%. Three events had set the stage for the stock rally this year: Rumors that Novartis (NYSE: NVS) was interested in acquiring it; a better-than-expected revenue growth in Q4; and reports that the American Diabetes Association had given a positive note on its Vascepa capsule.

Amarin’s Vascepa capsules lower fat level in blood by reducing triglycerides in the body when taken along with a proper diet.