Deere & Company (DE) stays resilient to COVID. Is the stock a buy?

Though improvement in the COVID situation bodes well for the company, supply chain issues might weigh on performance in the near future

Deere & Company (NYSE: DE) has dominated the precision farming market for a long time, with the use of advanced technology giving it an advantage over competitors. The incorporation of digital technology at every level – from preparing the soil to harvesting – has made it a preferred brand among farmers.

After ending the first half of fiscal 2021 on an upbeat note, the company issued bullish full-year guidance, projecting a 90% growth in earnings. However, the market seems to have already priced those strengths into the stock, which has been on an upward spiral since last year.

DE looks overvalued and is probably headed for a correction in the near future, which calls for caution. Still, it will remain a favorite among long-term investors. Market watchers are optimistic in their views and recommend investing in the stock, which according to them would make strong gains in the long term.

There has been a marked improvement in agricultural activity across the country in recent months and that is having a positive effect on Deere’s order books, especially in the Construction & Forestry segment. Higher shipment volumes, favorable pricing, and improved sales mix in the core Production & Precision Agriculture segment contributed to the strong performance in the first half. The main challenge facing the Illinois-based farm equipment manufacturer is the continuing supply chain issues, though the COVID situation has improved after the vaccination campaign and relaxation of restrictions. 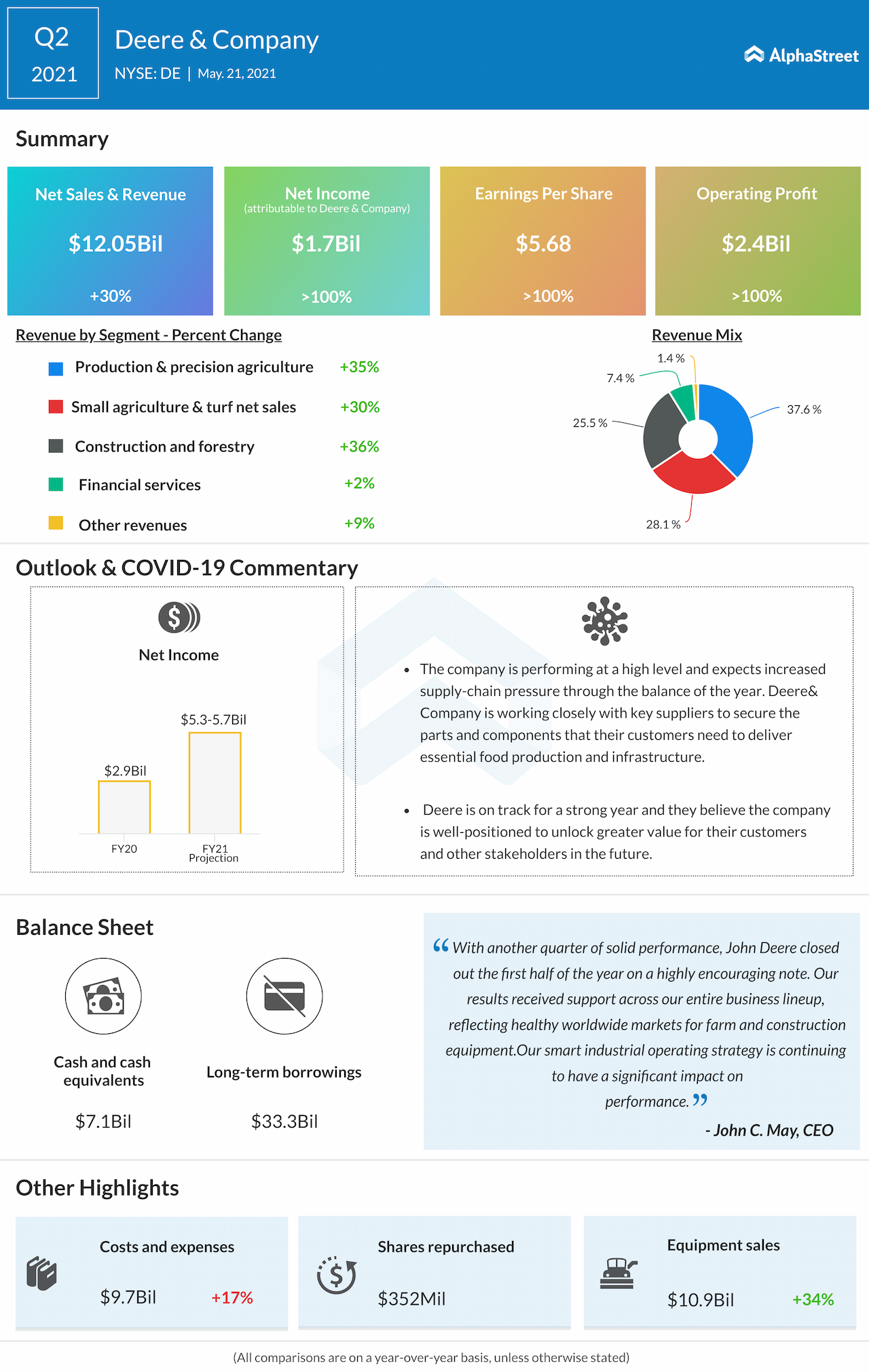 “The current market dynamics coupled with production constraints for the industry point to a multi-year cycle for ag equipment. Current global inventory levels for both new and used equipment remain at historic lows, while the average age of the North American fleet is at its highest level in two decades. Even with double-digit growth expected for the industry in ’21, shipments of North American large ag equipment remain 40% less on average than the previous cycle. At this point in 2021, it’s clear that demand will carry over into subsequent years, due partially to limitation on the industries production capabilities.”

Demand has remained largely unaffected by the COVID crisis, and the company’s profit and revenues exceeded estimates in the trailing four quarters. All the operating segments grew in the second quarter, sending revenues to a record high of $12 billion. Net income more than doubled to $5.68 per share, despite elevated costs slowing down margin growth.

Currently, DE is one of the fastest-growing Wall Street stocks, with the value growing more than 100% in the past twelve months and outperforming the market all along. It peaked early this month and traded close to the $400-mark, but pulled back later. The stock has gained about 40% in the trailing six months and is trading well above its 52-week average.