Earnings calendar for the week of March 29

Encouraging data from the labor market and optimism brought on by the stimulus package bolstered stock markets this week. Benchmark indexes Dow Jones Industrial Average and S&P 500 bounced back from the mid-week slump and settled close to last week’s record high, led by bank stocks even as inflation concerns eased.

This week, the market was abuzz with reports of Microsoft’s unconfirmed bid to take over instant messaging platform Discord in a $10-billion deal, enlivening the otherwise dull M&A space. Among the confirmed deals, the $7.2-billion merger between tech firm Synnex Corp. and Tech Data, currently owned by fund manager Apollo Global, elicited much interest among the stakeholders.

The other technology deals include the acquisition of India-based robotic process automation company Intellibot by ServiceNow and the buyout of Austin-based Hook Bang by gaming giant Take-Two Interactive.

After reporting double-digit earnings growth for the third quarter, consumer foods company General Mills early last week exuded confidence that the momentum would be maintained in the coming months. GameStop, which recently sent financial markets into a tizzy with unusually volatile stock movement, on Tuesday unveiled mixed results for the fourth quarter.

With the business world getting ready for the next earnings season, the only other major announcement was Adobe’s impressive first-quarter report.

Going forward, the spotlight will be on Walgreens Boots Alliance, the retail pharmacy giant that is scheduled to release the latest quarterly report on March 31. On the same day, chipmaker Micron Technology is expected to post second-quarter earnings.

Prior to that, the latest quarterly report of Lululemon Athletica is slated for release on March 30. The apparel retailer will be joined by online pet store Chewy on the same day. On April 1, Carmax will be publishing its year-end financial report. 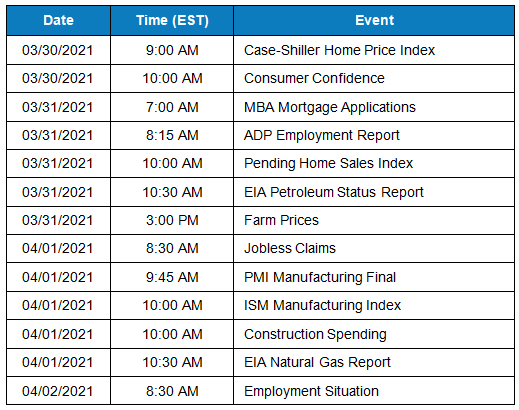