Shares of Alphabet (GOOGL) slipped 7% in the trailing 52 weeks as the tech sector as a whole went through a rough patch, thanks to data scandals, regulatory crackdowns, and socio-political tensions. However, when comparing with the industry’s decline of about 27% during the same period, Alphabet’s fall seems negligible.

The Google-parent is now scheduled to announce fourth-quarter results on Monday, February 4. Analysts project earnings of $11.2 per share on revenue of $31.28 billion.

During the last reported quarter, Alphabet topped market estimates on earnings but revenues came in a bit shy, causing the stock to drop over 4% during aftermarket hours. Total revenues grew 21% year-over-year to $33.7 billion but missed the estimate of $34.04 billion. 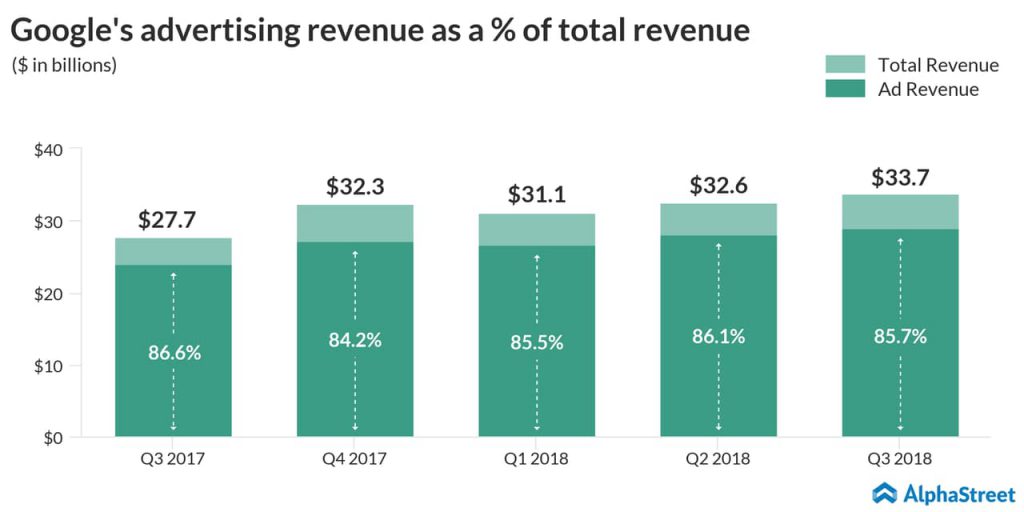 In the fourth quarter, the company is looking solid, especially in the backdrop of rival Facebook (FB) reporting strong advertising revenues. Facebook’s earnings announcement sent Alphabet shares up 1.6% on Wednesday.

Facebook retaining its share of ad revenues, in spite of the consecutive scandals, gave tech investors a much-needed respite. Alphabet’s ad revenues as a percent of total revenues have consistently been maintained in the 85-86% range. However, the company is looking at reducing its dependence on advertisements to boost top line by diversifying its operations into anything tech.

And it has been relatively successful in this mission, which is why we feel Alphabet would make a solid long-term investment, irrespective of how it performs this quarter or the next.

Alphabet’s massive cash coffers and technical expertise have already helped it gain a good headstart in artificial intelligence and machine learning, both of which have abundant long-term prospects. The cloud segment has also been steadily improving, though it continues to trail Microsoft (MSFT) and Amazon (AMZN). 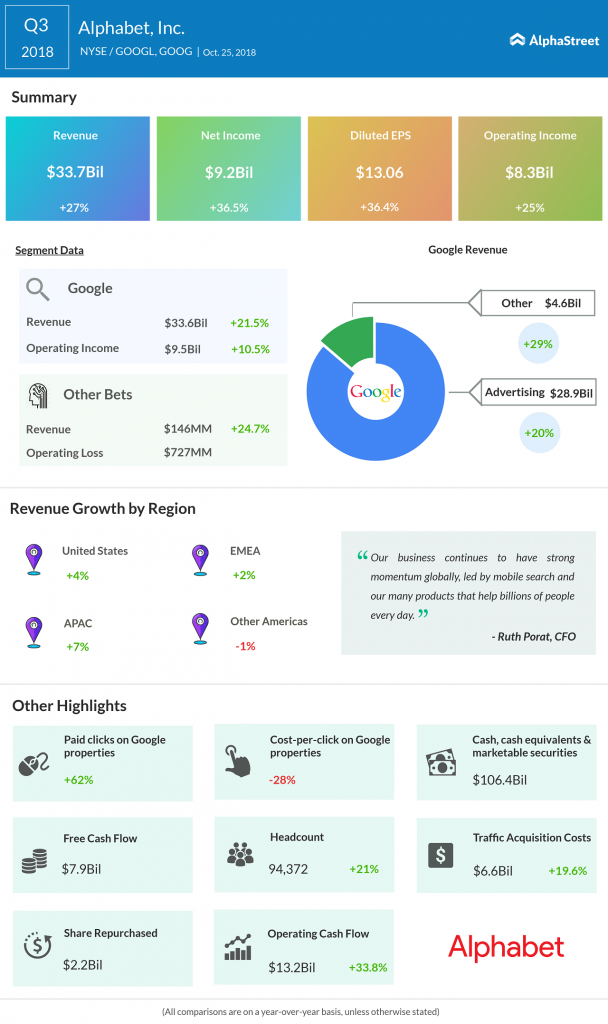 The company is making steady strides into the automobile and healthcare segments as well. While Waymo recently launched its first autonomous taxi in Arizona, Alphabet’s Verily received approval for its ECG in its Study Watch.

Google is also not letting Netflix (NFLX) and other video streamers go without any competition. The company has recently been spending more cash on original content.

Market observers expect Google’s non-advertising revenues to multiple in the coming quarters, thanks to these diversifications. As long as Alphabet can stay clear of regulatory watchdogs’ radar, it looks like an invincible investment.

DISCLAIMER: The article does not necessarily imply the views of AlphaStreet, and contains opinions of the author alone.