GrubHub Inc. (NYSE: GRUB) reported a 78% dip in earnings for the first quarter of 2019 due to higher costs and expenses as the food delivery giant is spending more on reach and marketing efforts for maintaining its market share in the space. However, the results exceeded analysts’ expectations. 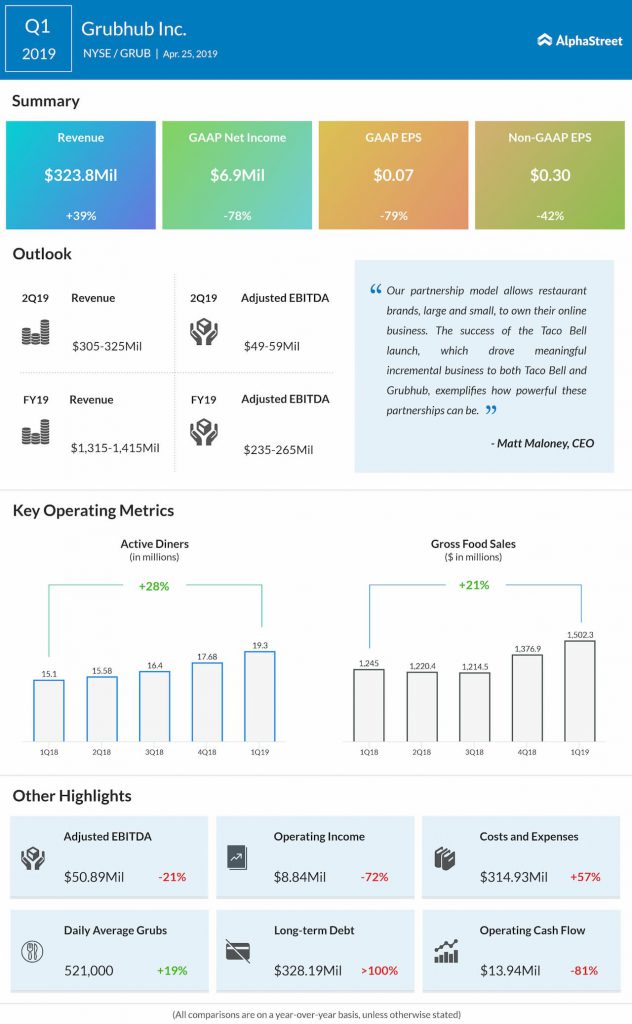 The company anticipates its typical seasonality in the second and third quarters and remained on track for both its top line and bottom line objectives for the full year 2019. The company believed that the dramatic increase in the scale and diversity of its diner base combined with the consistent diner value outlined in the supplemental disclosure sets GrubHub up for a great future.

The online delivery market is increasing around the globe due to the change in food habits and consumer preferences. Also, people started sticking to their home instead of a restaurant visit. This has created a tough competition prevailing in the delivery space.

Uber Eats (UBER), DoorDash, Postmates and Square’s (NYSE: SQ) Caviar remained the major delivery rivals for GrubHub. The company has resorted to the acquisition of firms like Tapingo, LevelUp, Seamless, Yelp’s Eat24 and many smaller firms in order to compete with the rivals.

Shares of GrubHub ended Thursday’s regular session up 0.79% at $69.78 on the NYSE. Following the earnings release, the stock inched up over 6% in the after-market session.

IPO News: What to know when Cadre Holdings goes public this week

The IPO market is having a remarkable year as several companies line up to go public. This week will see Cadre Holdings join the group. Here are a few things

The worst seems to be over for ExxonMobil (XOM). Is stock a buy?

With the relaxation of COVID restrictions being extended to more areas, energy demand is picking up as transportation services including air travel restart in many markets. In a sign that