Grubhub (NYSE: GRUB) stock price dropped over 7% before the bell as the second-quarter earnings failed to beat estimates. However, top-line came in ahead of expectations. The food-delivery platform also contracted the full-year revenue and adjusted EBITDA outlook reflecting the intense competition in the sector.

The stock price has remained muted throughout the year and has plunged about 60% from last September levels. It touched a new 52-week low of $60 in May 2019, but has recovered 31% in the past two months. The food-delivery platform has been facing intense competition from its rivals and has been on investment mode which has been dragging earnings.

Revenue increased 36% to $325 million compared to $318.7 million anticipated by the street. Adjusted earnings dwindled 46% to 27 cents per share, failing to meet estimates of 30 cents and adjusted EBITDA contracted 19% from the prior year period. It’s worth noting that second and third quarters are seasonally weak quarter for Grubhub. 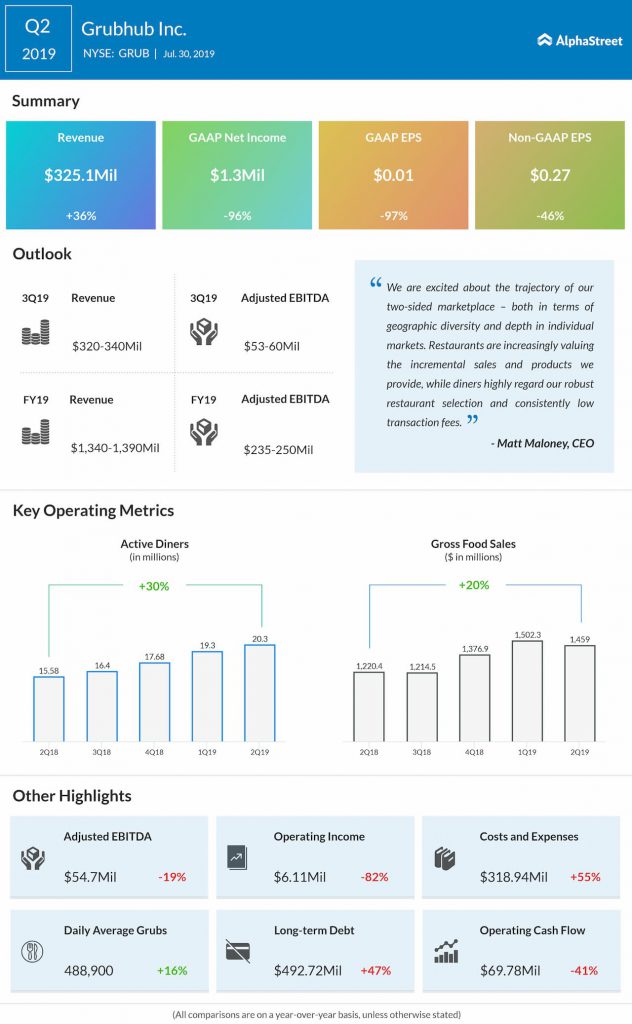 Operating expenses soared 55% primarily due to the ongoing investments in sales and marketing and technology which is expected to help in improving the brand presence and customer stickiness. The significant rise in expenses has been dragging earnings for Grubhub.

Gross food sales, which shows the total value of food ordered through the platform rose 20% to $1.5 billion. The average number of daily orders placed increased 16% and number of active diners who used the app also saw an improvement of 30%.

However, on a sequential basis, gross food sales and daily average grubs has decreased, which is a concern for investors.

For the third quarter, the company is projecting revenue to be between $320-340 million compared to $332 million estimated by the street.

When it comes to fiscal guidance, Grubhub has contracted the high-end guidance range provided last quarter. Sales is guided to come in the range of $1.34-1.39 billion compared to $1.37 billion expected by analysts.

According to market research firm eMarketer, usage of food delivery apps is going to increase 21% in 2019 touching 38 million. The research firm also added that the trend is about to grow further in 2020 reaching 44.1 million and surge to 59.5 million by 2023. 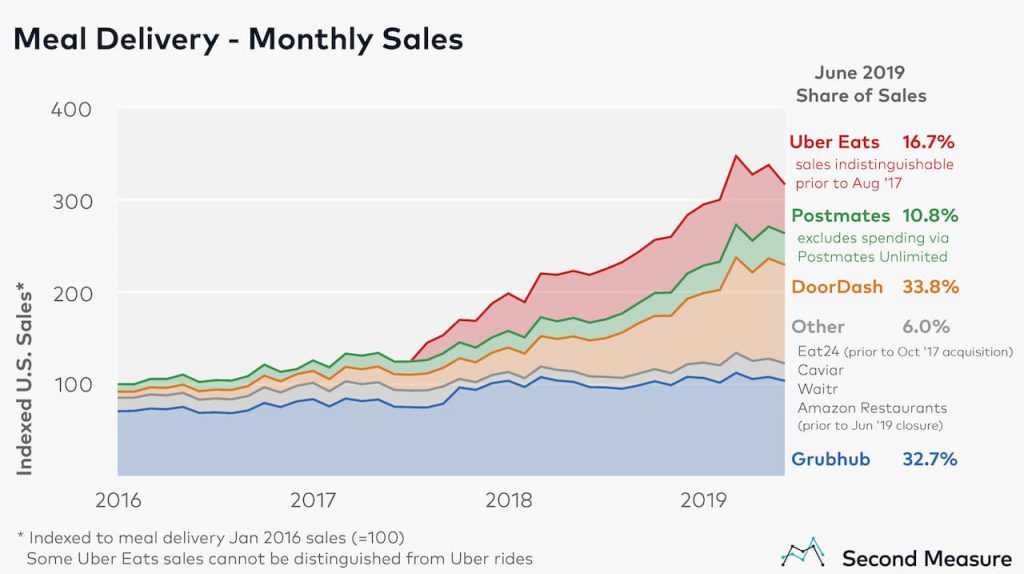 As per the Second Measure stats unveiled this month, Grubhub is facing intense competition from DoorDash, followed by Uber Eats (UBER) and Postmates.

The report also added that with customer loyalty coming down, it’s inevitable for food delivery platforms to have long-term partnerships with the likes of Starbucks, McDonald’s etc. with the national presence, which would bring sustainable revenues in the long term.

Grubhub has its task cut out to retain market share without losing the focus on profitability. With intense rivals who are well-funded and expected headwinds due to possible regulatory issues, the cost of acquisition is going to remain high in the near future.