Halliburton Company (NYSE:HAL) topped market expectations on revenue for the first quarter of 2019 while earnings came in line with estimates. Shares jumped 4.2% in premarket hours on Monday.

Total revenue of $5.7 billion was essentially flat year-over-year, but surpassed the estimate of $5.5 billion. 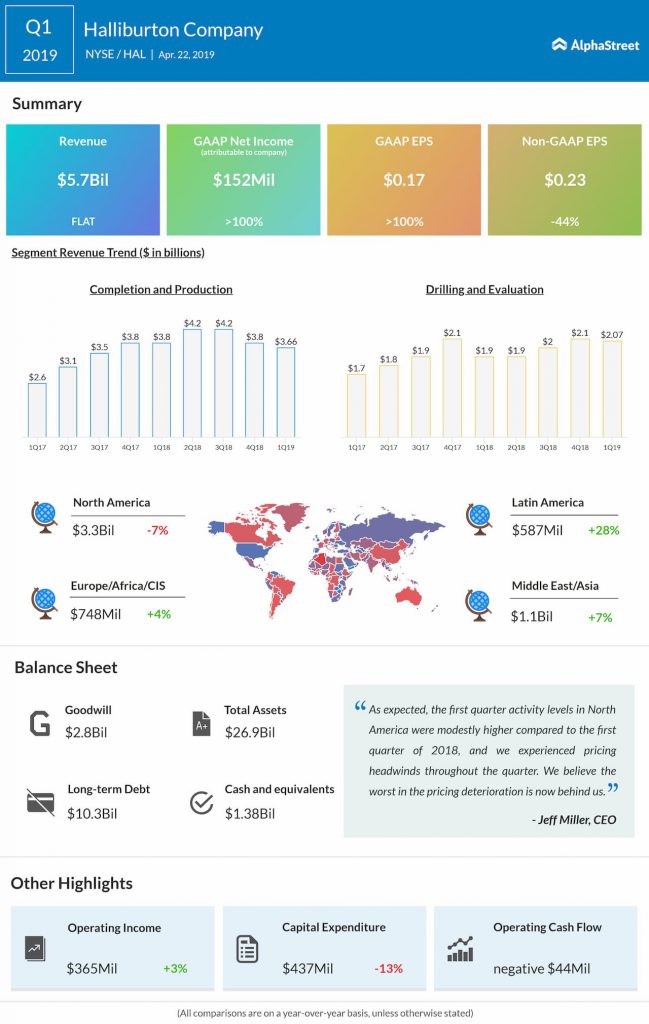 CEO Jeff Miller said, “As expected, the first quarter activity levels in North America were modestly higher compared to the first quarter of 2018, and we experienced pricing headwinds throughout the quarter. We believe the worst in the pricing deterioration is now behind us. For the next couple of quarters, I see demand for our services progressing modestly.”

During the quarter, Completion and Production revenue fell 4% year-over-year to $3.7 billion, mainly due to lower pricing for stimulation services in US land. Drilling and Evaluation revenue rose 7% year-over-year to $2.1 billion, with activity improvements across all geographic regions. The increase was helped by higher logging and project management activity globally and improved fluids activity in Latin America.

Within International, the highest revenue growth of 28% came from Latin America, fueled by higher activity for the majority of Halliburton’s product service lines in Mexico, higher stimulation activity in Argentina and improved fluids activity across the region.

Halliburton said it will build the first oilfield chemical manufacturing plant in Saudi Arabia. The plant is expected to be completed in 2020.