Amidst challenging market conditions, the second-largest oilfield service provider Halliburton (NYSE: HAL) is scheduled to report quarterly results on Monday, April 22, before the opening bell. Analysts expect to see a decline in both revenue and earnings. While earnings are anticipated to be 23 cents per share, revenue is expected to decline in the low-single-digit to $5.54 billion.

Though oil prices somewhat recovered in the first quarter, oilfield operators in North America continue to be reluctant on spending money on service providers. They are using up these amounts to improve investor returns as well as to focus on drilled but uncompleted wells.

Hence, the benefits of higher crude oil prices are not getting transferred to service providers like Halliburton. Since North America accounts for more than half of the company’s top line, the slowdown is likely to have a direct impact.

The company is also likely to be hurt by weakening activity in Canadian coasts, where the rig count has been cut to a third of what it was last year.

In the last reported quarter, the Houston, Texas-based firm surpassed market estimates on both revenue and earnings. Total company revenue of $5.94 billion stayed relatively unchanged from the same period last year. Adjusted income from continuing operations was $358 million or $0.41 per share. 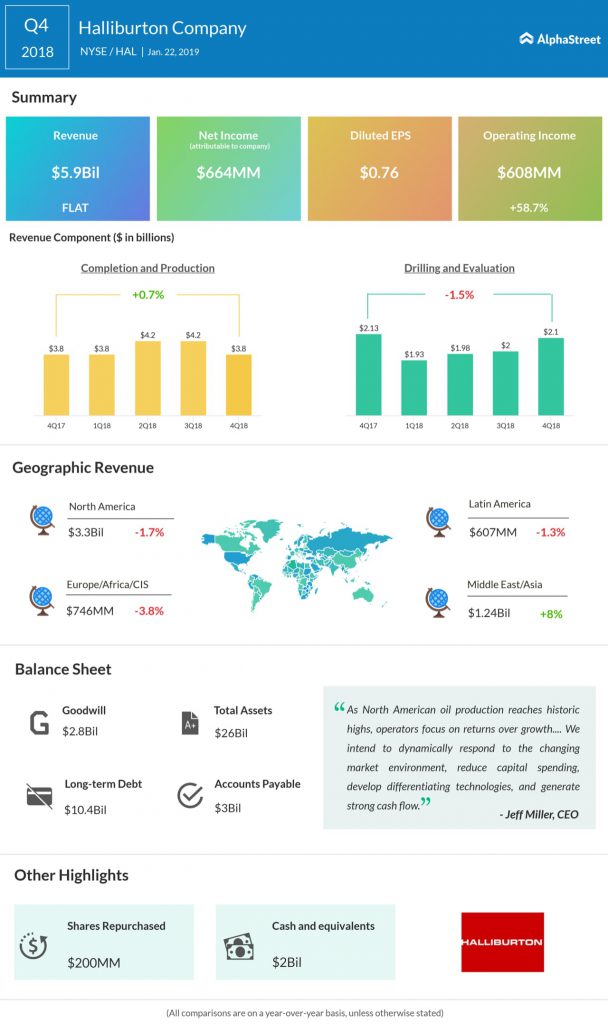 HAL shares have declined 37% in the trailing 52 weeks. It has somewhat rebounded since the beginning of this year, gaining 18%. The stock has a 12-month average price target of $39.89, suggesting a 24% upside from the last close.