Intuit (INTU): After strong season, what future holds for the tax software firm?

For the company, the third quarter is typically the busiest period of the year as it comes in the January-April tax season

Intuit, Inc. (NASDAQ: INTU) had a mixed tax season — its innovative self-filing and assisted services witnessed strong adoption but overall performance fell short of expectations. The continuing impact of the pandemic on small-scale businesses, which account for a major share of its revenues, could be a risk for the tax solutions provider going forward. But the nature of the business makes it recession-proof because tax-filing is a process that is required both during booms and busts.

The Palo Alto, California-based accounting software provider has expanded its client base consistently, benefiting from its competitive prices, but the virus-related headwinds could be a drag on future performance. The company’s stock, which rose to a record high this week — extending the recent uptrend — looks overvalued. The positive third-quarter performance failed to impress investors as the numbers missed estimates. Meanwhile, taking a cue from the company’s solid long-term prospects and strong balance sheet, analysts unanimously recommend buying the stock, which according to them has the potential to grow about 14% in the next twelve months.

The government’s extensive stimulus program is a bright spot for small-and-medium companies that bore the maximum brunt of the COVID crisis. Intuit’s TurboTax, a do-it-yourself platform that allows individuals to do tax filing on their own without assistance, has a large customer base and remains intact despite the challenging market conditions. The growing adoption of the self-filing service and the shift to subscription-based model might set a new trend for the business in the coming months.

The third fiscal quarter is typically the busiest period for Intuit as it comes in the January-April tax season, generating significant revenues compared to the other three quarters. Since the tax season started in February this year, instead of January due to technical reasons, a complete picture would emerge only when the company reports fourth-quarter results. Meanwhile, the management remains bullish on future performance and has raised the full-year guidance above the consensus estimate. 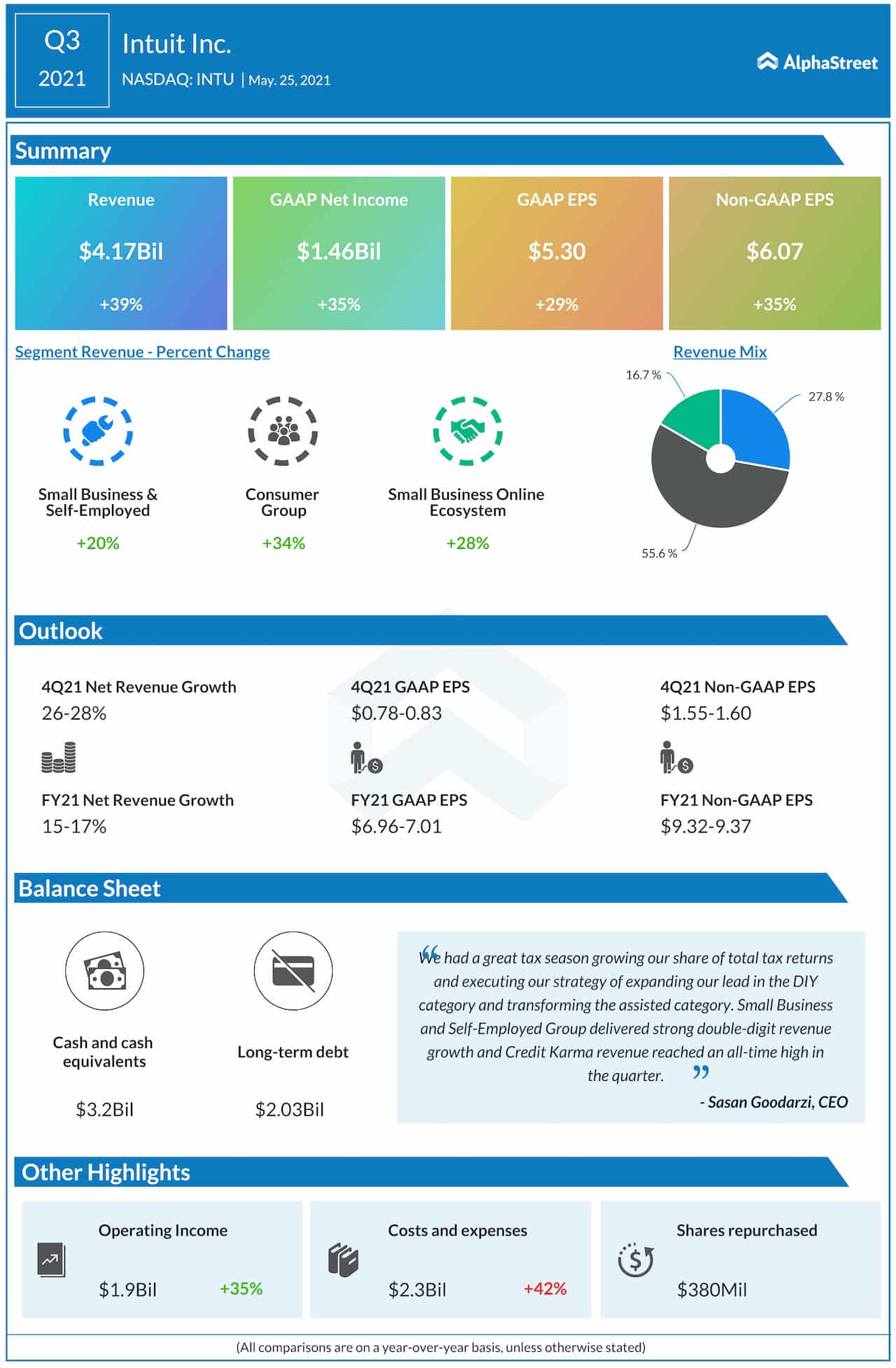 “We made significant progress this season. Within the do-it-yourself category, we continued to double down on underpenetrated segments, including LatinX, Self-Employed, and investors. We saw a significant acceleration in investor customer growth this season and expect it to more than triple over last year. We expect the base of customers paying us nothing to grow 6% this season. Within transforming the assisted category, we continue to make progress connecting people to experts with TurboTax Live.”

In the most recent quarter, adjusted earnings grew 35% to $6.07 per share on revenues of $4.17 billion, which was up 39% year-over-year. The positive outcome mainly reflects a double-digit growth in the core consumer group division, supported by strong performance by the other two segments. The numbers, meanwhile, came in below expectations, as they did in the previous quarter.

The company’s shares closed Wednesday’s regular session lower but stayed well above their 52-week average. For the stock, 2021 has been a volatile year so far though it grew 18% since the beginning of the year.