Shares of the pharma giant Merck (MRK) rose 2% before the market hours after the company surpassed estimates on the headline numbers. The company’s strong results were powered by its blockbuster drug KEYTRUDA which continued its momentum from the last quarter. Based on the strong Q1 results, Merck has raised its 2019 outlook for revenue and earnings.

Merck’s first-quarter sales grew 8% to $10.8 billion aided by solid sales growth of 55% from KEYTRUDA. The pharma giant also saw double-digit growth from GARDASIL, VARIVAX, and BRIDION. The top line numbers came in better than $10.48 billion expected by the analysts. Adjusted earnings came in at $1.22 per share, compared to $1.05 per share expected by the street.

The pharma giant has raised its outlook for 2019 as it expects to continue the strong momentum from the first quarter. Merck now expects revenue to come in the range of $43.9 billion to $45.1 billion compared to earlier guidance of $43.2 billion to $44.7 billion. Adjusted earnings is projected to grow 8%-10% in the range of $4.67 to $4.79 per share. 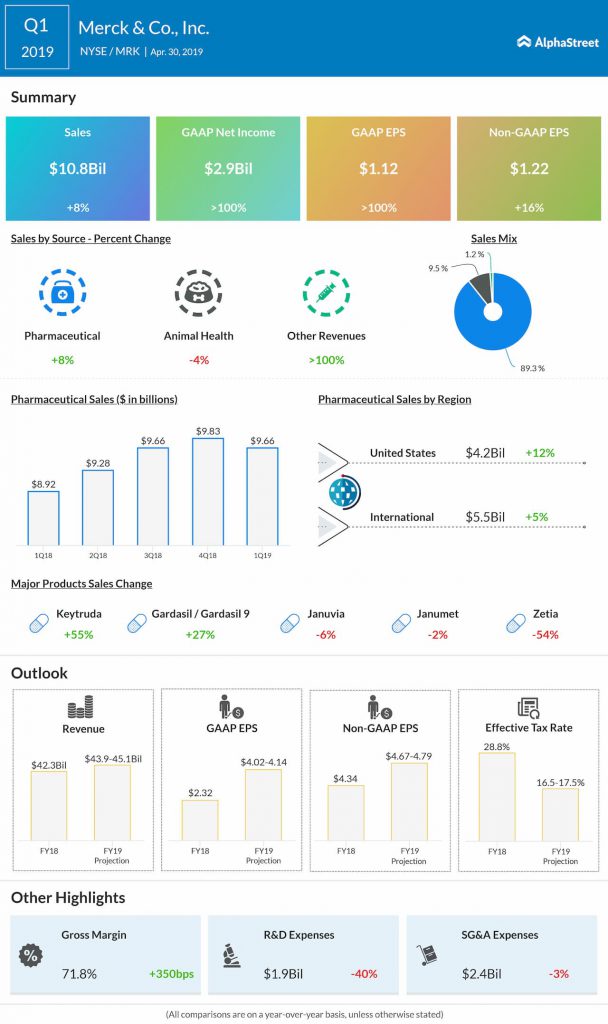 Commenting on the first quarter results, CEO Ken Frazier said, “Our strong start to 2019, with double-digit sales and EPS growth in the first quarter, demonstrates our execution across all aspects of our business and the strength of our key growth pillars, including oncology and vaccines.”

Merck also today unveiled a new restructuring program which would be completed by 2023. The company plans to incur charges in the range of $800 million to $1.2 billion relating to plant shutdowns and separation expenses. For 2019 period, GAAP expenses related to restructuring would be $500 million and it has recorded $187 million in the first quarter.

In the last 12 months, Merck’s share price has increased by 29%. As of now, the pharma firm’s growth is fueled by strong growth from its cancer drug KEYTRUDA. The company will continue to benefit from the blockbuster drug as it gets approval for treatment of more indications. Apart from the cancer drug, Gardasil vaccines are also witnessing strong growth which would be lifting the top line.

Strong growth from KEYTRUDA and Gardasil will be offset by other drugs which are going to see a decline in sales as they go off-patent losing market exclusivity. However, investors would not be worried much in the near future about the Merck’s growth as KEYTRUDA would continue to be a money spinner for nine years as the patent for the drug would expire in 2028.

The company has a good amount of time to find the next blockbuster which would continue to fuel Merck’s growth. With a healthy pipeline of drug candidates in the late-stage clinical trials, the pharma company is in a better position, for now, to look for its next blockbuster.