Moderna raises over $600-million through IPO, falls below IPO price

Biotech company Moderna raised above $600 million on Thursday by selling about 26 million of its common stock at $23 a share, thus bringing its market cap to about $7.5 billion and making it the biggest biotech IPO of 2018. Moderna debuted under the stock symbol “MRNA” on Nasdaq today and the stock fell about 4% when it opened. 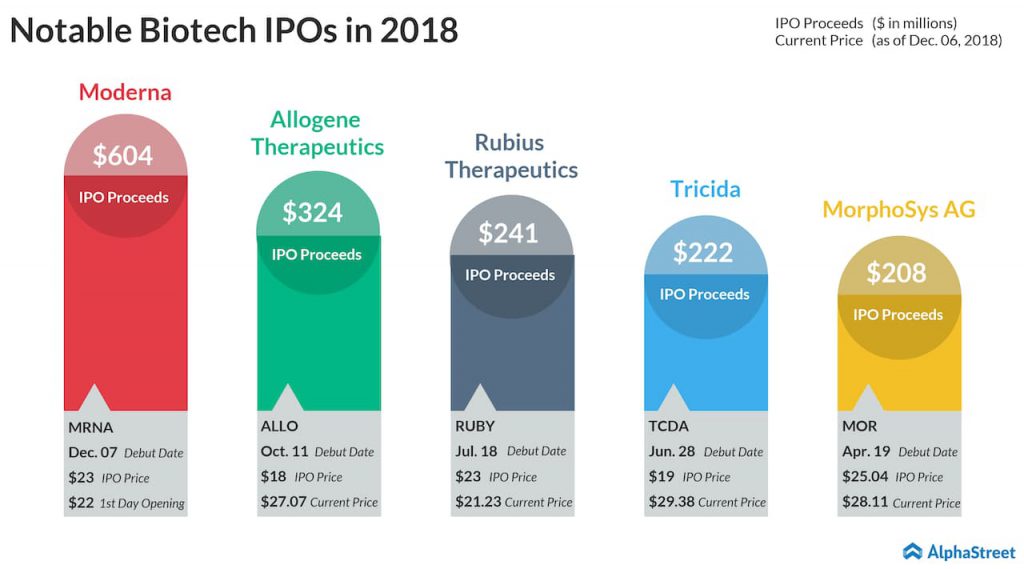 On November 9, 2018, the company had filed the prospectus with SEC for the initial public offering. On Tuesday, December 4, Moderna said that it would be selling 21.7 million shares of its common stock with an IPO price range of $22 to $24 per share.

The Massachusetts, Cambridge-based biotech firm intends to use the net proceeds from this offering to fund its drug discovery and clinical development, expand manufacturing platform and capabilities, and infrastructure to support pipeline; develop its Messenger RNA (mRNA) technology platform and create new modalities; for working capital and other general corporate purposes.

Moderna was founded in 2010 by Flagship Pioneering and is headed by CEO Stephane Bancel. Out of 21 development programs in the pipeline, 10 have entered clinical studies and 3 have open INDs. The company’s therapeutic and vaccine development programs span infectious diseases, oncology, cardiovascular diseases, and rare genetic diseases.

Moderna has approximately 700 employees and has established strategic alliances with leading biopharmaceutical companies, including AstraZeneca, Merck (MRK), and Vertex Pharmaceuticals (VRTX). As of September 30, 2018, Moderna has raised over $2.6 billion in total funding from the strategic collaborators and investors and has cash, cash equivalents, and investments of $1.2 billion.

Moderna had filed over 1,500 patent applications since 2010 (including pending and expired applications), and have over 100 issued or allowed U.S. and foreign patents. Through September 30, 2018, Moderna had incurred approximately $480 million of expenses to advance its platform technology and intellectual properties.

In a turbulent market scenario, all eyes will be watching today on how MRNA stock trades in its first day on Nasdaq. Moderna (MRNA) shares opened at $22 today, down $1 from its IPO price.