During the quarter, an 8% growth in Innovative Health top-line was partly offset by a 7% decline in its smaller Essential Health segment. 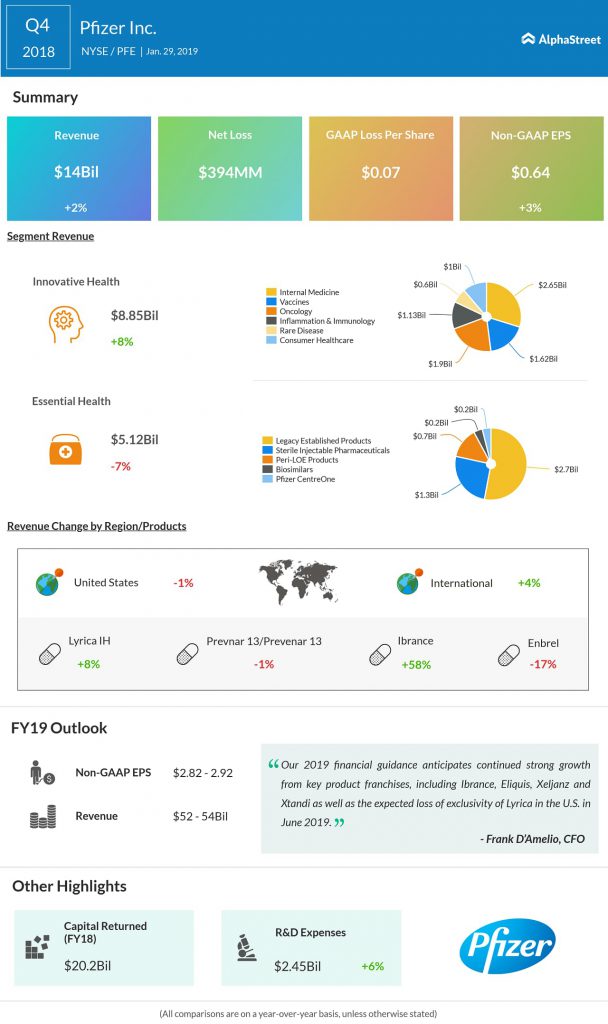 PFE shares were down 3% during pre-market trading on Tuesday as investors were not impressed by the outlook given by the company.

Shares of the pharmaceutical giant have been almost flat in the last 12 months. It closed its last trading session down 2.73% on Monday.

Albert Bourla, who took charge as the CEO on Jan 1, said, “2019 is expected to be a busy year with important clinical data readouts across our early-, mid- and late-stage pipeline. In the near term, we expect to report pivotal top-line results for tanezumab in chronic lower back pain as well as additional data in osteoarthritis following today’s announcement of a second positive Phase 3 trial.”

Last week, Pfizer was downgraded from Buy to Neutral by UBS analyst Navin Jacob who raised concerns about the company’s patent cliffs for many of its key products. In November, Pfizer lost a patent war in the UK for its drug Lyrica.

The biggest development during the quarter was the joint venture between Pfizer and GlaxoSmithKline plc (GSK) on their consumer health businesses. The transaction is expected to close in the second half of this year and the combined entity will be a giant in the consumer health sector. This will be a key point to watch out for during the results announcement.