If you ever miss the fair rides, you just take a look at the stock graph of Roku Inc. (ROKU) in 2018. With a plethora of ups and downs, the stock is finally up 12% on the year vs. S&P 500’s 2% hike. So, I guess it’s best to fasten your seatbelts when the Amazon Prime Video rival posts third-quarter earnings on November 7.

Analysts, however, estimate a loss of $0.14 per share for the quarter, while improving 37% on revenue of $170.9 million. Last quarter’s subscriber additions (46% jump to hit 22 million) is expected to add to the results.

Last quarter, Roku posting better-than-expected growth, and shares surged more than 20%. On Wednesday, investors will be watching closely for any indications of this growth slowing.

The Los Gatos, California-based company has been broadening the customer base after launching its own TV channel last year, adding value to the network that continues to be a favorite among the company’s 21-million subscribers.

The Roku channel helped the company emerge as a full-fledged video streaming provider, on the lines of Netflix, offering a range of licensed films and free-to-stream TV shows sourced from television and cinema studios. The company’s user-base is more or less at par with industry leaders AT&T (T) and Comcast (CMCSA). 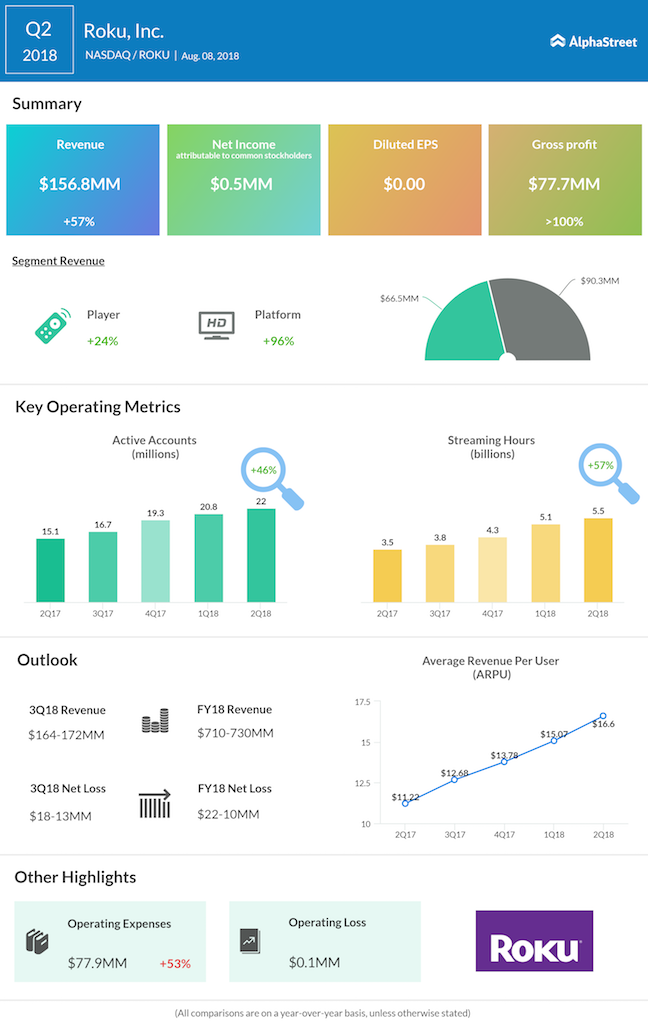 Announcing its fourth earnings report as a public company, Roku reported net income of $0.53 million for the second quarter, compared to a loss of $15.51 million or $3.18 per share in the year-ago quarter. The outcome came in above the analysts’ estimates and the company’s own guidance. The improvement indicates that Roku is moving closer to near-term profitability.

Net revenues jumped 57% year-over-year to $156.8 million, helped by yet another strong performance by the platform segment which recorded a 96% growth. Player revenues moved up 23%, and the top-line exceeded the Wall Street forecast.

By the end of quarter, Roku had made large strides in ramping up its streaming devices portfolio and forging partnerships with more and more television manufacturers. It had also been successful in raising subscriber base consistently and getting viewers hooked to its platform, all the while competing with the likes of Google (GOOG) and Amazon (AMZN).