Ross Stores (ROST) reported a 2% decline in earnings for the fourth quarter due to challenging multi-year comparisons and weakness in its Ladies apparel business during the holiday season. Despite results exceeding analysts’ expectations, the company guided earnings for the first quarter and fiscal 2019 below consensus estimates.

Net income declined by 2% to $441.7 million while earnings inched up by 0.8% to $1.20 per share on lower weighted average shares outstanding. The earnings per share reflected a one-time, non-cash gain of $0.07 related to the favorable resolution of a tax matter as well as a $0.19 benefit from tax reform legislation in the fourth quarter. 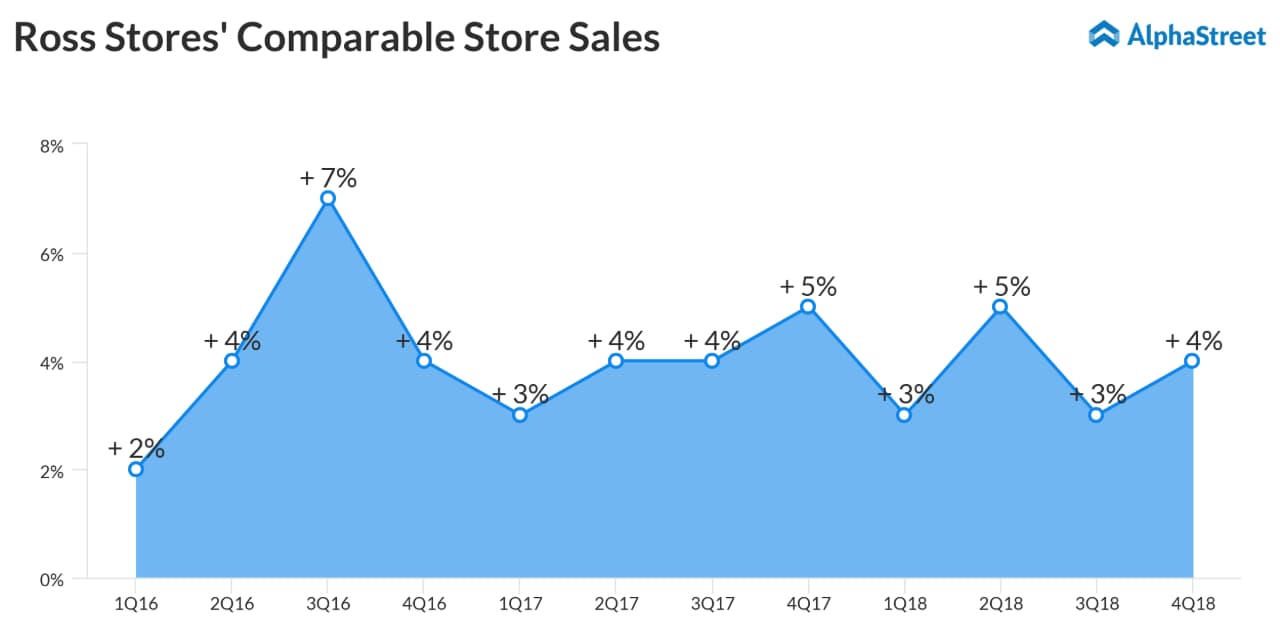 Looking ahead into the first quarter of 2019, the company expects comparable store sales in the range of flat to up 2% and earnings in the range of $1.05 to $1.11 per share. The earnings forecast included expectations for a negative impact from the timing of packaway-related expenses that benefited last year’s first quarter along with higher freight and wage costs.

For the fiscal year 2019, Ross Stores predicts earnings in the range of $4.30 to $4.50 per share, up from $4.26 in the previous year. Same-store sales are anticipated to grow in the 1% to 2% range on top of 4% gains in each of the past four years. The company also plans to open about 100 new stores this year, consisting of about 75 Ross Dress for Less and 25 dd’s DISCOUNTS locations.

The company’s board of directors authorized a new program to repurchase $2.55 billion of its common stock over the next two fiscal years. At recent stock prices, this new repurchase program represents about 8% of the total market value and a 31% increase over the prior 2-year $1.95 billion authorization that was completed in January 2019.

The board also approved an increase in the quarterly cash dividend to $0.255 per share, up 13% over the prior year. This higher quarterly dividend is payable on March 29, 2019, to stockholders of record as of March 18, 2019.

The company said the increases to shareholder payouts for 2019 reflect the current strength of its balance sheet and its ongoing ability to generate significant amounts of cash after funding growth and other capital needs of the business.

Shares of Ross Stores ended Tuesday’s regular session up 0.61% at $94.17 on the Nasdaq. Following the earnings announcement, the stock declined over 3% in the after-market session.