Schlumberger (SLB) enters 2023 on an upbeat note. What’s in store?

Shares of the company have been rising steadily after falling to a multi-year low around three years ago when operations were disrupted due to COVID-19. Currently trading well above its long-term average, the stock looks set to stay on an upward spiral this year, creating significant shareholder value.

Rarely did the stock look so interesting in the past as it is now, thanks to the low price and the company’s impressive financials. As per estimates, SLB should gain more than 16% by year-end. The reasonable valuation, when compared to the growing earnings, adds to the stock’s appeal. The strong cash flow should give the company fuel to continue returning capital to shareholders in the form of share buybacks and dividends. 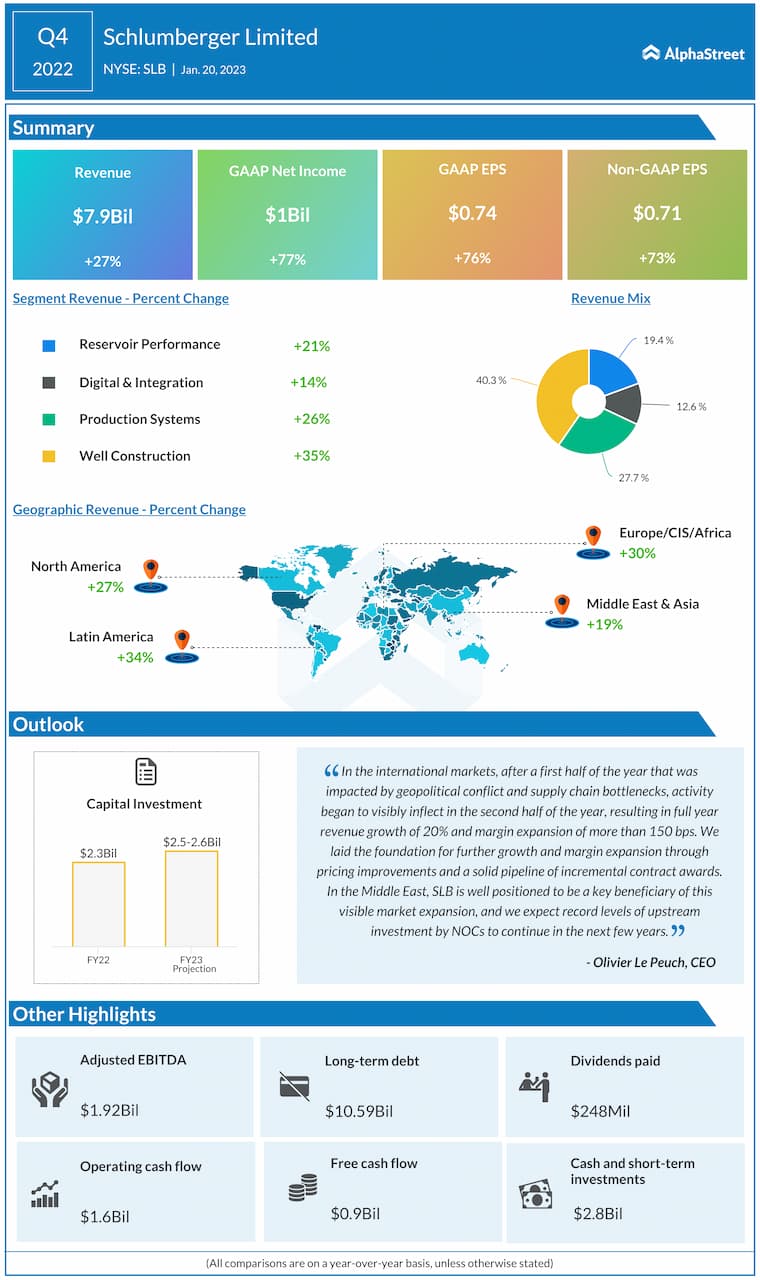 The company’s recent expansion in Russia, by signing new service-and-equipment contracts after rival energy firms discontinued operations in that region, will contribute to revenues going forward. While demand conditions look encouraging, fluctuations in oil prices and rising costs could be a barrier to achieving high growth in the near future. The other challenges are lingering supply chain issues and geopolitical tensions.

“Markets are poised for strong growth in the Middle East and Latin America geographically and more broadly in offshore and in gas. In the Middle East, we expect record levels of upstream investments, with a ramp-up in various capacity expansion projects designed to deliver more gas production and a combined oil increment of 4 million barrels per day through 2030. Offshore activity will continue to strengthen as tieback and new development projects mobilize and new FID are sanctioned, while Russian activity is expected to contract,” commented Schlumberger’s CEO Olivier Peuch.

Over the last decade, Schlumberger has constantly impressed its stakeholders by reporting strong quarterly earnings that mostly exceeded, or matched, analysts’ forecasts. The fourth quarter was no exception, with adjusted net income surging 73% to $0.71 per share. The stronger-than-expected earnings performance reflects broad-based growth across all four operating segments, which resulted in a 27% increase in revenues to $7.9 billion. The top line also came in above the consensus forecast.

Chevron vs. ExxonMobil: Which energy stock is a better buy?

The stock declined despite Schlumberger reporting strong Q4 numbers and issuing a bullish business outlook, and the weakness continued this week. SLB traded down 1% on Tuesday afternoon.