Earnings: Spotify swings to profit in Q3, but investors irked by topline miss

Spotify (SPOT) defied Wall Street expectations of a loss in Q3 by posting a profit of €0.23 ($0.26) per share. Analysts had projected a loss of 41 cents per share. However, the music streaming platform’s revenue of €1.35 billion ($1.54 billion) missed street projection of $1.57 billion. 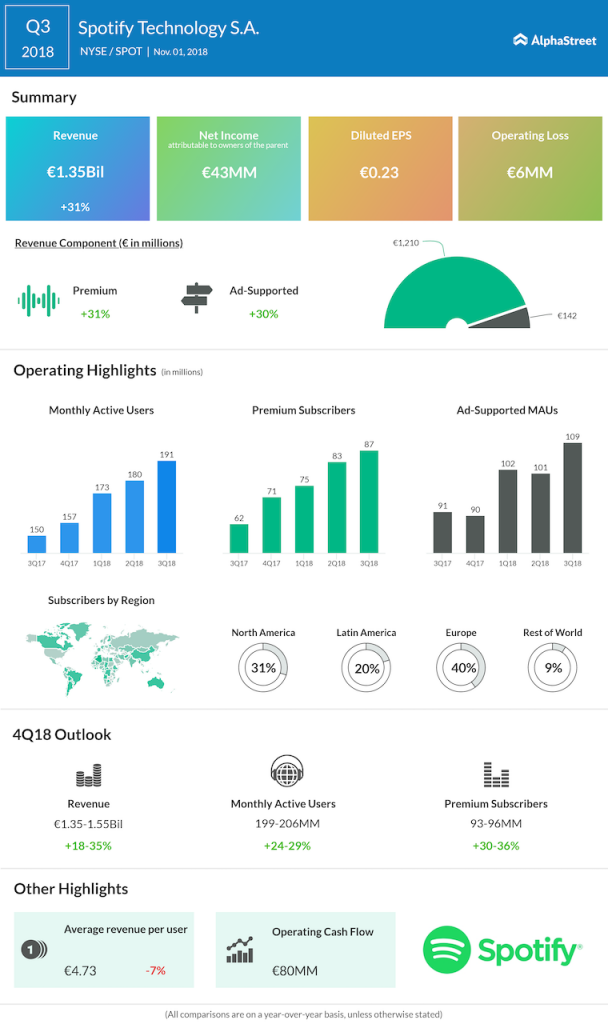 Monthly active users grew 28% to 191 million at the end of Q3, helped by solid growth in Latin America and Rest of the World. Driven by Student and Family Plans, premium subscriber base jumped 40% to 87 million during this period.

However, the success of these plans also put pressure on the margins, in turn, reducing its average revenue per user (ARPU) by 6%. Excluding its impact as well as the headwinds from foreign exchange, Spotify said ARPU would have declined 4%.

Spotify is experimenting with a game-changing ad system

Spotify, which competes with Apple Music, expects total revenue to grow 18-35% during the fourth quarter, riding on the back of a 24-29% growth in Monthly Active Users. The Swedish firm has also projected a 30-36% increase in Premium subscriber base.

Over the past three months, Spotify’s stock has fallen 23%, and over the past one month, it has dropped 21%, causing the company to lose a meaningful portion of its market cap.