Netflix (NFLX) has been facing stiff competition from streaming platforms like Amazon (AMZN) Prime Video, AT&T (T) Time Warner, and Hulu. In addition, Apple (AAPL) and Walt Disney (DIS) venturing into the content streaming service could give a tough fight for Netflix and this is likely to increase the top streaming contenders.

Speculations have been surfing up that Apple could officially launch streaming services at a March 25 event with a significantly delayed rollout date of mid-April. Also, the tech giant has been reportedly signing up with celebrities like Reese Witherspoon, Jennifer Aniston, and Steve Carrell for creating exclusive programs.

Rumors were rife that Apple was going around other entertainment firms for original content that will be produced by third-party media entities like HBO, STARZ and celebrity hosts. The Apple streaming platform is likely to debut in the US first followed by in more than 100 countries in 2019.

The hurdles have been mounting for Netflix as Disney is ending its streaming deal so it can launch its own subscription streaming service. Disney is expected to unveil more details of its streaming plans at its investor meeting on April 11. Netflix is likely to end its leadership in the video streaming service as Disney and Apple have planned their own services. However, with regard to original content and the volume of the content, Netflix still dominates in the sector.

Also, Netflix had about 139.3 million paid subscribers at the end of the fourth quarter as the company has expanded its subscriber base outside the US. In comparison, Hulu has upwards of 25 million. The pricing pressure has led Netflix to lift its subscription fees and this could give new entrants a better chance to attract customers from Netflix. 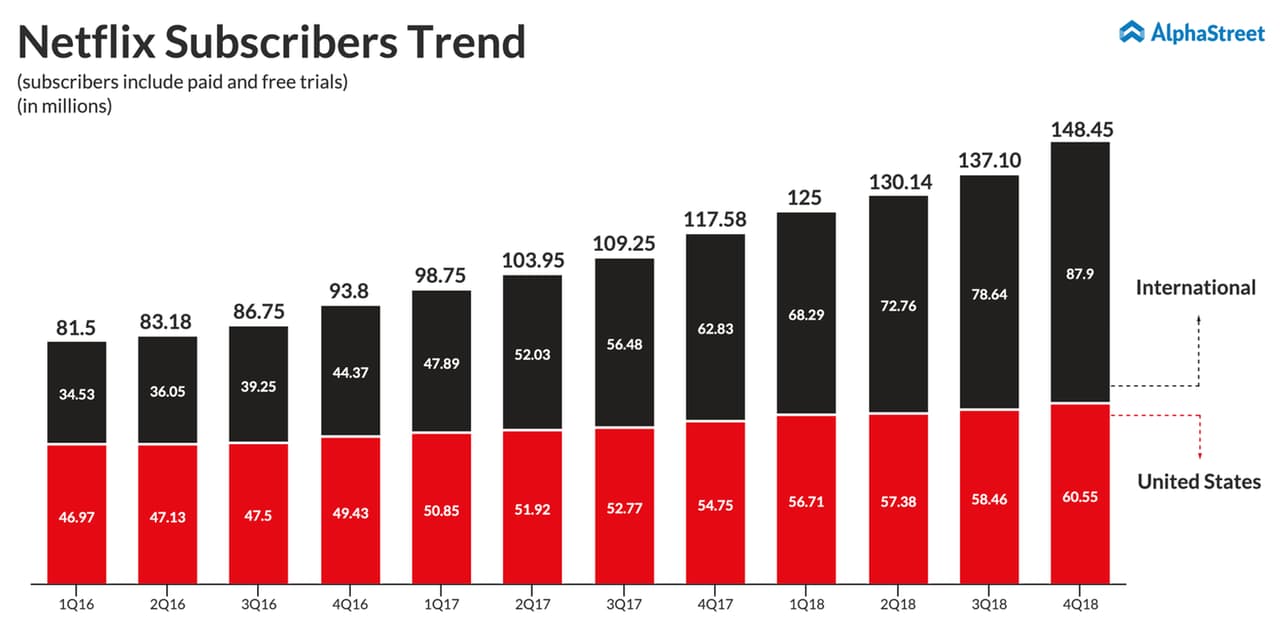 The company’s cash coffers have been burning up quicker-than-expected as Netflix has been creating content in regional languages for dominating in the international markets. This could further burden its liquidity and increase content production and licensing expenses through its subscriptions.

As more media companies are venturing into the streaming space, the content is likely to be restricted to their platforms alone. This could be fatal for Netflix due to the increase in costs associated with establishing partnerships or arrangements for accessing content.

Netflix has rewarded investors nicely as the stock rallying over 522% in the past five years and over 148% in the past two years. Shares of Netflix opened higher on Wednesday and is trading in the green territory.