Target Corp (TGT) on Tuesday reported fourth-quarter earnings in line with street expectations. Earnings for the quarter rose 12.5% to $1.53 per share, even as revenue remained flat at $22.9 billion. Analysts had predicted earnings of $1.53 per share on revenue of $23.15 billion.

Comp sales came in at 5.3%, higher than the 5% projected by the management. Last month, the company said its comparable sales for the November/December period grew 5.7%, helped by strong traffic and positive store comps.

Target was among the few retail players that did relatively well during the last holiday quarter, which was the slowest since 2009.

The company saw the strongest growth in toys, baby products, and seasonal gift items during the holiday period. Target has also been taking measures to improve its delivery service, and the acquisition of Shipt has benefited the company in this area. 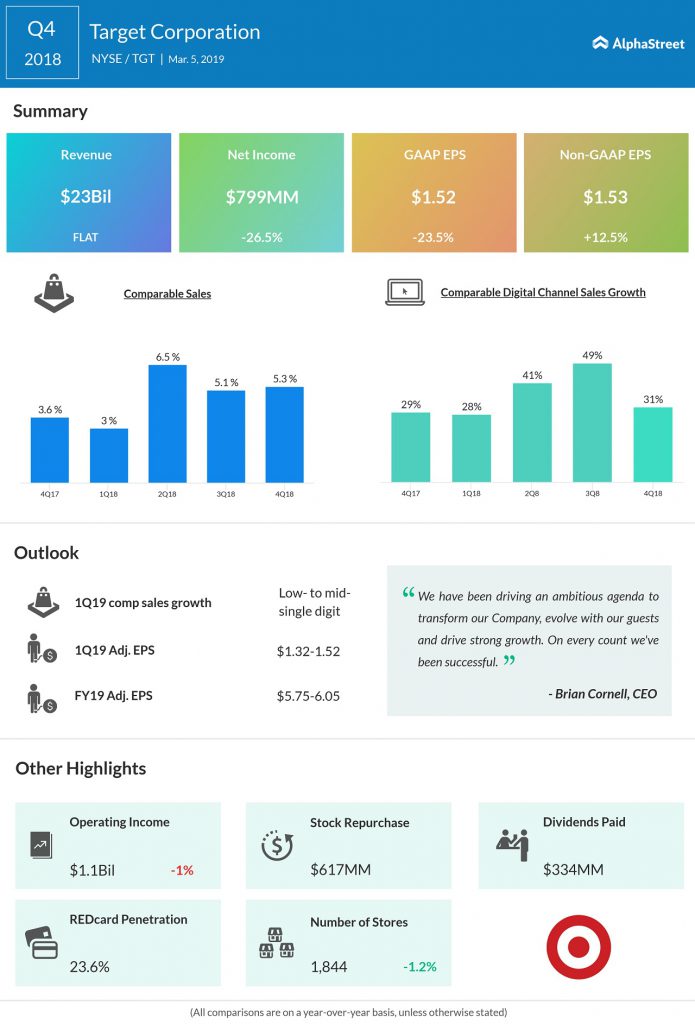 The Minneapolis, Minnesota-based retailer expects a low- to mid-single digit increase in comparable sales in the first quarter of 2019. During this period, Adjusted EPS is expected in the range of $1.32 to $1.52.

TGT shares rose 4.75% during pre-market trading on Tuesday. The stock has gained 9% since the start of this year, following a tumultuous second half of last year.

Target said last month that Chief Financial Officer Cathy Smith would be retiring from the company. Since her replacement is yet to be named, Target said that Smith would continue in her role as CFO till the process is complete, and then move to an advisory role until May 2020 to ensure a smooth transition.