Earnings Preview: Twilio expected to continue the momentum in Q2

Twilio’s (NYSE: TWLO) stock has been having a dream run in the bourse this year with the share price jumping 68%. The surge was attributed due to solid first quarter results and the closing of SendGrid deal. Twilio’s stock has soared 168% compared to last year July’s 52-week low level of $56. With the strong momentum, the cloud platform is slated to report its second quarter results on Wednesday after the bell.

The following are the key metrics to watch when Twilio reports its Q2 results on July 31.

For the second quarter, Twilio is expecting sales to come in the range of $262-265 million compared to $264.1 million estimated by the street. The company forecasts adjusted earnings to be between 2-3 cents per share, in line with 3 cents expected by the analysts. Investors would be expecting yet another earnings beat from the cloud platform, continuing last quarter’s performance.

Last quarter, the cloud communications platform also lifted its full-year projections. Top line is anticipated in the range of $1.10-1.11 billion compared to $1.11 billion estimates. Twilio expects Non-GAAP earnings of 11-13 cents per share and analysts are guiding 12 cents adjusted EPS, which is the midpoint of the guidance provided by the firm. 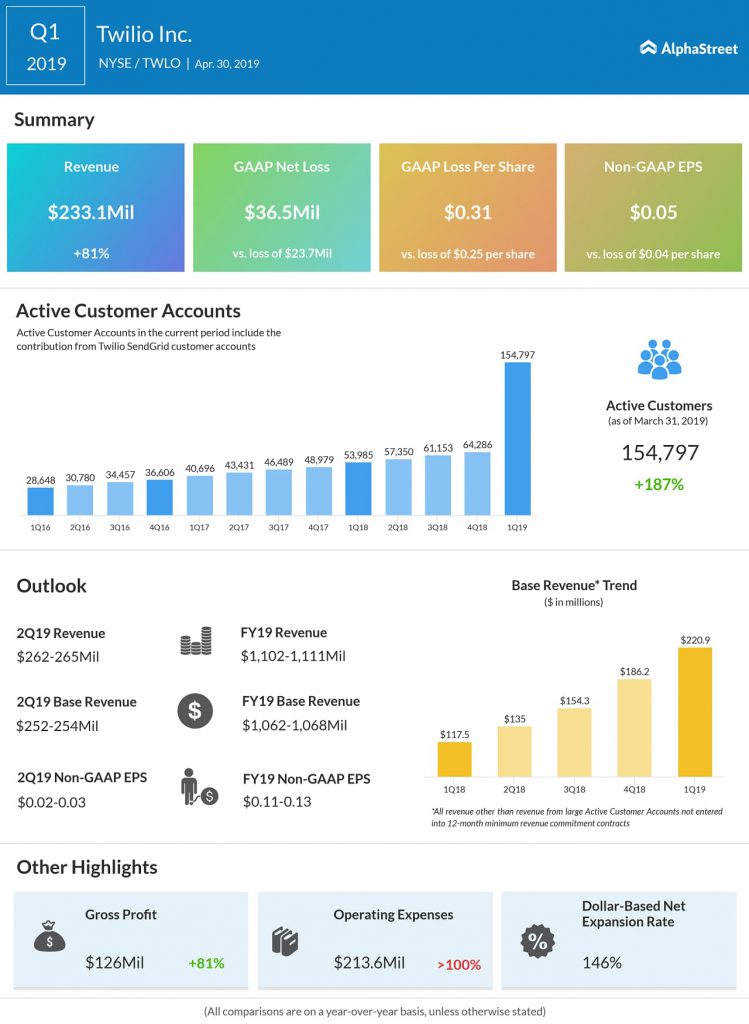 It’s worth noting that the outlook metrics would include the contribution from SendGrid deal which was closed in the first quarter. However, investors would be keeping a close watch on the fiscal outlook as they would be interested to know whether there are any upward revisions or maintaining the fiscal outlook.

Apart from the top and bottom line numbers, operating expense metric is important as the firm continues to ramp up its product offering by acquisitions, and expanding the sales and marketing team. Last quarter operating expenses surged to $213.6 million compared to $93.7 million reported in the prior year period. The jump in expenses was primarily due to the closing of the SendGrid acquisition.

Twilio’s active customers count has been growing steadily quarter-over-quarter since 2016. The company ended last quarter with 154,797 customers, jumping from 54,000-level reported in the prior year period. The jump in account base was primarily due to the addition of 84,000 accounts added through the SendGrid deal last quarter.

Investors would be expecting the account base to grow in the second quarter. Last year, top 10 accounts brought in 18% to the top line, a decrease of 1% over the prior year period. At the end of first quarter, the 10 largest accounts contributed 14% to the top line. It would be interesting to see how this metric is going to trend forward post the SendGrid deal in the latter half of the year.

Base revenues exclude revenues from its customers who don’t have a 12-month contract with the firm. This would give investors a hang on number of large accounts who enter into long-term contracts with the Twilio, which would bring in sustainable revenues reducing volatility. Last quarter base revenue improved 88% taking into account the SendGrid numbers.

At the end of Q1, expansion rate stood at 146%, an increase of 14% from the prior year period. The dollar-based expansion rate excludes base revenues from its customer base. This metric would help analysts to gauge whether Twilio is able to upsell/cross-sell its products to its existing large accounts, which has entered into long-term contracts. With the SendGrid deal completed, the street would be expecting this number to grow in the near future.

Even though the company is yet to report profits on a GAAP basis, the basic tenets of the business remains intact and Twilio has solidified its offerings compared to its peers with the SendGrid deal. The cloud-based platform already caters to the likes of Uber, Twitter, Lyft, Nordstrom, Box, Hulu, Salesforce, Twitch, Yelp etc. is expected to perform well to justify the high valuations.