Twitter (NYSE: TWTR) is scheduled to report its fourth quarter 2018 results on February 7 before the bell. The microblogging site is going to report its earnings just a week after its rival Facebook (FB) surprised with stellar Q4 results amidst multiple headwinds lingering the firm. Shares of the company rose 22% last year backed by the solid results reported by the firm in 2018.

The social conversation platform is heading into the Q4 earnings with a positive momentum it got from the previous quarter despite the ongoing clean-up of accounts and data privacy issues plaguing the Twitter and its peers. 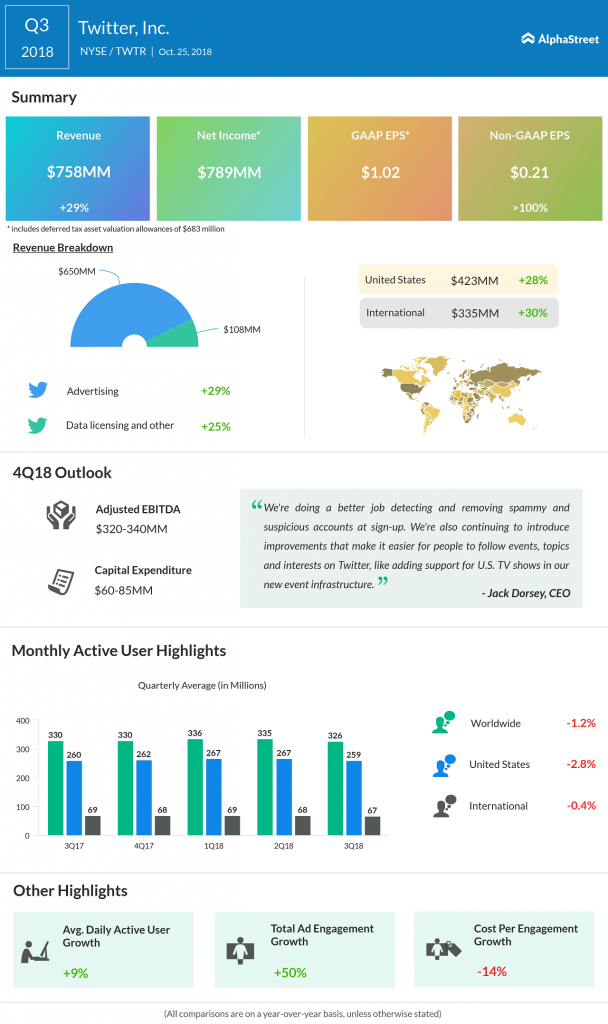 Twitter is expected to improve its sales by 19% to $869.5 million and EPS to come in at $0.25 compared to $0.19 reported last year, according to analyst estimates. In the prior quarter, the company hasn’t provided any revenue guidance. The social conversation site expects adjusted EBITDA to be between $320 million and $340 million and capital expenditures in the range of $60 million to $85 million.

Going by the better-than-expected results by Facebook in Q4, investors are expecting Twitter’s results to beat street consensus similar to last quarter. Apart from the headline numbers, shareholders will be watching how its key business metrics are going to come from Twitter.

In Q3, since the company was cleaning up fake and vicious accounts from its platform, monthly active users dropped to 326 million compared to 330 million users reported last year. The company has recorded a 4 million drop from Q3 2017 numbers, which is a concern for investors.

You May Also Like: A look at Twitter’s 2018 performance and 2019 expectations

The reason for the drop in users is due to the introduction of General Data Protection Regulation (GDPR) in the European Union and removing dubious accounts from the platform as part of the health initiatives Twitter is pursuing to make it a trustable platform for its users. It’s most likely the company’s user metrics might continue to drop in Q4 as the clean-up act would continue into the Q4.

On the flip side, users who are visiting the site daily rose 9% in Q3, which is an encouraging trend one can look out for in Q4.

Twitter’s biggest money spinner has been the revenue it receives from advertisers for displaying ads on its platform. Last quarter, ad revenues grew nicely by 29% helped by healthy contribution across all regions and product offerings.

As the microblogging site is entering into a seasonally strong quarter, ad revenues are expected to grow sequentially. However, Twitter is competing with more nimble rivals like Facebook (FB), Google (GOOG), Amazon (AMZN) and Snapchat (SNAP) for ad dollars. User stickiness and ROI would be the key factors advertisers would be looking for to increase ad spending on the microblogging platform.