Under Armour (UAA) is getting back on track: Should you buy the stock?

In the second quarter, the company turned to profit from a loss last year as sales almost doubled across all business segments

The growth plans of Under Armour Inc. (NYSE: UAA) suffered a setback following the outbreak of coronavirus last year, at a time when the sports apparel company was making progress in its efforts to come out of a long-drawn slowdown. But the company shrugged off the COVID blues in the second half and posted stronger-than-expected earnings since then.

In what could be the beginning of a much-needed recovery, the stock made strong gains this week, reflecting the positive second-quarter earnings, and reached a three-month high. Of late, performance has not been very impressive as the once-thriving stock maintained a perpetual downturn, except for a few short-lived rebounds.

The improvement is good news for shareholders, and the favourable valuation should encourage prospective investors to take the plunge. Experts are optimistic in their outlook on the stock, which is expected to grow by a third in the twelve-month period. Also, the management’s bullish guidance indicates the current momentum would be sustained during the remainder of the year.

The business entered a rough patch a few years ago, mainly due to the entry of new players into the American sportswear market and a challenging retail scenario. Also, certain initiatives of the management did not yield the desired results, like the partnership with Kohl’s Corporation (NYSE: KSS). Things have changed now, and the ongoing measures to strengthen the brand and boost e-commerce — under the new CEO Patrik Frisk – seem to be working.

The growth strategy centred around physical stores, rather than exploring multichannel opportunities, had invited criticism from stakeholders earlier. Probably, the company needs to focus more on innovation to stay relevant in a market that is ruled by the likes of Nike Inc. (NYSE: NKE). 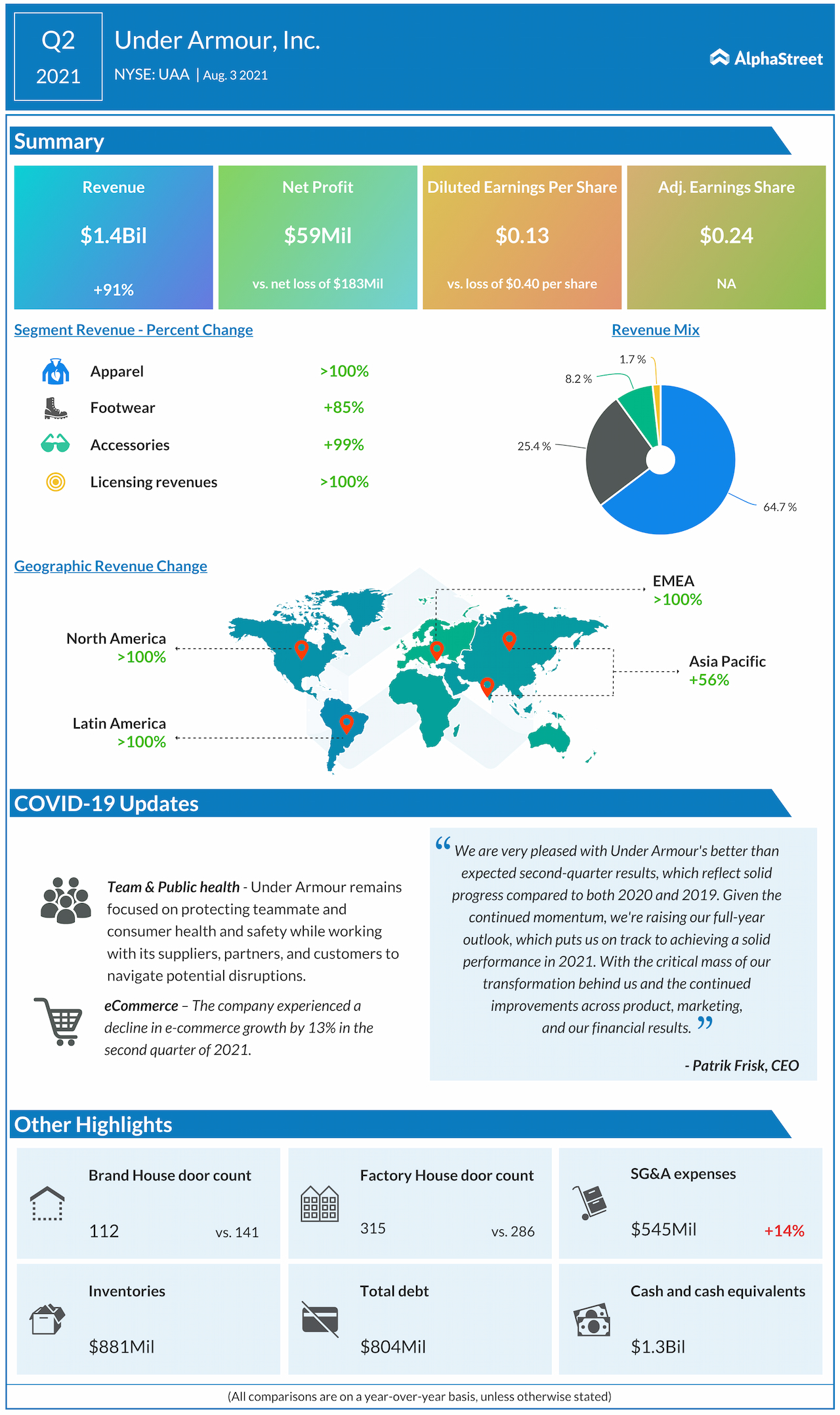 In the most recent quarter, the bottom-line bounced back into positive territory from last year’s loss as sales almost doubled across all business segments. At $1.4 billion, revenues were up 91% from last year and above the consensus estimate. Earnings, excluding one-off items, came in at $0.24 per share.

It is worth noting that the second quarter is traditionally a weak period for the company. Better pricing and a reduction in promotional activities contributed to margin growth this time. Earlier, the company had announced a restructuring plan to streamline the cost base for improving profitability and liquidity.

“From an owned store perspective, we experienced improved traffic trends and higher average selling prices in the quarter, driving better productivity and more normalized promotions. Longer-term, we remain focused on building the capabilities necessary to become a best-in-class retailer by creating incredible experiences in our full-priced brand house stores and better leveraging our factory house locations to drive greater overall profit,” said Patrik Frisk, chief executive officer of Under Armour, during his post-earnings interaction with analysts this week.

The stock traded higher in the early hours of Thursday, after closing the previous session up 7%, and stayed well above its 52-week average. The shares witnessed stable growth over the past twelve months, after slipping to the single-digit territory in the early weeks of the pandemic.