Yelp (NYSE: YELP) stock jumped 5% in the extended hours of trading after the company’s Q4 results beat estimates. The company’s board also doubled the share repurchase program to $500 million and plans to buy back $250 million in the first six months of 2019. The review platform also replaced three members from its board, largely after the pressure from activist fund SQN last month on the revamp.

For the fourth quarter, revenues improved 11% to $243.7 million while earnings per share came in at $0.37. The social review platform topped analyst estimates on both the headline numbers aided by strong advertising revenues and an increase in services revenue. Analysts were expecting Q4 EPS to be $0.13 per share on revenue of $241.19 million. For the same period last year, EPS was $1.6 and revenue was $218.43 million.

Reviews posted on the site improved 20% over the prior year, which reflects a healthy growth trend for more than two years in a row. On the traffic front, the number of unique devices using the app grew over last year but declined compared to last quarter. Desktop user traffic declined both sequentially and over the prior year period, while mobile traffic saw more users visiting the site over last year, but dropped 7.5% compared to the Q3 period. The company needs to step up its efforts to increase traffic to the site.

The number of paying advertising accounts improved 17% over last year but reduced marginally over the Q3 period. As the company is shifting its clients to non-term contracts, it has been able to add more clients to its platform. The 12% improvement in advertising revenues is driven by solid performance from the home and local services and restaurant verticals.

Yelp has inducted George Hu, Sharon Rothstein, and Brian Sharples into its Board. They will be joining the company on March 1 replacing Geoff Donaker, Jeremy Levine, and Peter Fenton. This is in line with what SQN had stated in January.

Last month, SQN stated that Yelp to shake-up the board and consider selling the firm to a private equity fund or a strategic buyer. The hedge fund cited poor performance as the primary reason for coming up with alternative options so that it could perform up to its potential. The tech-based hedge fund has a 4% stake in the review platform. The social review site had hired Evercore to help it tackle the push from SQN. 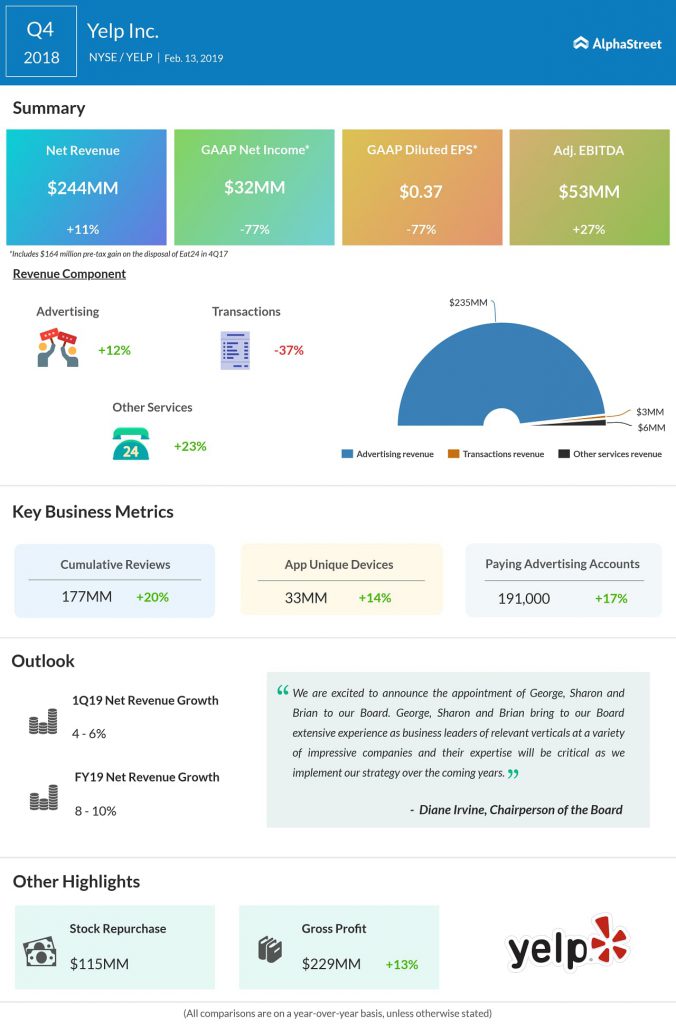 As the social review platform is undergoing transition on its go-to-market strategy, it has unveiled its five-year plan to create long-term sustainable growth. On a CAGR basis, revenue is expected to be in the mid-teens for the 2019-2023 timeframe. With an increased focus on reducing expenses, adjusted EBITDA is forecasted to be between 30% and 35% by 2023.

Yelp’s partnership with Grubhub (GRUB) has been coming along nicely as it would give the review platform to bump up the revenues without spending money on marketing. Along the same lines, the company has entered into partnerships with Visa (V) and GoDaddy (GDDY) which is expected to augur well for the firm in the near future.

Yelp has been struggling to cope up with the stiff competition from Google (GOOGL) and Instagram. The company still gets lion’s share of revenue from advertising. Since it has to compete with the likes of Google for ad spending from clients, investors are concerned about the firm ability to come up with a sustainable growth strategy.