Earnings Preview: Activision Blizzard to report muted Q1 results as it tries to retain its mojo 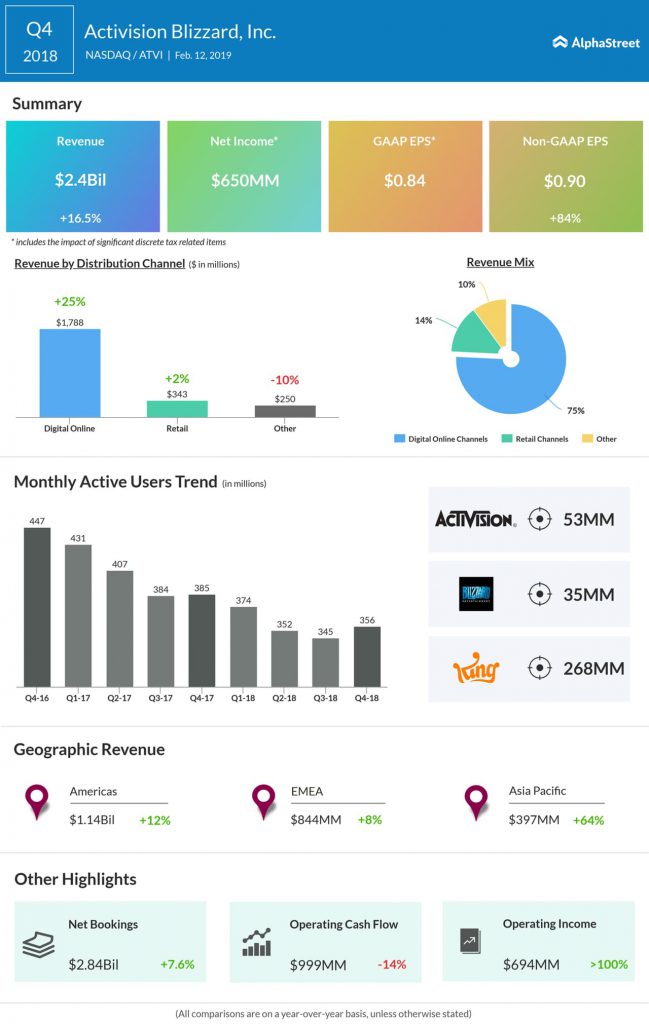 For the first quarter, the company expects revenue of $1.71 billion and non-GAAP earnings of $0.63 per share. Last year, revenue came in at $1.97 billion and adjusted EPS was $0.78. Activision is bracing itself for a muted Q1 2019 results due to multiple headwinds facing the firm.

Looking ahead for the full-year results, the gaming giant’s non-GAAP earnings is projected at $1.85 per share on revenue of $6 billion. Bookings are expected to be lower at $6.30 billion compared to $7.26 billion recorded in 2018.

The gaming industry has been witnessing a change in trends due to changing consumer behavior and mobile becoming the largest gaming platform recording strong revenue growth. Battle royale games have become an instant hit amongst gamers globally which has resulted in the rise of Epic Games’ Fortnite. Fortnite follows a free-to-play model where users need to pay money for accessing premium features.

The changing trend had put pressure on players like Activision and its peers like Electronic Arts (EA) and Take-Two Interactive (TTWO). All the three players shares plunged double-digits post their recent earnings result due to increased competition from the likes of Fortnite denting their profits. Activision plans to embrace the growing trend by providing battle royale mode and offering support across all form factors.

The company has been investing in esports category. Investors will be expecting more updates from the management regarding the performance of Overwatch League and how one can expect the category to contribute to the top line.

Mobile is emerging as the largest platform for gamers and it’s the fastest-growing among available gaming platforms. Activision plans to tap the potential and has announced its intention to bring all the existing games to mobile which would augur well for the firm in the near future.

The next big franchise

Activision’s peer Electronic Arts is slated to report it earnings on May 7 while Take-Two is reporting on May 13.