American Airlines (NASDAQ: AAL) reported better-than-expected results aided by strong travel demand. The airline stock which touched a new 52-week low level of $27 mark last month has recovered 26% and the share price has increased 8% in 2019. The board also issued a 10 cent dividend to its shareholders with the record date of August 7.

Relating to Boeing 737 Max fleet front, the airlines has 24 aircrafts now and has ordered 76 planes. In the second quarter, seven are expected to be delivered. Due to the MAX grounding issues, American pre-tax income was impacted by about $175 million due to flight cancellations.

With no clear signs of approval from the regulator, American has taken off all the MAX flights from its schedule and cancelled the flights till November. This is going to impact the full-year pre-tax earnings to the tune of $400 million. 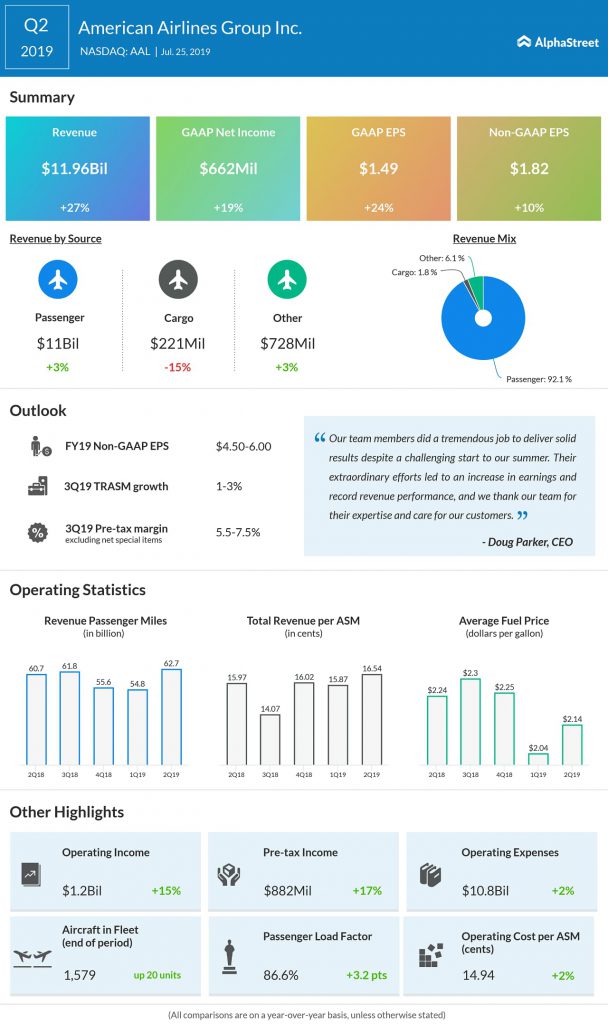 Cargo revenues remained weak decreasing 15.4% while improved revenues from the loyalty program boosted Other revenues by 2.9%.

Cost per available seat mile (CASM) increased 2.4% to 14.94 cents. Non-fuel costs rose 4.8% due to 737 MAX grounding issue and labor issue from the mechanics union. It’s worth noting that American is able to maintain its non-fuel costs despite the headwinds.