AT&T Inc. (NYSE: T) reported better-than-expected earnings for the first quarter of 2019 but revenues fell short of estimates. The stock was down 1.25% in premarket hours on Wednesday.

Consolidated revenues of $44.8 billion were up almost 18% from the same period last year, mainly due to the Time Warner acquisition. Declines in legacy wireline services, Vrio, wireless equipment and domestic video were more than offset by the addition of WarnerMedia, domestic wireless services and Xandr. 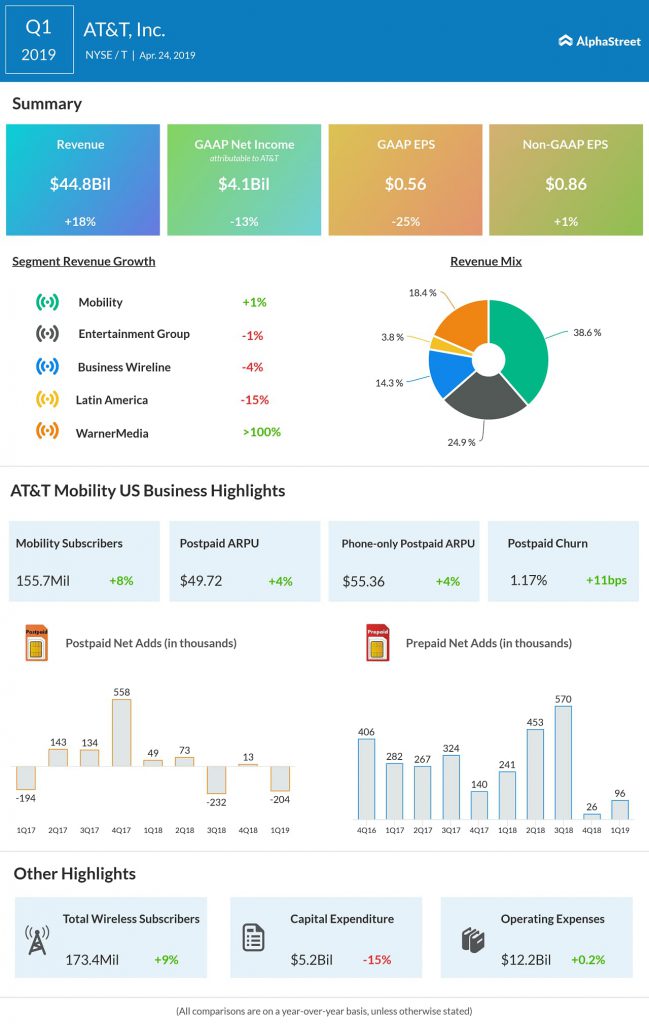 Revenue in the Communications segment dipped slightly to $35.4 billion from $35.5 billion in the year-ago period. Within Communications, Mobility revenues inched up slightly to $17.6 billion, helped by service revenue increases which offset declines in equipment revenues.

The Entertainment Group and Business Wireline units both saw revenues decline to $11.3 billion and $6.5 billion, respectively, due to declines in TV subscribers and legacy services and products.

Within Xandr, revenues grew by 26.4% to $426 million, largely driven by the AppNexus acquisition. In Latin America, revenues fell by 15.2% to $1.7 billion, mainly due to foreign exchange pressures. The company had 93,000 wireless subscriber net adds in Mexico.

Last week, AT&T sold its minority stake in Hulu back to the streaming video joint venture. The transaction valued Hulu at $15 billion, with AT&T’s 9.5% interest valued at $1.43 billion.