Earnings calendar for the week of April 26

Investor sentiment was hit by the government’s proposal to levy higher capital gain tax on wealthy individuals, and the market shifted to sell-off mode mid-week. The S&P 500 index retreated from last week’s peak but regained momentum on Friday. Dow Jones closed the last session down 305 points and slipped below the 34,000-mark. Meanwhile, the employment scene became more optimistic after weekly jobless claims dropped to a 13-month low.

Aviation and technology dominated the earnings scene this week, after a slew of bank earnings that marked the beginning of the season. United Airlines and IBM were among the major companies that reported on Monday, along with soft drink behemoth Coca-Cola.

Southwest Airlines and American Airlines continued their losing streak amid faltering passenger traffic and reported a double-digit dip in revenues. They were joined by tech firms Snap and Intel on Thursday. On Friday, American Express said its first-quarter profit more than doubled, aided by the release of loan-loss reserves.

After a busy week, the market is headed for more action-packed days with some major events lined up. All eyes are on FAANG components Alphabet, Apple, and Amazon – set to report on April 27, 28, and 29 respectively.

Another closely-followed event would be the third-quarter report of Tesla, at a time when the electric car maker is facing criticism for back-to-back crashes. It will be a mixed bag on April 27 when JetBlue, Advanced Micro Devices, Amgen, General Electric, and Starbucks are expected to report.

The important announcements expected on the next day include the quarterly reports of Boeing and Ford Motor Company. Exxon Mobil will be reporting on the last day of the month. 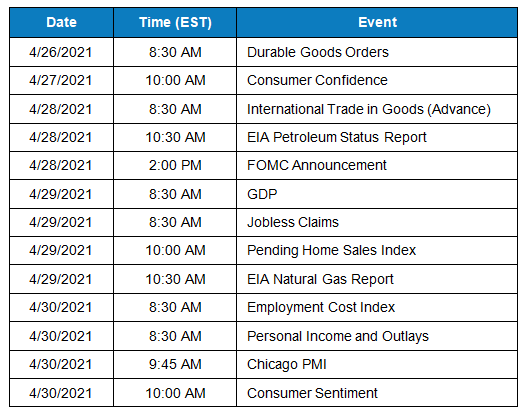 Energy giant ExxonMobil Corporation (NYSE: XOM) reported a profit for the second quarter of 2021, compared to a loss last year, even as operating conditions continued to improve. The results

Caterpillar reports a 29% rise in revenue in Q1