Earnings calendar for the week of March 22

The Federal Reserve’s bullish outlook on the economy, projecting a 6.5% growth this year, evoked mixed reaction as inflation fears dampened the positive sentiment. After hovering near the all-time highs, stock indexes Dow Jones Industrial Average and S&P 500 retreated mid-week. Meanwhile, the central bank kept the benchmark interest rate unchanged at near-zero and hinted at maintaining the dovish stance in the near future.

Tech stocks, including Wall Street biggies Microsoft, Facebook and Tesla, dropped in the last session, dragging down the benchmark indexes they belong to. On the other hand, bank stock in general stayed in the positive territory, partly aided by the favorable monetary policy.

Data published by the Labor Department showed jobless claims continues to stay above the pre-COVID peak, despite the recent moderation. Last week, around 746,000 Americans filed for unemployment benefits, marking a sequential decrease that can be linked to the ongoing macroeconomic recovery.

In another important tech deal, cloud communication platform Twilio bought ValueFast, an India-based provider of communications-platform-as-a-service. The other major transactions include the acquisition of European tech startup Fit Analytics by Snap and the buyout of environmental service company Desotec by Blackstone.

With the earnings season almost coming to a close, the markets cooled off this week, with the only important events being the financial releases of Nike and Dollar General that came on Thursday.

But all eyes would be on the year-end report of GameStop on that day, which was in news recently for the unusual stock rally that threw financial markets into a tizzy. The other closely-followed events are the quarterly reports of General Mills and KB Home, scheduled for March 24. 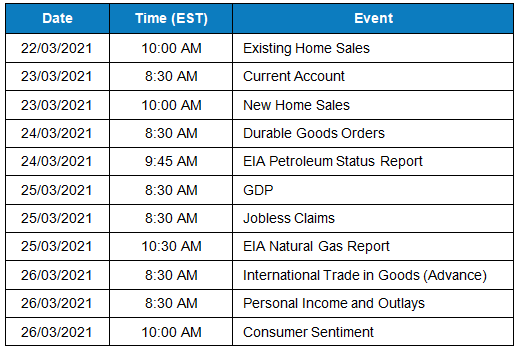