eBay (NASDAQ: EBAY)  once again surprised Wall Street on Tuesday by reporting stronger-than-expected earnings results in the first quarter. Income, on an adjusted basis, grew 26% to 67 cents per share, 4 cents higher than what the Street anticipated. 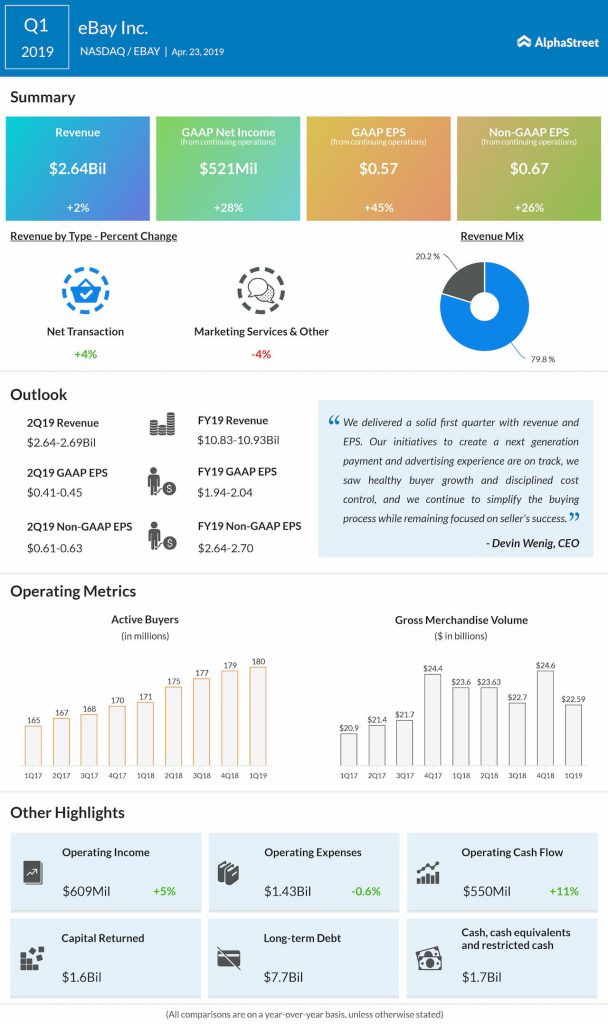 Despite a 4% slip in gross merchandise volume, revenue increased 2% to $2.6 billion. Analysts had projected Q1 revenues of $2.58 billion. In the quarter, eBay grew global active buyers by 4% across its platforms to 180 million.

Following the announcement, EBAY shares jumped 6% during after-market trading on Tuesday. eBay stock has fallen 13% in the trailing 52 weeks.

The e-commerce giant has recently come under fire for its underperforming units –  online ticket sales platform StubHub and Classified Ads. Earlier this year, activist investor groups Elliott Management and Starboard Value had asked eBay to consider divesting both the platforms.

READ: 4 THINGS YOU NEED TO KNOW AHEAD OF AMAZON’S Q1 RESULTS

While the San Jose, California-based firm had last month agreed to certain other demands set by the investment groups including the appointment of two independent directors, the company is yet to respond on what it plans to do with these two units.