e-Commerce behemoth Amazon Inc (NASDAQ: AMZN) is scheduled to report first-quarter 2019 earnings results after the closing bell on Thursday, April 25. Investor confidence is high on the stock, which has gained 22.6% since the beginning of this year. In comparison, the S&P 500 index has increased only 15.8%.

Wall Street projects Q1 earnings of $4.72 per share on revenue of $59.65 billion, representing a 17% increase from last year.

Here are four key things you need to know as you head into the first quarter results.

Slowing revenue should not be a concern, yet

Soon after Amazon reported its fourth-quarter results, investors sent the shares down over 2% on concerns over slowing growth of revenue. The stock picked up later on.

It’s true that there has been a slowdown in top-line expansion, which is natural for a company of its size. However, Amazon is planning to shell out more money to boost revenue performance this year. The effects of these additional investments should be visible by the end of 2019. Hence its too early to worry about the same at this moment.

If the company continues to display lackluster performance even after these initiatives, then it might be an indicator to reconsider the stock. 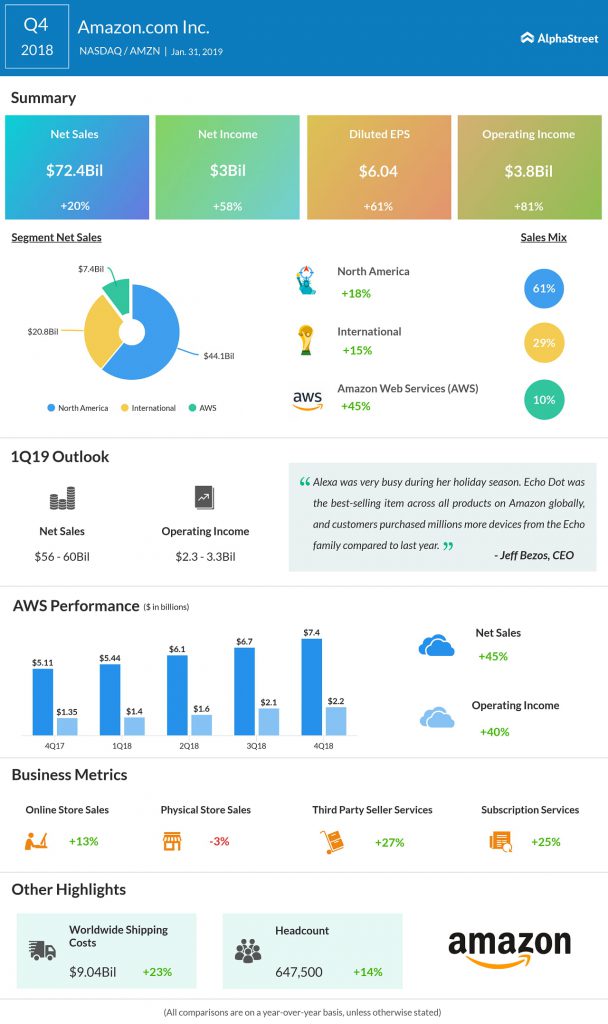 Prime is Amazon’s keyword to overcome retail weakness. As more customers opt for this flagship service, the company is expanding its ambit to pick-up services and grocery delivery. The company is hoping to maintain the momentum in Prime memberships by shelling out on improving distribution strength and expanding seller base.

The video streaming arm is also seeing a lot of capital deployment, in order to compete with Netflix (NASDAQ: NFLX) in terms of original content.

Amazon is leaving no stone unturned, offering competition to peer firms including Walmart (NYSE: WMT) and Target (NYSE: TGT) with its brick-and-mortar Go stores, which have been well received by shoppers.

Limelight shifting from retail to AWS

While retail continues to be the core operational backbone of Amazon, the staggering success of the lucrative Amazon Web Services (AWS) has made it the new torchbearer for the Seattle, Washington-based firm. A market leader in cloud services, AWS is getting rampant portfolio expansion, the most recent one being the introduction of document database service DocumentDB, which supports MongoDB (NASDAQ: MDB) workloads.

READ: EBAY POISED FOR ANOTHER EARNINGS BEAT IN Q1

Revenue from cloud services increased by 47% in 2018 to $25.66 billion. Operating revenue soared to $7.3 billion, up 68% year-over-year. Going ahead, cloud is set to become Amazon’s biggest income generator due to its profitable structure.

The early exit, while shocking to some, will save the company from losing a few bucks in the long term.