GameStop (GME) stays focused on transformation. Is the stock a buy?

In the second quarter, adjusted loss widened but beat the Street view after four consecutive misses

Video game chain GameStop Corp. (NYSE: GME) has been on a transformation journey, through various initiatives like revising the business model with focus on eCommerce and making major investments to tap into new opportunities. The company is often considered a laggard in the fast-growing gaming industry, due to the mass shift to digital entertainment platforms from physical game stores like those run by GameStop.

The Dallas-based company, a leading retailer of video games and entertainment software, scripted history early last year when the stock witnessed an unprecedented rally that resulted in a multifold increase in valuation. But the stock retreated from the short-lived highs in the following weeks and entered a volatile phase marked by many ups and downs. After dipping to a four-month low, the meme stock regained some strength last week following the earnings announcement.

GME is currently trading down 33% from the record highs seen more than one-and-half years ago. Despite the favorable valuation, market watchers are not very optimistic about the stock’s prospects. The company has been on a losing streak in the past few years as margins remained under pressure. All along, sales numbers fluctuated sharply reflecting the inconsistent demand.

In the July quarter, net sales declined 4% annually to $1.14 billion and missed consensus estimates, hurt by negative growth in the core business segments. Consequently, the adjusted loss widened to $0.35 per share from $0.19 per share but beat the Street view, after four consecutive misses. Interestingly, the earnings-beat outweighed the unimpressive numbers and the stock rallied, as it did every quarter this year. 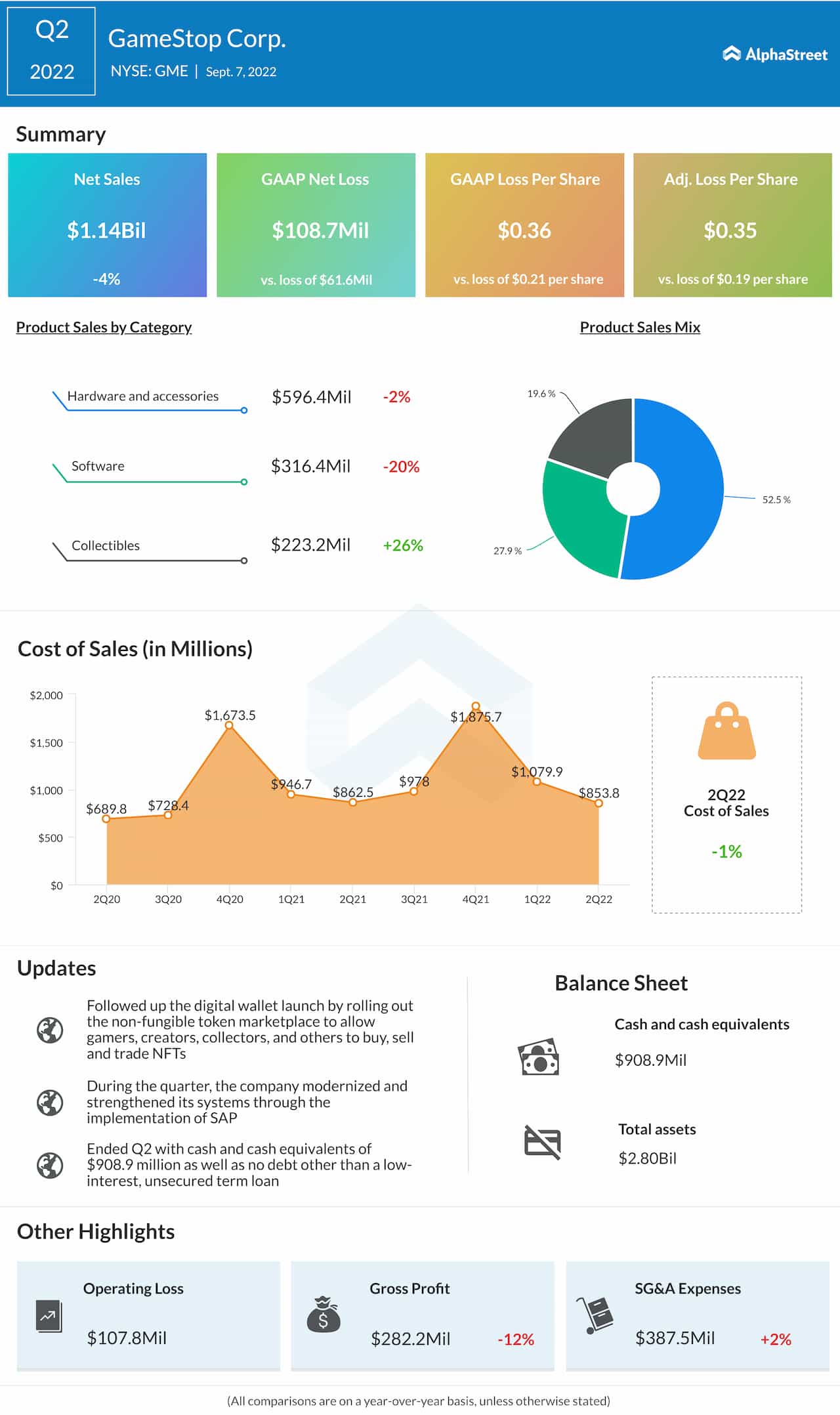 As part of its recovery strategy, the management has been looking to diversify the business and explore new revenue streams, lately. As a follow-up to the rollout of Digital Wallet, the company recently launched its non-fungible token marketplace to allow gamers and creators to buy and sell NFTs. The initiatives to streamline the business, like cost reduction, should offset the impact of the heavy investments to some extent. More recently, the company partnered with crypto trading exchange FTX US to collaborate on e-commerce and online marketing initiatives, as well as to sell FTX gift cards at select GameStop stores.

But future growth would depend on the company’s ability to achieve sustainable profitability, for which the management has set new priorities like the launch of proprietary products and continued investment in the brand and store network. It needs to be noted that customers do not buy video games in the physical format anymore, rather they would digitally install them into consoles or play their favorite games on the PC.

“When our board began turning over early last year, GameStop was saddled with significant debt, decaying systems, limited employee depth, and a host of other issues. This is why we spent the second half of 2021 and the first half of 2022 making up for years of underinvestment in modernizing the business. The upshot is we now have a more diversified product catalog, strengthened fulfillment network, improved tech stack, and e-commerce presence and fortified corporate infrastructure.”

Reversing the post-earnings uptrend, GME traded lower early Tuesday after closing the previous session higher. It has gained around 50% in the past six months.