General Dynamics (GD) kicked-off fiscal 2019 in style by reporting solid headlines numbers which surpassed analyst estimates. However, increased expenses dragged profits by 6.8%. The company saw healthy order flow from aviation and defense sectors which would be considered as a positive sign by investors. General Dynamics stock has increased modestly by 4% in the pre-market hours post the earnings announcement.

Revenue increased 22.9% to $9.3 billion aided primarily by aerospace and defense information technology portfolios. Top line exceeded analyst estimates of $8.84 billion. Earnings per share contracted 3.4% to $2.56 per share, impacted by the surge in expenses. However, this is better than $2.42 per share expected by the street. 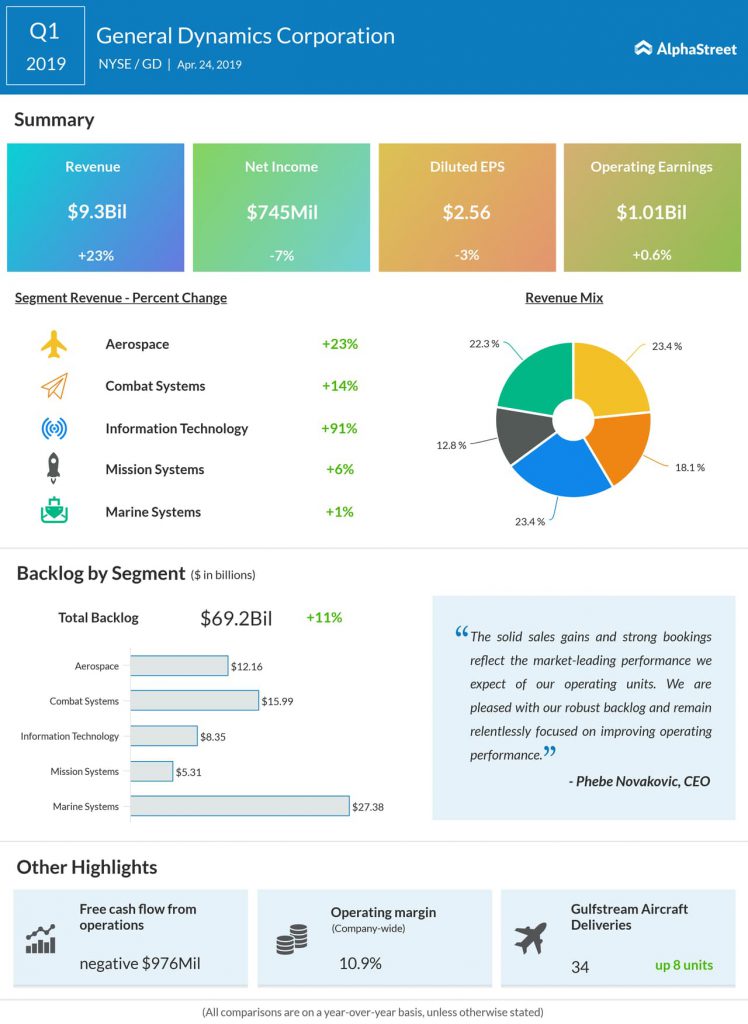 Last year, General Dynamics acquired CSRA for $9.7 billion. CSRA is combined with the GDIT post the deal. GDIT revenues doubled to $2.2 billion in the first quarter due to the revenue contribution from the CSRA deal. GDIT’s operating earnings also saw a jump of 54.5% offset by negative growth from all other segments.

General Dynamics’ margins reduced to 10.9% compared to 13.4% reported last year. The company saw a reduction in margins across the board due to increased expenses. However, excluding amortization costs relating to CSRA deal, margins would be 11.5%.

At the end of Q1, backlog improved 11.4% driven by GDIT, Marine Systems and a modest increase in the Aerospace front. Orders stood at $10.7 billion while potential contract value, including unfunded indefinite delivery, indefinite quantity (IDIQ) contracts, rose 33% to $33.9 billion aided by strong improvements in Aerospace and defense side excluding Marine Systems which saw a decrease in contract value.

Last quarter, the company provided an outlook for the fiscal 2019 period. EPS is anticipated in the range of $11.6 to $11.7 while revenue is expected to be about $38.5 billion and operating earnings around $4.5 billion. The street is expecting earnings to be $11.71 per share and sales of $38.56 billion.