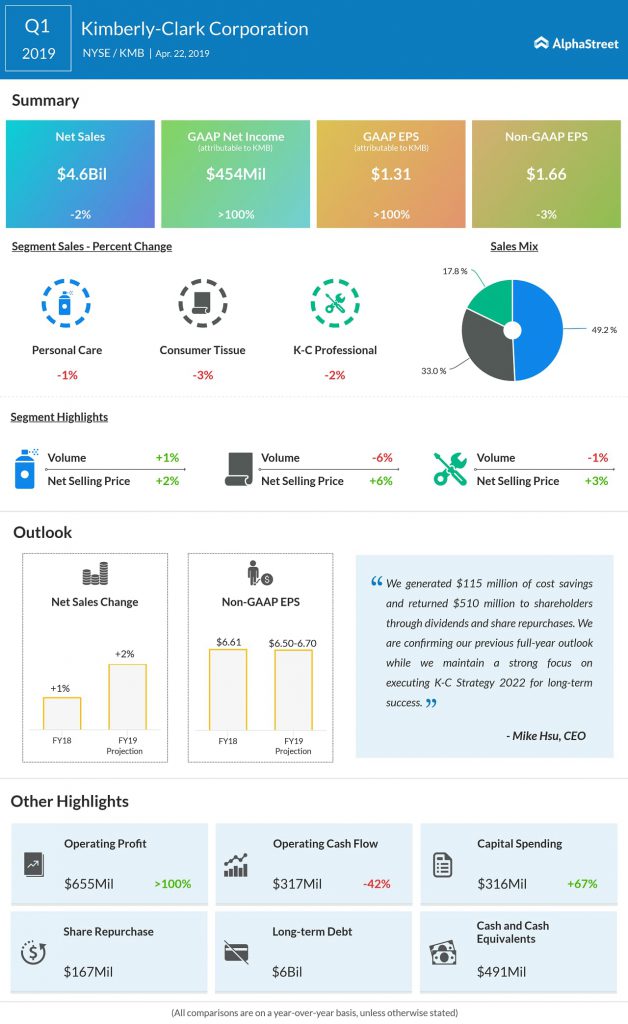 Analysts expected Kimberly-Clark’s adjusted earnings at about $1.55 per share on revenue of about $4.53 billion for the first quarter. Both metrics were beaten by the results.

Major consumer packaged goods manufacturers including Colgate-Palmolive (CL) and Procter & Gamble (PG) have remained on the sidelines as this quarter’s results could be hurt by currency volatility and continued inflation in commodities. Colgate is expected to post lower top and bottom lines for the first quarter, while Procter & Gamble’s third-quarter results are likely to stay low.

Kimberly-Clark CEO Mike Hsu, as the company announced quarterly results, commented, “…we generated $115 million of cost savings and returned $510 million to shareholders through dividends and share repurchases. We are confirming our previous full-year outlook while we maintain a strong focus on executing K-C Strategy 2022 for long-term success.”

Back in the first month of 2018, Kimberly-Clark flagged off a “2018 Global Restructuring Program” to cut its structural cost base and lift the company’s flexibility to invest in its brands, growth initiatives and capabilities critical to delivering future growth.

Now, Kimberly-Clark said it expects the program to generate annual pre-tax cost savings of $500-550 million by the end of 2021. “As part of the program, Kimberly-Clark expects to exit or divest some low-margin businesses that generate approximately 1 percent of company net sales. The sales are concentrated in the consumer tissue business segment. To implement the program, the company expects to incur restructuring charges of $1,700 to $1,900 million pre-tax ($1,350 to $1,500 million after tax) by the end of 2020,” a statement by the company read.

As of the currently reported first-quarter, restructuring charges were $152 million pre-tax and $122 million post-tax. In the quarter, the company said it recorded restructuring savings of $60 million.