Nvidia (NVDA) looks to beat slowdown with new products. Is the stock a buy?

Nvidia Corporation (NASDAQ: NVDA) is a diversified chipmaker focued on the graphic processor market. Having established a strong foothold in the industry, the company is well-positioned to take advantage of the rapid growth in gaming consumption and cryptocurrency mining.

Nvidia has brought cheer to shareholders every time it reported earnings because the numbers always surpassed estimates. Aided by the ongoing digital shift and the resultant surge in chip demand, the company’s revenues grew steadily in the last couple of years and reached a record high in the most recent quarter.

The market sell-off caused the stock to retreat from its November peak, paring most of last year’s gains. But the downturn looks temporary, if experts’ positive outlook on the stock is any indication – the consensus target price points to a 40% annual growth. In short, it is a good time to invest in NVDA now, since it is a rare opportunity.

The RTX 30 Series, the new-generation chip that has revolutionized gaming GPUs, continues to be a key growth driver for the company’s fast-growing gaming segment. The elevated demand for data center solutions, supported by the shift to remote and hybrid work, will continue to have a positive effect on the top line in the foreseeable future.

The company’s advanced solutions give it an edge over others when it comes to serving AI-supported data centers. It is worth noting that while gaming revenue growth decelerated sequentially in recent quarters, data center accelerated. The management is taking cost-cutting measures, like a reduction in hiring, to balance the additional costs related to portfolio expansion and product launches planned for the second half. 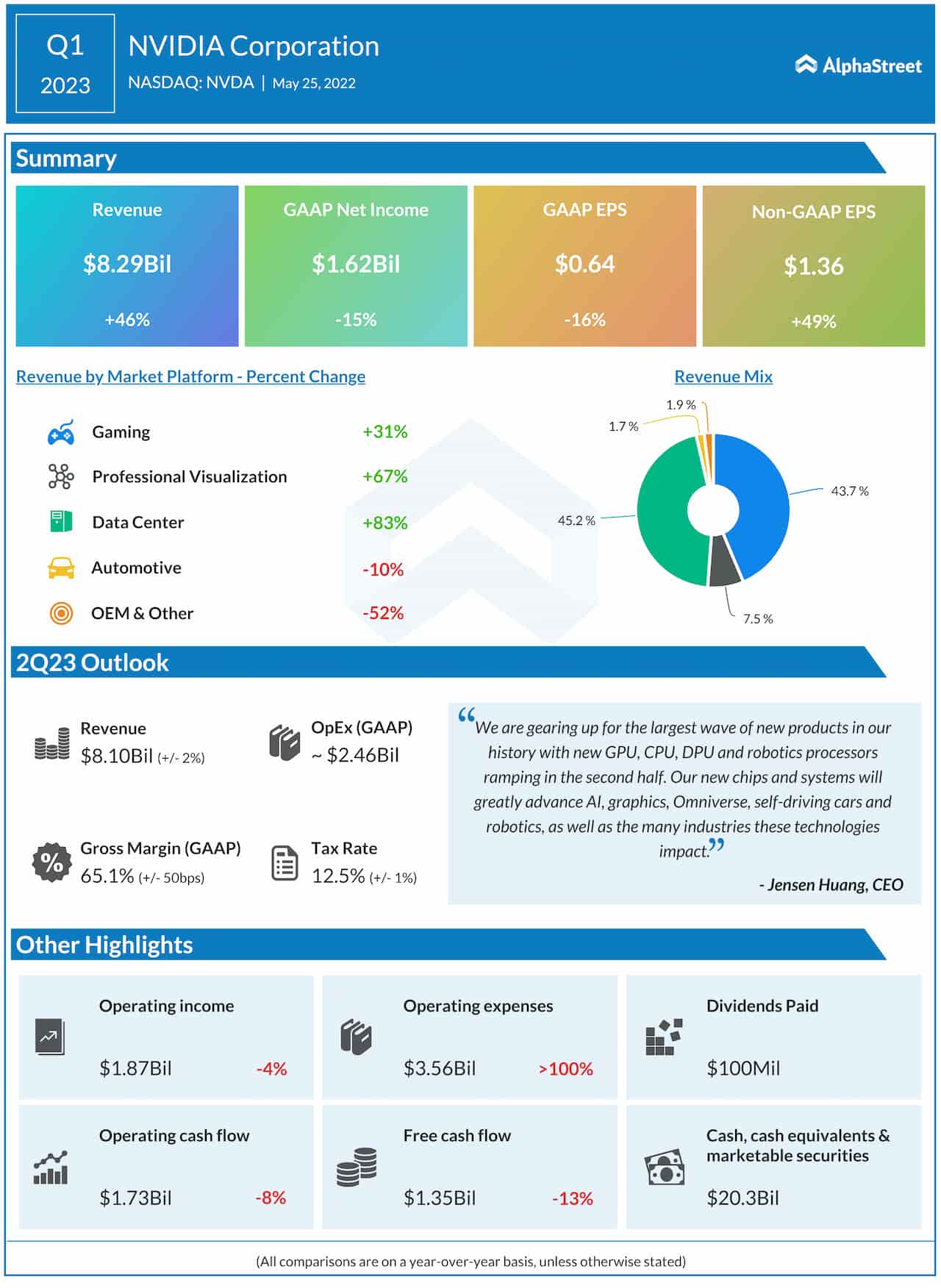 Continued growth in the company’s key business segments drove up first-quarter revenues to a record high of $8.3 billion, which also came in above the consensus forecast. Data center, which accounts for nearly half of the total revenues, expanded a whopping 83%, surpassing the gaming segment for the first time. As a result, earnings jumped 49% to $1.36 per share, despite being restricted by a sharp increase in operating expenses.

The company, which is gearing up for a series of product launches this year, issued second-quarter guidance that fell short of expectations. It is estimated that the booming gaming business would experience a slowdown because people now spend less time on leisurely online activities due to the market reopening. The other concerns are slowing PC sales and investors shifting from cryptocurrencies to safer assets due to rate-hike fears.

“As we expect some ongoing impact as we prepare for a new architectural transition later in the year, we are projecting Gaming revenue to decline sequentially in Q2. Channel inventory has nearly normalized and we expect it to remain around these levels in Q2. The extent to which cryptocurrency mining contributed to Gaming demand is difficult for us to quantify with any reasonable degree of precision. The reduced pace of increase in Ethereum network hash rate likely reflects lower mining activity on GPUs.”

Though the market was concerned about the management’s cautions guidance last week, shares of Nvidia shrugged off the initial weakness and made decent gains in the following sessions. The stock, which has lost about 36% so far this year, traded higher on Thursday afternoon.