PayPal Holdings (NASDAQ: PYPL) reported solid Q4 earnings beating street estimates aided by strong growth in customer accounts, payment transaction, and volume. Revenue for the quarter narrowly missed analyst estimates. Shares of the firm were down nearly 5% after the bell due to a Q4 revenue miss.

The company confirmed its outlook for fiscal 2019 provided last October. Revenue is expected to come in the range of $17.850 billion to $18.100 billion, which would have an impact of 3.5 percentage points due to the Synchrony’s US credit receivable unit sales. Adjusted earnings for the full year is to be between $2.84 and $2.91 per share which factored in acquisition-related costs. 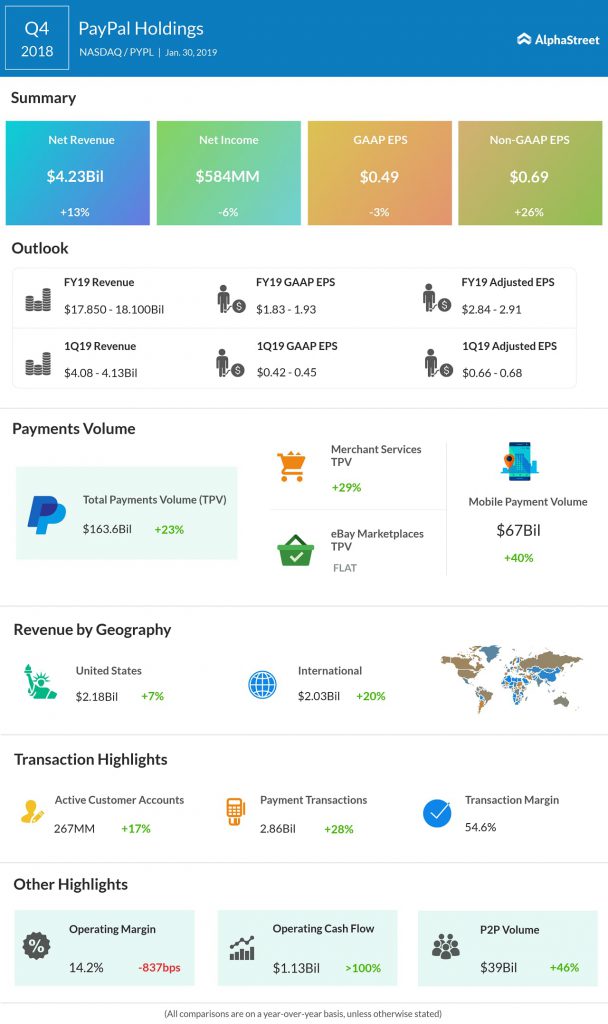 PayPal’s Q4 top line came in a tad below what street was expecting. The company reported 13% revenue improvement coming in at $4.23 billion hurt primarily by 7 percentage point impact from Synchrony’s portfolio sale. Analysts were expecting the payments company to comfortably beat the $4.24 billion estimate, which would disappoint investors.

Thanks to the acquisition of Hyperwallet and iZettle, net new active accounts spiked nearly 59% to 13.8 million with 2.9 million coming through acquired firms. Active accounts rose 17% to 267 million and payment transactions done by users increased 28% to 2.9 billion.

PayPal has acquired iZettle and Hyperwallet last year to expand its reach and augment its existing platform features. Both these deals are expected to be bump revenues in the near future on a sustainable basis.

Total payments volume (TPV) is one of the key business drivers for PayPal. Hence, TPV is closely tracked by the street to gauge the performance of the company. TPV surged 23% to $164 billion continuing the solid growth trend from the last quarter fueled by increased customer accounts and mobile penetration which is expected to act as a tailwind in the near future.

Mobile payments volume continues to witness solid growth and was up 40% helped by higher mobile engagement on the PayPal’s platform. It’s worth noting that payments done via mobile contribute 41% of the TPV.

Venmo on a roll

PayPal’s plan to monetize its P2P social platform Venmo seems to be working well. The social payments platform processed about $19 billion of TPV, which is an 80% jump over last year. P2P volumes recorded a strong growth of 46% touching $39 billion.

Last quarter, the company said only 1 out of 4 Venmo users are monetized, PayPal has a great potential to bump up its revenues from the platform.

Shares of PayPal has risen over 10% in the last 12 months and had increased above 10% this year.